The drinks giant will launch the "topper" in Ireland, the Netherlands and Poland early next year — before rolling it out to a further four European countries later in 2020 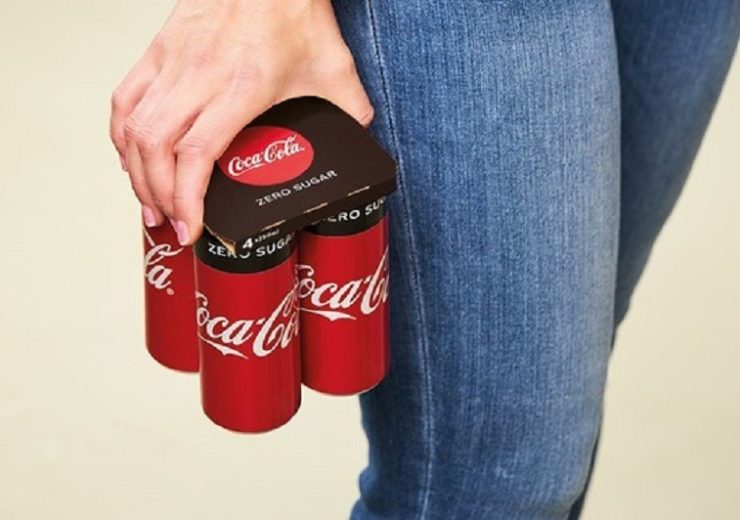 The Coca-Cola Company has launched a new range of paperboard “toppers” for its multipacks in Europe.

Designed to replace plastic shrink film, the KeelClip will be rolled out in Ireland, the Netherlands and Poland early next year, with Austria, Italy, Switzerland, and Romania following later in 2020.

It comes after last month’s commitment from Coca-Cola European Partners to remove all unnecessary or hard-to-recycle plastic from its portfolio — avoiding more than 11,000 tonnes of virgin plastic a year.

The company’s vice president, sustainability at Coca-Cola European Partners Joe Franses said: “Innovation is a key principle of our sustainable packaging work and the application of this fully recyclable paperboard KeelClip, which comprises a top board that the cans clip into and a central cardboard ‘keel’ — similar to a ship’s keel — that stabilises the pack, is another example of how we are delivering on our commitment to remove all unnecessary and hard to recycle single-use plastic from our products.”

KeelClip’s roll-out in the Netherlands comes off the back of a €14m ($15.4m) investment by Coca-Cola European Partners into its factory in the Dutch municipality of Dongen, designed to install a new can line and a KeelClip packaging machine.

Coca-Cola says the development will save 2,000 tonnes of plastic and 3,000 tonnes of CO2 annually, and will be used on all canned multipacks containing up to eight drinks.

Graphic Packaging International’s new product development and marketing director for its beverage division in Europe, Steve Gould, said: “The KeelClip technology is effective for can multipacks of various diameters and heights.

“This means that we can provide a safe, effective package with no need for secondary plastic.

“When businesses such as Coca-Cola HBC and Coca-Cola European Partners invest in these technologies, we can really make a difference to the way we package goods and drive the industry to continue to change too.”

As part of the initiative, Coca-Cola HBC will remove shrink-wrap from all its can multipacks in the European Union by 2021.

“Alongside the four water brands we introduced this year in 100% recycled PET bottles, the increased use of recycled PET and continued lightweighting across the portfolio, KeelClip is another demonstration of our commitment to delivering our World Without Waste goals.”