Hans van Bochove, VP of Coca-Cola European Partners, spoke at the Packaging Innovations conference on how his company is making packaging more sustainable 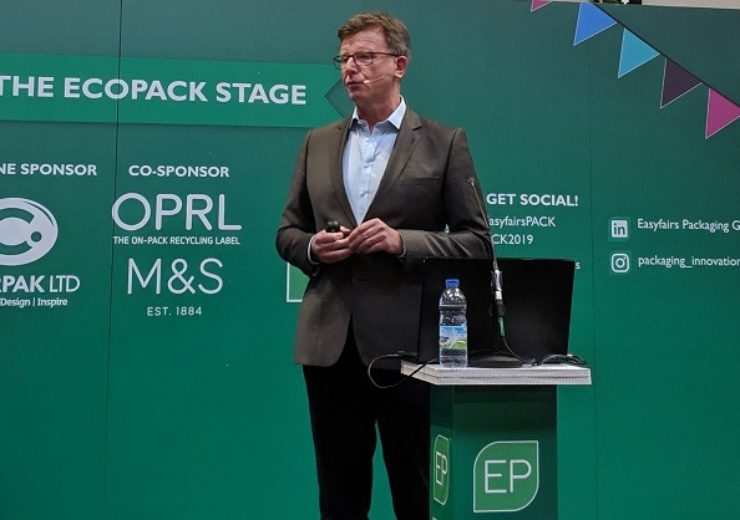 Materials used in packaging right now will be gone by 2023 as environmental regulation intensifies and sustainable alternatives are favoured, according to one of Coca-Cola’s top bosses.

Hans van Bochove, vice-president of Coca-Cola European Partners, says new EU laws such as the 2021 ban on biodegradable plastics and certain polystyrene for single-use items like cutlery, stirrers and straws are only the beginning.

Sustainable packaging has become a hot topic in the industry, with governments from around the world also putting in place regulations that will have a fundamental impact on how the industry operates.

Speaking during last week’s Packaging Innovations conference at the National Exhibition Centre, Birmingham, Mr van Bochove said: “Right now is the first time that products and materials for packaging are just straight up being banned from the market.

“I am sure if you come to this conference in two to four years’ time, you will find packaging materials that won’t be on display here anymore.”

Perception of plastic litter on the public

Mr van Bochove also discussed how companies’ products could be viewed because of the negative perception of plastic litter by the public.

“What is clear is that the emphasis is on plastic packaging and it has a serious effect on how consumers view it,” he said.

“You’ve got customers already reacting, and whether the actions that customers are taking are informed or not, it doesn’t matter – they’re doing it.

“If consumers start rejecting the packaging, then we have got a problem about our products ready to be used.”

This is a form of assessment that looks at the environmental impact at each stage of a product’s life.

Mr van Bochove said: “The only problem is this assessment doesn’t take into account the end-of-life waste phase and what happens if it becomes marine litter.

“Over the last five years, the word ‘carbon’ or the term ‘life cycle analysis’ has not been used once in that entire conversation in the changes in regulations by the EU.

Eighteen months ago, Coca-Cola’s European division unveiled its plans for sustainability, which aims to make 100% of its packaging recyclable.

Mr van Bochove said: “We have defined it as something that is recycled – not if it’s technically recyclable.

“If there’s not a generic infrastructure that the consumer can use to discard their packaging, then it’s not recyclable – it’s that simple.

“This was all nice 18 months ago, but it’s already obsolete.”

This is due to changing European Union rules, which includes the stipulations that 90% of beverage containers must be collected for recycling from 2025, with 35% of all the bottles being made up of recycled content.

Mr Van Bochove said: “Bottles are the only packaging that is mandated to use a specific amount of recycled materials. I can guarantee you that it’s the first but won’t be the last.

“Strategy-wise, there’s opposite universes that need to somehow be merged between businesses and regulations.

“Whether we like it or not there’s legal compliance, so if the law says X then we need to do X.

“There needs to be a logic of if it’s not recyclable, then why would you collect it to try to recycle it to begin with?

“If it’s recyclable and you want to try to recycle it, then you need to collect it.