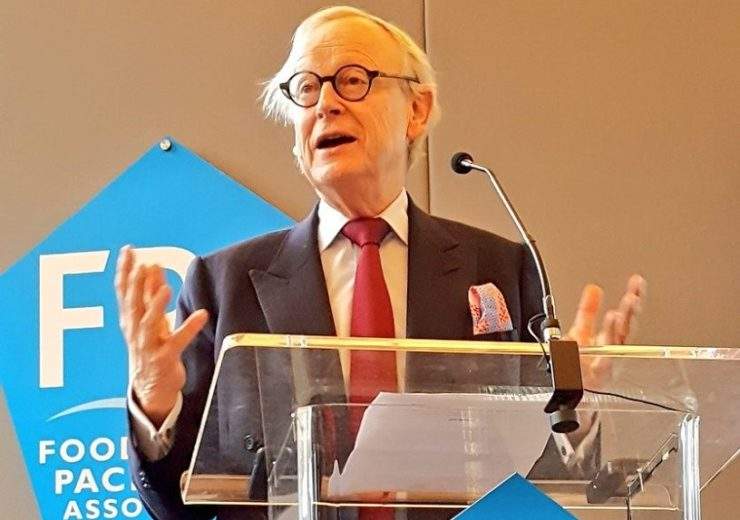 Former Environment Secretary Lord Deben says plastic packaging is important to our “way of life” – but admits society needs to be more conscious of its impact.

He added that Britain is a “dirty country” with a litter problem because recycling processes aren’t up to scratch.

Lord Deben said: “We have to understand that packaging is crucial to our way of life.

“It’s the way in which people have had – and continue to have – a better quality of life, which we cannot do without it.

“We have to remind people in this country that those in the middle of our cities have fresher food than they have ever had before and it is packaging that has made that possible.”

Lord Deben, who served as John Major’s Environment Secretary from 1993 to 1997, acknowledged how public awareness has become more engaged with the plastic waste issue.

According to Greenpeace, only 9% of plastic waste has ever been recycled.

It means 12 million tonnes of plastic ends up in the sea each year – nearly the same weight as a million London buses.

Since then, the European Union has banned single-use plastic products such as straws, cups, cutlery and cotton buds.

Lord Deben said: “There’s been a huge media maelstrom that has rightly drawn attention to the damage done to the environment – which is in general due to plastic waste.

“On the one hand, plastic does such damage but, on the other hand, packaging is so essential to the way we live, and the way in which we use our resources.”

Lord Deben on why Britain is a ‘dirty country’

One area in which the Conservative peer was critical was in the state of the UK with regard to littering.

“It does seem to me that we are a dirty country and we should really do more about it,” he said.

“If we don’t solve the litter problem, then people will put the blame on us [the packaging industry] because they always do.”

Lord Deben believes the packaging industry needs to develop a cohesive voice so it can “speak up for itself”.

He added: “But we have also got to speak up on our solutions to the dangers of plastic and for the threat it presents.”

Also speaking at the forum was Suffolk Coastal MP Dr Therese Coffey, a parliamentary under secretary of state for the environment, who outlined the Packaging Recovery Note scheme.

This provides evidence that waste packaging material has been recycled into a new product.

Dr Coffey said: “We want to place greater responsibility on producers to reduce unnecessary packaging, and use packaging that can be recycled and pay for the managing of that packaging once it becomes waste.”