Meet Splosh: The UK business reducing plastic through the power of pouches

Prior to setting up Splosh in 2012, Angus Grahame founded the the UK-based online gift experience company Activity Superstore 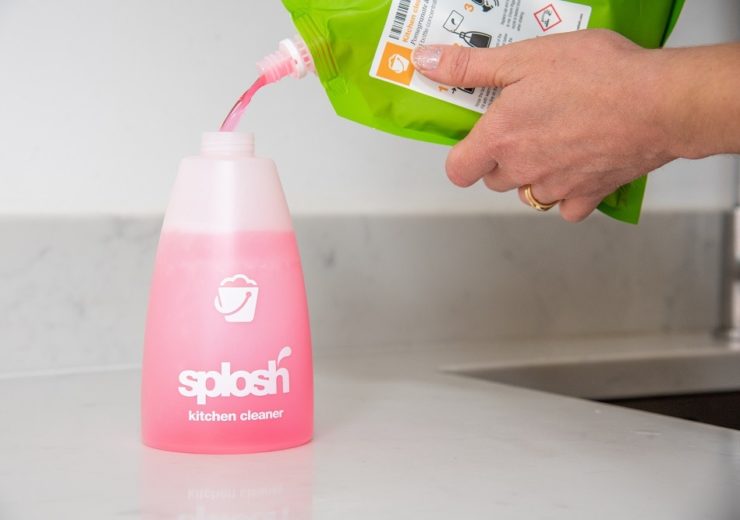 According to Splosh, the consumers that use its service have saved nearly 400,000 bottles from going in the bin (Credit: Splosh)

Uptake and interest in online reuse schemes from consumers has grown over recent years, and one business involved in this marketplace is UK-based firm Splosh. Thomas Parker speaks to entrepreneurial founder Angus Grahame to find out what it’s all about.

Described as the “modern-day milkman”, reusable packaging schemes have been in vogue in recent years.

At its core, the system is designed to keep an item in use for as long as possible – with a consumer sending a container for products such as washing up liquid, shower gel and detergent back to a business to be refilled and then used again.

Consumer product giants such as P&G and Unilever have jumped on the bandwagon by employing recycling charity TerraCycle’s Loop delivery service for reusing cleaning products and toiletries.

It’s being trialled in New York and Paris – with a test in London due to begin this year – but UK-based company Splosh has taken the innovative concept further by bringing a “truly circular economy business model” to the table.

Unlike Loop, which acts as the middleman in the delivery service, Splosh supplies both the reusable containers and the actual products developed they are used for via a web platform.

Already, it has built a 20,000-strong customer base, which it claims has saved nearly 400,000 bottles from going into landfill.

And Splosh claims that by using this system, consumers are cutting their plastic waste by about 90% compared to using a standard disposable bottle.

Angus Grahame, founder of the Herefordshire-based firm, explains: “Using a digital platform to sell the products rather than a physical shop allows us to have a completely new business model that separates the bottle from the product.

“This makes refilling easier and less disruptive than recycling, which really resonates with consumers who are sick of brands that have created this plastic waste over the last few decades.”

From selling gifts to sending out reusable bottles across the UK – how was Splosh started?

An entrepreneur at his heart, Grahame entered the business world in 1997 when he founded Activity Superstore.

A website that sells gift experience days – ranging from zorbing to afternoon tea – he sold his stake in the firm as part of a management buyout.

Leaving the business, Grahame wanted to build a brand that had a positive impact on the environment, settling upon trying to reduce plastic waste.

Recalling how Splosh came to be in 2012, he says: “The real light-bulb moment for me was when I was doing my recycling at a Co-op supermarket a few years ago.

“I was putting plastic bottles into a recycling collection bin and saw someone who was coming out of the store with those same types of plastic bottles, and I thought ‘there’s something badly wrong here’.

“From that point, I wanted to develop a refilling system that would be effective and easy for customers.”

Refilling bottles through the power of pouches – how does Splosh work?

When a consumer first signs up to the service, they receive one of the firm’s three starter boxes that provides them with bottles for cleaning products and toiletries such as detergent, washing-up liquid and shower gel.

Alongside this, users are provided with Splosh’s refill pouches containing concentrates that can be turned into goods like washing-up liquids by adding water.

All these products are designed to be placed into the containers.

Once the pouches have been used up, the consumer sends them back to Splosh, where they are recycled and turned into new products like ice scrapers by the company.

It then sends more pouches for follow-up orders in a subscription service.

Grahame says: “The focus on developing the concentrates gave us two big advantages.

“One was we were able to sell directly to customers, meaning we could cut out the supermarkets.

“This is because our pouches are so small, which means they can fit through letter boxes, making them easy to deliver.

“The other big advantage from concentration was it allowed us to have a refillable system that’s disconnected from the packaging.”

A closed-loop circular economy – in which materials are used repeatedly by one company throughout its life cycle – allows the consumer to be “uniquely connected” to the system, believes Grahame.

He says: “The alternative is you put the plastic out for recycling, you do not know what happens to it – and you usually don’t want to know.

“The fact that we control a material over its entire life cycle is absolutely critical, and our view is the plastic material is not waste as it’s literally a resource for new product.

“Once the pouch comes back to us, that’s it, the loop is closed and it doesn’t go to waste.”

Reuse schemes are becoming increasingly popular with consumers, with there being a surge of people signing up to services such as milk bottle delivery systems in recent years.

Of those signed up, 90% said they had chosen to have their milk delivered in reusable glass bottles.

Despite this jump in uptake, there are some issues with making these types of systems mainstream – one being the cost of its implementation.

According to research by the European Commission, reuse and refill schemes could work out to be up to five-times more expensive than single-use packaging.

Due to this expense, there’s a perception in some quarters that these types of systems are, more often than not, mainly taken up by people who can afford to pay a little more to reduce their use of plastic.

Grahame certainly identifies this in a certain part of Splosh’s consumer base, and believes the only way make the system a success is to make it cheap, easy and convenient.

He adds: “Ultimately, we want to appeal to someone who cares only a little about plastic waste but wants value, easy ordering and zero hassle.

“We want a consumer who says ‘okay, I might as well subscribe to all this stuff as it means I won’t have to go to a supermarket ever again, and the fact that I’m cutting out plastic waste is just a bonus’.

“I’m sure in the future we’ll find those consumers who see plastic as just one of a number of purchase decisions.”

Conagra Brands aims to use recyclable packaging by 2025

FrieslandCampina to introduce paper straws for its European packaging products