Unilever’s sustainability chief on industry collaborations and relationships with NGOs

Louis Lindenberg was speaking about the beneficial, albeit sometimes love-hate, relationships between industry and NGOs at the Sustainable Packaging Coalition's Engage conference in London 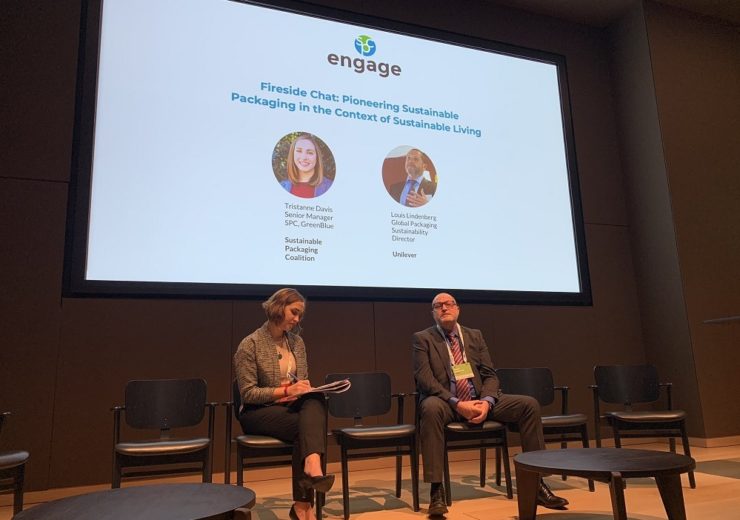 From Coca-Cola and PepsiCo to Unilever and Procter & Gamble, the issue of sustainability tops of the agenda for most consumer product manufacturers — with environmentally-friendly packaging the hottest topic of all.

Forging commitments towards this objective include initiatives such as the Ellen MacArthur Foundation’s New Plastics Economy — committing signatories to make 100% of their plastic packaging recyclable, reusable or compostable — alongside targets set-out by an array of businesses such as Coca-Cola’s ‘World Without Waste’ programme.

Consumer product manufacturer Unilever is another company at the forefront of this push, making waste packaging one of the key pillars of its Sustainable Living Plan (USLP).

Beginning in 2009, the current incarnation of USLP sets the company’s pathways to achieving three all-encompassing goals:

“It’s about growth in the business and decoupling to ensure that the business grows without having an impact on society and the environment.

“So that was and still is the key feature in terms of sustainability.”

Seen by many as one of the industry leaders when it comes to tackling the issue of packaging waste, the company is on-target to halve the waste associated with the disposal of its products by 2020, a 29% drop since 2010.

In 2017, Unilever committed to making 100% recyclable plastic packaging by 2025 and halve its use of new plastics in its packaging by the same year.

Alongside this, in conjunction with the likes of L’Oreal, Mars and The Coca-Cola Company, Unilever one of the first signatories of the New Plastics Economy.

Lindenberg says many of these commitments were initially driven by the company’s former CEO Paul Polman, with current incumbent Alan Jope carrying on the work.

He said: “We were very privileged to have Paul, and in the time I have been working with Alan, I have seen that he has mentality that this is the right thing to do.

“The first thing is he’s very passionate about these brands and he is pushing that message very very hard that the brands need to do the right thing and there is a social kind of aspect to it.

“I don’t believe that Alan is completely following in Paul’s footsteps, I think he’s doing it in his terms of how he’s pushing the business and really driving us much harder.

“These targets are tough, let’s make no joke about it, they are tough, he’s passionate and has instilled right throughout the business this message from the top to the bottom, this is what we are going to do.”

When it comes to communicating the issues of single-use plastics and pointing out shortcomings in businesses, non-governmental organisations (NGOs) play a huge role.

Greenpeace recently released a report stating Coca-Cola, Nestle and PepsiCo were among the top plastic polluters globally after a beach clean-up campaign involving more than 50 countries.

This kind of coverage can have a detrimental impact on the reputation of businesses, as consumers have become extremely well-informed over the environmental dangers of single-use plastics.

Lindenberg believes NGOs play an important role in raising some of these problems with companies, and says Unilever has close communication with organisations such as Greenpeace.

He said: “The way that we manage poor media coverage from NGOs is firstly not to run or shy away from it, so we are engaged very much with the likes of Greenpeace and others.

“Alongside this, before any topics from the NGOs are announced, we would have discussed it already with them and example what we plan to do, so we try and get them to support us.

“An NGO is going to be an NGO, and they have their role to play in society as an activist, but they can be very useful in helping companies to think about how you manage things, where you want to go, what your programme should be looking at.

“And they can also challenge you in certain aspects in saying, ‘look, perhaps you should think differently about this,’ it’s a bit of a love-hate relationship, but try and keep them on your side.”

‘Industry needs to work together to enact effective change’

In the past 18 months, a wide range of collaborations between packaging and consumer product developers have been created to tackle the single-use plastic problem.

These range from the Plastic Pacts set-up by the Ellen MacArthur Foundation in France, Chile and the UK, to the Alliance to End Plastic Waste, with businesses working together to develop strategies to become more sustainable.

Lidenberg believes these kind of partnerships are important, as it gives industry a clear, unified direction to tackle the issue.

He said: “If we make our packaging with recyclable material and put it into the marketplace, and others don’t do the same thing, it’s pointless.