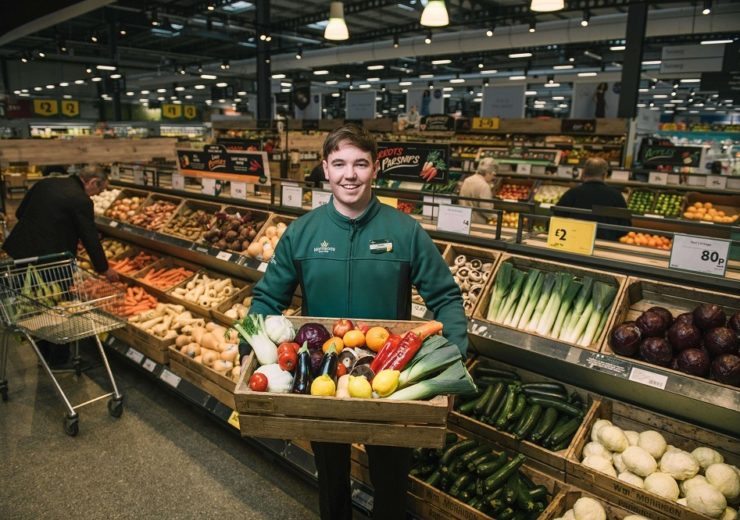 Morrisons will become the first supermarket in the UK to offer plastic-free fruit and veg areas in its stores.

It follows a ten-month trial in three of its shops in the Yorkshire towns of Skipton and Guiseley, and in St Ives, Cornwall.

Across the stores, the amount of loose fruit and veg sold rose by an average of 40%.

Morrisons’ fruit and veg director Drew Kirk said: “Many of our customers would like the option of buying their fruit and veg loose.

“So we’re creating an area of our greengrocery with no plastic where they can pick as much or as little as they like.

“We’re going back to using traditional greengrocery and we hope customers appreciate the choice.”

How plastic-free fruit and veg will work in Morrisons

Customers will be able to choose from 127 varieties of fruit and veg – and either buy them loose or put them in recyclable paper bags.

The new “buy bagless” shelves are expected to result in the saving of an estimated three tonnes of plastic a week, equating to 156 tonnes a year.

Morrisons will roll out the scheme across 60 stores over the course of 2019, and then continue into the future as part of the supermarket’s ongoing refurbishment programme nationwide.

The expansion of the range will mean that customers will be able to buy loose cauliflower, white cabbage and chestnut mushrooms.

Morrisons has already made commitments that will remove 9,000 tonnes of unnecessary or problematic plastic each year.

This figure includes the removal of 600 tonnes of unrecyclable polystyrene from branded food and drink products.

It also estimates that it will remove 1,300 tonnes of plastic in use as a result of the launch of paper carrier bags earlier this month.

Fiona Nicholls, ocean plastics campaigner for environmental charity Greenpeace UK, said the move is a good one, but more can be done.

She told Compelo: “Morrisons is showing initiative by being the first major UK supermarket with a ‘buy bagless’ fruit and veg section.

“Next, we’d like to see this rolled out across all its 491 stores.

“Morrisons also makes clear that some produce lines, such as potatoes and apple, will still be packaged in unnecessary plastic – so there’s still room for improvement.

“Greenpeace is calling for all UK supermarkets to eliminate unnecessary and unrecyclable packaging by 2020.”

In March 2019, the charity ranked Morrisons as the third best supermarket in Britain when it came to how much plastic was reduced in its stores, bringing down the amount of plastic waste produced by 3,766 tonnes from the start of 2018.