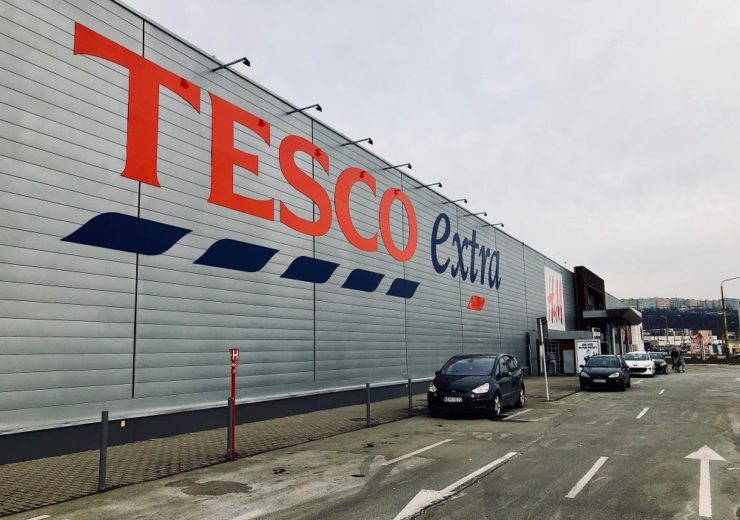 The trial will take place in two Tesco Extra stores in Watford and Swindon (Wikimedia/RickRichards/https://commons.wikimedia.org/wiki/File:Tesco_Extra_Ko%C5%A1ice_1.jpg)

Tesco has today begun a trial testing the use of plastic-free packaging for some of its fruit and vegetables in an effort to reduce the amount it uses.

The pilot involves two of its larger Tesco Extra stores in Watford and Swindon, and will run over the course of a month.

The material will be removed from 45 food items, including apples, onions, mushrooms, peppers and avocados.

“We’ll be keeping a close eye on the results, including any impact on food waste.

“Whatever happens, we’re going to keep reducing the amount of packaging we use and ensure everything on our shelves is fully recyclable.”

Why Tesco wants to go plastic-free

The trial comes after a report was released in November last year by UK non-governmental research organisation the Environmental Investigation Agency and charity Greenpeace UK.

The Checking Out on Plastics study said that Britain’s top 10 supermarkets were using 810,000 tonnes of single-use plastic every year.

This included over 1.1 billion single-use bags, 958 million “bags for life” and 1.2 billion plastic bags for fruit and vegetables.

Tesco is the second major British supermarket chain to trial plastic-free fruit and vegetables, with Marks & Spencer setting up a similar scheme at its Tolworth, London, store in January this year.

Tesco announced last year that any hard-to-recycle plastic will be banned by the end of 2019, with all its packaging being made fully recyclable by 2025.

IKEA to avoid plastic in consumer packaging by 2028

IKEA to avoid plastic in consumer packaging by 2028