Using proteins to create its bio-based plastics, developers Xampla will use the material in personal care products as a microplastic alternative 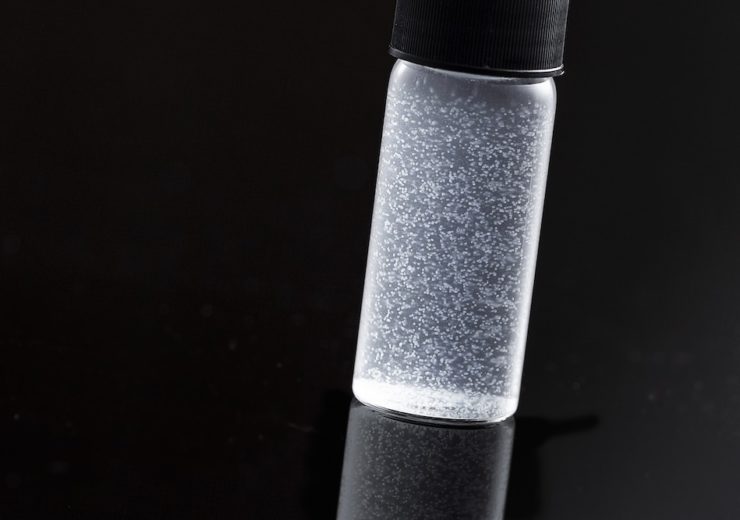 Xampla is looking to launch its microplastic alternative product in September and is currently in the final stages of scaling-up production (Credit: Xampla)

The University of Cambridge spin-out is seeking to reduce microplastic pollution by developing the “world’s first” plant protein-based plastic products.

Most bio-based plastics currently use polysaccharides — such as algae or starch — which require chemical cross-linking to improve their performance.

Speaking to NS Packaging, Xampla CEO Simon Hombersley explains: “The first generation of bio-based materials that are on the market now, whether it’s for microplastic or packaging applications, are good, but compromised.

“And the compromise they have to make is they require synthetic chemical additions to deliver decent performance.

“What Xampla has developed is the next generation of bio-based material, because, from a scientific point of view, proteins perform better than polysaccharides.

“And the breakthrough that the team has made is in how to make useful practical materials from cheap, widely available, scalable plant proteins.”

What will the £2m funding allow the company to do?

The funding round for the start-up was co-led by global technology investor Amadeus Capital Partners and Cambridge Enterprise.

The funding will enable the start-up to develop its prototype material into products, with the initial target being the $12bn microencapsulation market — commonly used in personal and homecare products.

“Consumers often aren’t aware of these ‘hidden plastics’ and have little ability to reduce their use of them so a new sustainable materials approach is needed.”

How does Xampla develop its bio-based protein plastics?

The new material stems from the work done by protein experts Professor Tuomas Knowles and Dr Marc Rodriguez Garcia, who were inspired by the way spiders make silk.

Hombersley adds: “They realised they couldn’t actually synthesise the silk because it was not cost-competitive.

“But they could learn from how a spider made silk and uses other proteins, namely plant proteins, to make materials in a similar sort of way.”

They are now using proteins to build natural alternatives to fossil-fuel plastics.

Traditionally, bio-based plastic alternatives are made from polysaccharides such as algae and starch.

Hombersley explains: “The reason for that is purely scientific and it’s because those are easy to work with and turn into other materials.

“But because of the natural performance characteristics of polysaccharides, they lack strength.

“In order to get useful materials from them, what the first generation of bio-based material manufacturers have to do is add a synthetic addition or do some chemical cross-linking.”

These chemical additions impact the biodegradable capabilities of the material, which, in turn, leads to complex end-of-life situations and industrial composting.

“However they’re very hard to work with, and that’s what the scientific breakthrough is here.

“A professor in Cambridge has worked out how to engineer plant proteins into useful new structures, and that’s a first, no one else is doing it in the world.”

Due to the lack of additional chemicals making up the structure, the plastics Xampla are putting forward are fully digestible.

This means if they end up in the water stream or on agricultural land, they will simply be digested by bacteria.

How will the bio-based protein plastics work in personal care products?

For the moment, Xampla’s protein plastic products will be used for the microencapsulation of various ingredients in personal care products.

Microencapsulation is a process in which tiny particles or droplets are surrounded by a coating to give small capsules many useful properties.

In the personal care marketplace, these are typically found in washing powder or liquid.

They are designed to cling onto the fabric on clothes once they come out of the washing machine and are dried.

These will then release a fragrance during the day while someone wears the clothes.

Hombersley adds: “Those melamine-formaldehyde capsules are being banned by the EU, so that’s why we’re focusing on that as our launch area.

“We want to work with industry to give them a solution to that regulatory ban.”

Xampla is looking to launch its product in September and is currently in the final stages of scaling-up production.