What is the EU-backed PlastiCircle recycling project aiming to boost the circular economy? 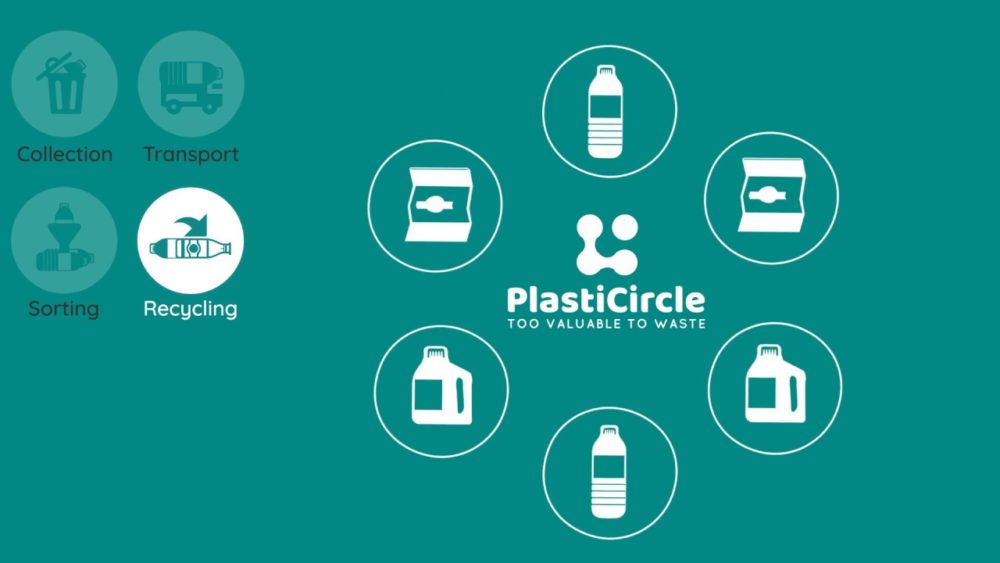 The PlastiCircle scheme is backed by Horizon 2020, the EU’s biggest-ever research and innovation programme (Credit: PlastiCircle)

The PlastiCircle project is aiming to reinvent the way plastic packaging is treated in support of a circular economy.

The scheme is backed by Horizon 2020, the EU’s biggest-ever research and innovation programme, to help roll out new developments in waste collection, transport, sorting and recycling.

PlastiCircle was formed by 20 European industry organisations, led by the Packaging and Logistics Research and Innovation Center (ITENE), with the goal of transforming plastic packaging waste into valuable products.

Innovations being worked on range from the development of smart containers for separating waste collections to the improvement of transport routes and sorting technologies.

To help get the project working in communities, it is being piloted in three European cities – Valencia in Spain, Utrecht in the Netherlands, and Alba Iulia in Romania.

How PlastiCircle is supporting the EU’s recycling targets

Currently, EU member states produce more than 25 million tonnes of plastic annually, of which about 30% is being recycled, with 40% incinerated and 31% sent to landfill.

A key component of the PlastiCircle consortium is that it will contribute to the bloc’s waste management and recycling targets until 2030.

How PlastiCircle is supporting the circular economy drive

To support a shift towards a circular economy, where items are used as many times as possible throughout their lifetime, the PlastiCircle project involves four key steps.

The first step is a collection system that identifies the quantity and quality of packaging deposited into smart containers — helping to implement a system of incentives for the public.

This is to encourage better separation of plastic waste and reduce the amount of mixed waste generated.

The second action focuses on transport and cutting the final price of recovered plastic by saving fuel and transport costs on trips from towns and cities to sorting plants.

Sensors will indicate how full waste containers are, updating truck routes in real-time, while a waste compactor installed on-board maximises the load transported on each journey.

The next step is enhancing sorting technologies to achieve a better separation of different plastics in treatment plants, including multilayer and multi-material packaging.

The final method involves the reprocessing of materials into products such as automotive parts, foam boards for wind turbines, roofing structures, rubbish bags, asphalt, fences, and benches — helping to ensure items remain in a closed-loop model.

The first pilot took place between May and September 2019 in Valencia, which is Spain’s third-largest city and sits on the south-eastern coast.

It was rolled out in the district of San Marcelino, with 1,462 residents registering to take part in the project – making up 554 families.

There were 25 specially adapted yellow containers installed in the area for locals to deposit their rubbish bags.

Each container was equipped with a smart device, which was designed to issue a label with a bar code that identified the user.

The label would then be stuck onto the bags of rubbish, before being put into the container.

The codes allowed recyclers to gauge how well the participants had sorted their waste, rewarding them accordingly with ‘ecopoints’ that could later be exchanged for a range of rewards.

During the pilot, PlastiCircle revealed that an extra node had to be installed to the containers so that the information from the filling sensors inside them could be received.

This information was used to improve the waste logistics, by helping to optimise the routes of the collection trucks.

The consortium claims this method allowed vehicles to save 41% of the distance they travelled, while the time of the collection operations was reduced by 32% and a 22% reduction in fuel consumption was achieved.

It revealed the amount of PET plastic recycled during the campaign could be used to produce 102,000 T-shirts and there was a reduction of 5,000kg of CO2 emissions.

The second pilot runs from December 2019 to August 2020 in Utrecht – the fourth-largest city and municipality in the Netherlands.

It is being conducted in partnership with the local authorities’ waste management projects and is operating in the western region of the city.

It has used door-to-door collections of mini containers from about 2,000 households, with 43 underground smart containers also linked to the pilot.

The first phase of action was about raising awareness, while the second focused on reducing the amount of plastic waste.

PlastiCircle has revealed that during the pilot, key data and information about underground containers and capacity sensors in driving routes has been shared.

The data is now being used to develop software that helps forecast and optimise collection routes.

Utrecht is also trialling a tool that instructs drivers to operate more safely and efficiently while using less fuel to reduce CO2.

The third pilot is based in Romanian city, Alba Iulia, in the historic region of Transylvania.

It is taking place in the Goldis district, between February and July 2020 and will be used to implement some of the findings from Valencia and Utrecht.

But with the pilot taking place in a different part of the EU, PlastiCircle is expecting to experience fresh challenges in Alba Iulia from what it has seen previously, where conditions on the ground may differ significantly.

Local authorities and residents will be involved with innovations in packaging collection and waste transport, with the use of an IoT cloud platform.

Residents will experience first-hand how optical sorting technologies operate and be educated on effective recycling methods – helping deliver value to the production of items made from recycled polymers.