Meal kits could have less of an environmental impact – despite their higher use of packaging, says new study

According to a new study, meal kits produced a third fewer green house emissions compared to store-bought food, despite having more packaging 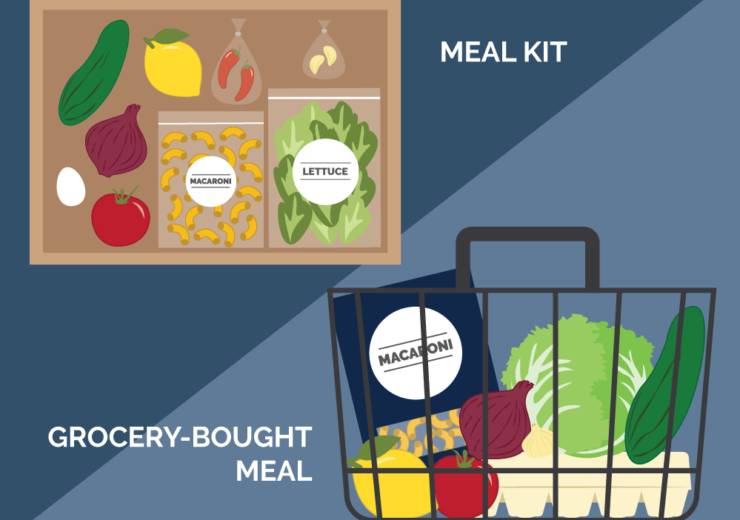 Meal kits have a lower overall carbon footprint than those purchased at the supermarket – despite using more packaging, according to new research.

A study by the School for the Environment and Sustainability at the University of Michigan, found that on average, the greenhouse gases emitted were a third lower from meal kits compared to food bought in stores.

“It’s food waste and transportation logistics that cause the most important differences in the environmental impacts of these two delivery mechanisms.”

How did the team conduct the meal kits packaging study?

The researchers at the University of Michigan looked at greenhouse gas emissions during every step of the food process, beginning at the farm and ending when waste enters landfill.

They looked at five, two-person meals – salmon, cheeseburger, chicken, pasta and salad – for both both meal kits from industry giant Blue Apron and supermarket meals.

Meals sold at supermarkets had a higher median of emissions produced for four of the five meal types – salmon, chicken, pasta and salad.

The amount of household food waste from supermarket meals exceeded those for meal kits for all five meals, with the difference attributed to pre-portioned ingredients in meal kits.

Meal kits do contain more packaging than supermarket food – but due to pre-portioning, there’s less food per meal that’s used.

Professor Miller explained this is because the environmental impact of food waste outweighs the packaging in meal kits.

She said: “We took a close look at the trade-off between increased packaging and decreased food waste with meal kits, and our results are likely to be a surprise to many, since meal kits tend to get a bad environmental rap due to their packaging.

“Even though it may seem like that pile of cardboard generated from a Blue Apron or HelloFresh subscription is incredibly bad for the environment, that extra chicken breast bought from the grocery store that gets freezer-burned and finally gets thrown out is much worse.

“This is because of all the energy and materials that had to go into producing that chicken breast in the first place.”

Due to not being sold at supermarkets and using a direct-to-consumer model, meal kits avoid food waste that commonly occur at major retail outlets.

This business model also saves in what’s called last-mile transportation – the final leg of the journey, when the food ends up at a consumer’s home.

According to the report, last-mile emissions accounted for 11% of the average supermarket emissions, compared to 4% for meal kit dinners.

Brent Heard, a University of Michigan doctoral student who authored the study, said: “The way consumers purchase and receive food is undergoing substantial transformation, and meal kits are likely to be part of it in some way.

“In order to minimise overall impacts of the food system, there’s a need to continue to reduce food loss and waste, while also creating advances in transportation logistics and packaging to reduce last-mile emissions and material use.”

Meals with the largest environmental impact either contained red meat or were associated with large amounts of wasted food.