PRO Europe’s chief on simplifying the recycling process for consumers

Speaking at the SPC's Engage conference, the managing director of PRO Europe Ursula Denison also spoke about the need to bring technology into waste sorting 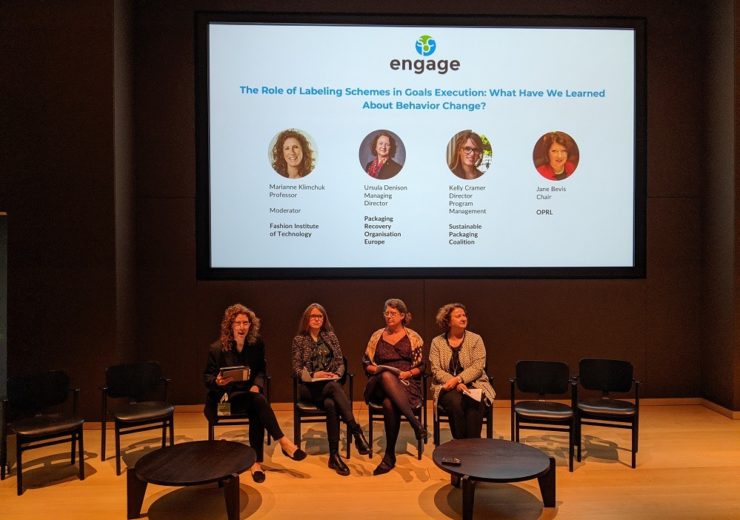 Ursula Denison (furthest right in the picture), has been working on the Green Dot since its beginning in the early 1990s

As European countries strive to meet tough recycling goals, it’s becoming clear that multiple methods of recycling are confusing consumers and making it less likely for schemes to succeed. Ursula Denison, MD of Packaging Recovery Organisation Europe, believes the only route to success is making recycling convenient for all households. Here she discusses how this could be achieved.

Since its launch in 1995, the Packaging Recovery Organisation (PRO) Europe has been one of the world’s leading campaigners for the sensible management of waste.

In its primary role, PRO Europe is the general licensor of the Green Dot trademark for Europe, working as the umbrella organisation for European packaging and packaging waste recovery and recycling schemes which typically use the registered trademark.

The Green Dot first came into existence when industry-led recovery organisation Der Grüne Punkt developed it in Germany in 1990.

Der Grüne Punkt was founded by industrial firms and retailers in order to fulfil take-back and recovery obligations set out by the German Packaging Ordinance, which forced businesses to pay for the recovery of their waste.

The recovery company was one of the founding members of the both the continent-wide European Grüner Punkt and PRO Europe organisations.

One misconception some have found surrounding the Green Dot as a symbol, including PRO Europe’s managing director Ursula Denison, is the public perception that its presence means a product can be recycled.

Speaking at the Sustainable Packaging Coalition’s (SPC) Engage conference earlier this month, Denison said: “The Green Dot is not a recycling symbol, that’s the biggest misperception.

“It is a financial symbol and shows that the company with the Green Dot on their packaging is financially contributing to a system for the collection, sorting and recovery of packaging, that’s the story behind the Green Dot.

“It’s been used in 28 countries in Europe, it the most used trademark probably in the world and goes on all kinds of packaging.”

In order to improve recycling, it must be made convenient for the consumer, says PRO Europe MD

Whether it be kerbside collection, deposit return schemes, bottle banks or recycling centres, there’s a wide range of ways to dispose of waste.

Alongside the array of collection methods, the way consumers use these services also varies from place to place.

These differences can range from having to separate the recyclables and sort them into different bins, putting all recyclables into one bin, using household facilities to recycle some items and using facilities such as bottle banks to recycle other products.

Denison believes, in order to improve recycling rates, industry needs to make the process as convenient as possible for the consumer.

She said: “Our experience in Germany has been that you have to make it convenient to the consumer, even Germans who like to put round things in round holes and square things in square holes, they are not that dedicated.

“In Germany, an average of 28 kilogrammes of household collection of items, such as lightweight packaging, plastics and metals, are recycled a year per consumer.

“Now if we make them bring it to a container park, we go down to five kilogrammes a year per consumer.

“Even in a country like Germany, which has sorting and recycling gene, convenience is the key.

“What we need to do in the next couple of years, in view of the targets we are obliged to meet as industry, would be to open the bins to all packaging and make recycling convenient for households.”

Over the past few years, the world of business and academia have been investigating how technology could be used to improve recycling rates.

In August, interns at tech firm IBM partnered with Marwell Zoo to develop an app which uses AI to show users where to put their waste.

The same month also saw Yale announce it was to test the use of robotics to improve waste management in the recycling industry.

The four-year project at the US-based Ivy League university, which received a $2.5m grant from the US National Science Foundation, will look at how robots could work alongside humans in the sector.

Denison believes the sorting of waste should be the main focus of technological development.

She said: “We should look at the technological solutions that we have these days for sorting packaging, there’s lots of potential out there.

“The challenge for consumers is to get them to commit to sort their packaging but not overload the agenda.

“I think it’s important to communicate the benefits of recycling, the credibility of recycling, that if you sort out your packaging, it’s not going to end up in the landfill, it’s actually going to the recycling.

“We also need to have transparency and credibility, there we’ll find the technological solutions to solve the challenges of sorting and recycling of packaging.”