Chain to roll out biodegradable burrito packaging starting this April & donates portion of sales from all plant-based menu items, including its Beyond Meat® burrito, to David Suzuki Foundation 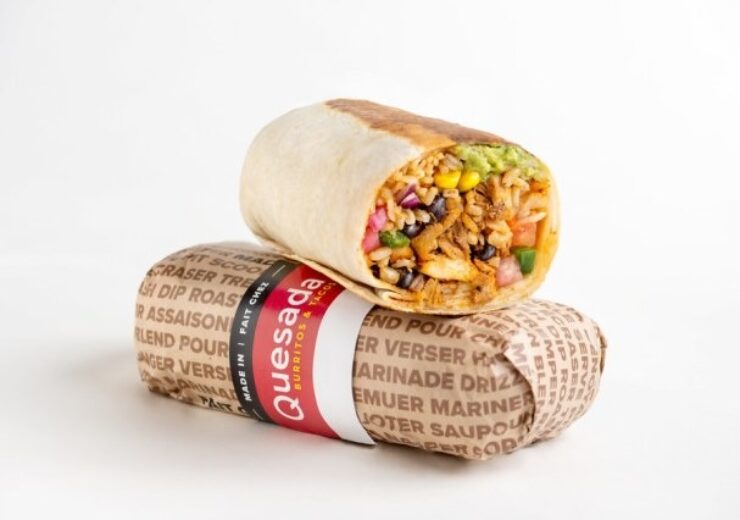 Quesada Burritos & Tacos announces it will become Canada’s first Mexican chain to stop giving burritos a bad wrap by phasing out foil to package its burritos in favour of biodegradable paper, starting this April. This translates to diverting about 100,000 pounds of aluminum or 12.5M foil wraps from landfills over the next 5 years.

Traditionally, burritos everywhere are wrapped in aluminum foil packaging. However, aluminum takes about 400 years to break down. Furthermore, one ton of it takes about 170 million BTUs to produce— or approximately 1,400 gallons of gasoline—and emits about 12 tons of greenhouse gases.

“We’re working hard to be more sustainable while also hopefully influencing and empowering our community of fans and loyal customers to do the same,” said Steve Gill, Founder & CEO, Quesada Burritos & Tacos.

While Quesada already donates 1 percent of the sales of its delicious Beyond Meat® burrito to support the David Suzuki Foundation through its commitment to 1% for the Planet, it’s topping up donations this month until Apr. 30 by expanding charitable menu items to include all of its plant-based menu items, like its popular Roasted Veggie Burrito.

“Canadians care about protecting the environment, but per capita, research shows we are among the most wasteful nations in the world,” said David Suzuki Foundation director of development and strategic partnerships Siobhan Aspinall. “The good news is when companies make changes toward more sustainable ways of business, it encourages consumers to think about how their purchasing decisions affect our planet.”

Quesada was recognized as one of Canada’s top 400 growing companies in 2020 by the Globe & Mail. Quesada is an award-winning Canadian restaurant chain offering fresh, delicious Mexican-inspired, made-from-scratch salsas, sauces and mouth-watering burritos, tacos and salad recipes prepared with authentic flavours and spices.

Founded by Steve Gill and his brother Greg in 2004, Quesada was among the first restaurant chains in Canada to spark the burrito trend along with a fresher, healthier, whole food experience. There are more than 140 Quesada restaurants and growing across Canada in Ontario, Alberta, British Columbia, Manitoba, New Brunswick, Quebec and Saskatchewan.