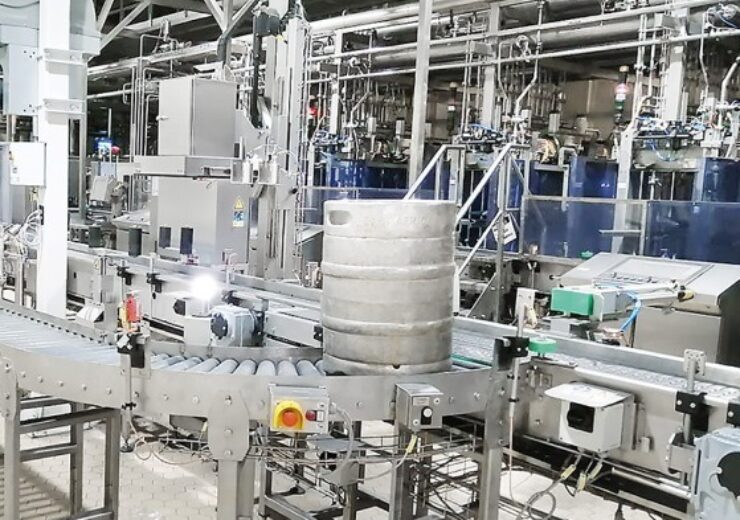 The new KHS kegging line in Kisumu at a glance: the system can rack up to 400 kegs an hour. (Credit: KHS Group)

East African Breweries Limited is about two years away from making a century since it was established in 1922, this marked by the delivery of a case of its first beer to The Stanley Hotel in Nairobi in December of the same year. Its subsidiaries in Kenya, Tanzania and Uganda normally do brisk business, brewing and distributing products for markets in more than ten countries in Africa and beyond.

Kenya Breweries generates the largest share of EABL’s sales – close to 70% in the last financial year – and its market is the largest. The group has been part of the British multinational Diageo, the world’s largest producer of spirits, since 2000.

The cooperation between KHS and Kenya Breweries also enjoys a long tradition: the brewery has been working with the Dortmund systems supplier and its predecessor companies for about 45 years now. Many KHS lines and machines have been in operation – and indeed still are – at production sites in Ruaraka near Nairobi and Kisumu in the west of the country.

In both 2005 and 2010 EABL procured a KHS kegging system that includes palletizing and depalletizing – the first with a capacity of up to 400 and the second for 480 50-liter kegs per hour. In 2016 the second line was given a general overhaul and its output expanded to 800 kegs an hour. The most recent acquisition from KHS is a new line comprising five Innokeg Transomats, an exterior keg washer and a pallet stacker and destacker that was commissioned at the end of 2018 in Kisumu. At this site, which lay dormant for a number of years, a completely new plant has now been built to highly innovative standards for the equivalent of about €150 million.

“KHS designs the best keg systems and sets standards with its innovations,” explains Jacob Bett, site manager in Kisumu. “Where safety and hygiene, consistency and energy efficiency and media consumption are concerned, KHS technology gets the best results.” This means that the machines satisfy the high ecological and economic benchmarks that EABL also sets itself. After all, every single drop of water counts in Africa, Bett says, adding that EABL is one of Africa’s pioneers when it comes to sustainability. He’s therefore proud of the fact that all brewing and filling processes have now been optimized to cut the quantity of water used per liter of beer from three-and-a-half to three liters. The company is also taking a number of actions to reduce its carbon footprint – from a photovoltaic system that generates energy to a water recovery and treatment plant that keeps about 900 cubic meters of water a day in circulation.

At EABL sustainability is chiefly understood to mean the company’s responsibility towards society. The entire value chain from farmer to consumer is regarded and promoted under the motto of “from grain to glass”. The African brewery campaigns for stable tax and regulatory conditions and is in constant dialogue with the Kenyan government. Ultimately, it’s also greatly committed to people acting responsibly in their consumption of alcohol. This includes programs being devised to encourage people to drink in measure on the one hand and actively combating the illegal distillation of spirits and alcoholism on the other.

The Kenyan government has found that combating illicit alcohol, which often results in health issues for its consumers, remains an uphill struggle. In the 1990s it attempted to improve the situation by drastically raising taxes. The price for legal alcoholic beverages rose so sharply that sales figures dropped from 400 million to 240 million liters between 1991 and 2001. There was no decrease in the amount of alcohol consumed, however. On the contrary: during the same period the black market for privately brewed beer and illegal ‘moonshine’ boomed, especially in deprived areas. This is where, for instance, ‘hooch known as chang’aa has been made of fermented sugar cane, millet and maize for many generations. In the non-industrial processes used to do so, the alcohol content can’t be monitored; this is frequently enhanced by chemicals such as methanol or jet fuel being added to the mixture. Consumption of the dubious brew can cause blindness – or even be lethal; every year, about 500 Kenyans die from drinking alcohol produced illegally.

In 2003 irregular products accounted for a staggering 56% of all alcohol imbibed in Kenya. A year later EABL launched its distinctive Senator Keg to market, a beer that everyone could afford specially developed to cater for the previously neglected target group of low-earners. A 300-milliliter glass of Senator now costs just a fraction – about a fifth of the price of EABL’s flagship Tusker beer. The beverage is distributed according to the consumption habits of the country’s poorest, namely from tens of thousands of small bars dotted along the roadside and in the most remote of villages. By instigating various qualification measures, the brewery ensures that customers are served a high-quality beverage under hygienic conditions. It’s also helping to have more and more of the old twilight operations replaced by licensed, exclusive Senator Key salespoints. This low-price product has been made possible by the brewery exploring several new avenues:

Firstly, it decided to make a beer without hops as these are difficult to come by and thus relatively expensive. Sorghum grain is primarily used in Senator without the quality being compromised. Today, 80% of the raw ingredients are procured from 62,000 local farmers whom EABL has contracted for this purpose.

Secondly, packaging costs have been cut down to a minimum by the beer not being filled into glass bottles but only into 50-liter kegs – on KHS machinery. A hand pump had to be developed for this purpose to avoid costly tapping equipment having to be used. Less carbon dioxide was also added to the beer so that it can be drawn from the barrel when warm without too much foaming. This in turn allows it to be served without cost- and energy-intensive cooling systems coming into play.

Thirdly and finally, the brewery petitioned the Kenyan government to reduce taxes on Senator Keg in the hope that the lower price would lure cash-strapped drinkers away from illicit liquor. The authorities actually accepted this line of argument and granted concessions on the payment of excise duty, initially of 100% (80% today).

On the market for close to 17 years now, Senator Keg has become one of Kenya’s biggest beer brands, even if growth – not least due to the changing political framework and renewed taxation – hasn’t been as rapid as in the first few years of sales. Notwithstanding, the brand’s story of success is seen worldwide as a prime example of good marketing in accord with social responsibility.

The new factory in Kisumu is largely instrumental in providing the necessary capacity for this successful product. All told, 1,600 50-liter kegs or 800 hectoliters per hour can now be racked on the three kegging systems installed at Kenya Breweries. Thanks to the new kegging facility, the output of Senator Keg rose by 32% in 2019 compared to the previous year.

Jacob Bett emphasizes how pleased he and his colleagues are with their plant engineering from KHS. “With its exceptional performance KHS’ ultramodern filling line is giving us record OEE levels of up to 100%. This naturally has a very positive impact on our capacity. With figures like these the system will definitely pay off in a very short time indeed. Anyone would happily invest in a line that enables such good performance.” Bett also finds the partnership between the two companies wholly positive. “KHS is itself a very dynamic company and was thus able to easily adapt to our way of working,” he praises. “So that we can also meet our targets under great time pressure, we had need of highly efficient teams who work quickly. Thanks to the open and straightforward culture of communication, we’ve achieved the various milestones in our joint venture with practically no effort whatsoever.”

n order that production also runs smoothly in the long term, EABL makes use of KHS’ local services in Kenya. An SLA1 has been concluded with a term of eight years, under which KHS is to maintain line performance at the highest level in close cooperation with the customer. Part of the contract governs various service packages for maintenance, overhauls, spare parts, training and continuous monitoring. An embedded engineer initially assisted in the transfer of knowledge to the machine operators, thus making certain that the recommended, tried-and-tested processes involved in the running of the machinery are adhered to. Monthly technical visits to the factory and scheduled overhauls ensure maintenance of the systems according to specifications.

What’s more, regular weekly meetings with the SLA manager are held and both parties are in continuous dialog. More SLAs – especially valued by Diageo – are currently being drawn up for other sites in Africa in an expression of its close, long-term business relationship with KHS.

“KHS’ local service engineers have proved to be a real boon,” says Jacob Bett. “They can quickly eliminate any problems that arise during production and carry out preventive maintenance measures on their routine visits. However, what’s most important to us is that they continue to train our operators and engineers during on-the-job courses.” All of this, Bett concludes, significantly contributes to the high overall efficiency of the line.

The largest spirits producer in the world Diageo was formed in 1997 when Guinness merged with Grand Metropolitan. The British multinational employs 28,400 people and in 2019 yielded a turnover of approximately €12.87 billion with over 200 brands, among them Guinness, Kilkenny, Johnny Walker, Smirnoff, Gordon’s and Tanqueray. Even if its regional focus is North America, Diageo generates 12.4% of its business in Africa. A close partnership between Diageo and KHS has since evolved on this particular growth market. It thus follows that in 2018 KHS dedicated a key account manager to Diageo Africa. This executive coordinates activities at KHS’ different regional centers with an eye to the beverage group’s activities on the subcontinent. Performance-based SLAs give Diageo the best possible service and ensure that its machinery produces within a defined budget at a consistently high level of performance in the long term. Besides the key line in Kisumu and other projects in South Africa, for example, the following larger systems have been installed for the group over the last 20 years:

Douala, Cameroon: Returnable glass line (up to 36,000 bottles per hour)

Sebeta, Ethiopia: Returnable glass line (up to 36,000 bottles per hour)