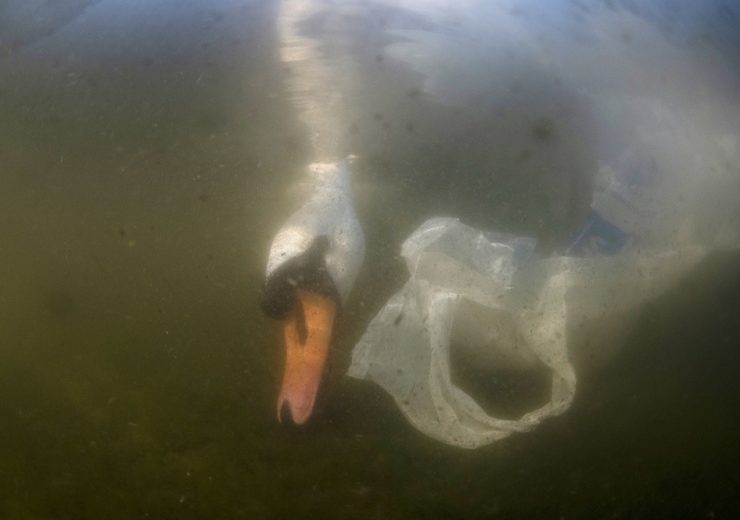 A mute swan is photographed next to a plastic bag in the river Trent. (Credit: Greenpeace)

The UK’s River Mersey contains more plastic pollution than the Great Pacific Garbage Patch, an area widely regarded as one of the most plastic-polluted waters in the world.

This is according to a new report from environmental charity Greenpeace UK, titled Upstream: Microplastics in UK rivers.

The study includes data from water samples, found by scientists and campaigners from the organisation between February and March, which were analysed at the University of Exeter.

Wildlife expert and TV presenter Steve Backshall, who will be speaking at the study’s launch in the UK’s parliament later today, said: “I’ve seen the impact that plastic pollution has on wildlife first-hand, and it’s crushing to see birds feeding plastic to their young and using it to build their nests.

“Greenpeace’s study has discovered that the River Mersey is even more polluted than the Great Pacific Garbage Patch – surely this will galvanise us all into doing something about this.

“Plastic pollution isn’t just a domestic issue, its impacts are seen on wildlife and humans all over the world.

“For the sake of nature and for the sake of future generations we need to stop producing so much of it – it’s the only way forward.”

One issue the study found was that all of the 13 rivers in UK that were tested contained microplastics.

These are microscopic plastic particles that are less than 5mm in diameter and often fragments of larger degraded items, such as plastic bottles, packaging and bags.

The investigation of rivers found a total of 1,271 pieces of plastic, ranging in size from straws to bottle-top fragments.

Out of the 13 rivers, five contained microbeads, an item which was partially banned in 2017.

Alongside this, more than half the rivers tested contained plastic pellets called “nurdles”, which are used as a raw material in the production of plastic products.

Dr David Santillo, senior scientist with the Greenpeace Research Laboratories at the University of Exeter, said: “The results of this report speak for themselves.

“Every single river we tested contained microplastics, and given what is known already about the effects of plastics on marine wildlife, it is reasonable to assume that the plastic pollution of our rivers poses some level of threat to river wildlife.

“There is an urgent need for research to better understand those threats, as well as the risks to human health.

“Once microplastics are in the river, they become impossible to remove again, so we have to solve the problem at the source.

“We ignore this problem at our peril.”

Greenpeace is calling on the UK government to set legally-binding plastic reduction targets in the upcoming Environment Bill and to create an independent environmental watchdog with proper powers to enforce those targets.

The charity says 90 members of parliament have already pledged support for the amendment.

Fiona Nicholls ocean plastics campaigner for Greenpeace UK, said: “It’s been almost two years since Blue Planet 2 – and yet plastic use is still set to skyrocket.

“This study is a wake-up call for the government.

“Fiddling around the edges of the plastic pollution problem by banning straws simply doesn’t cut it.

“We need to see bold new plastic reduction targets in the upcoming Environment Bill, and aim to at least halve single use plastic production by 2025.”