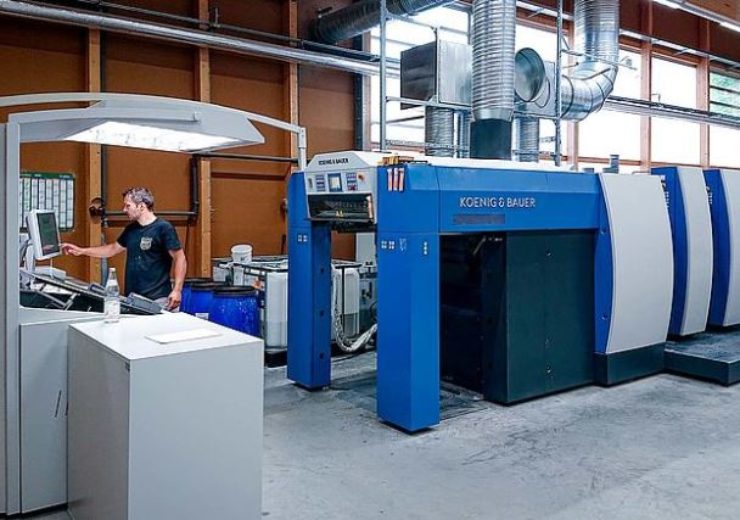 The five-colour Rapida 76 with coater and extended delivery is highly valued at Schmidt & Buchta for its outstanding performance potential. (Credit: Koenig & Bauer AG)

Matthias Herrmann, managing director of the Schmidt & Buchta printing company based in the small town of Helmbrechts in northern Bavaria, paid a visit to Koenig & Bauer Grafitec in July last year to learn more about the Czech factory in which his Rapida 76 was manufactured. This highly automated five-colour press with coater and extended delivery has now been used for routine production for more than six months.

Schmidt & Buchta has seen any number of changes since the arrival of its Rapida 76. Investment in a new hall has tripled the available production floor space from 500 to 1,500m2. And the Rapida 76 has far exceeded Matthias Herrmann’s original expectations: “I never imagined that the press would have such an impact. It has immense potential.” Makeready times have been reduced tangibly, and the company is now printing an average of two to three additional jobs every day.

Jobs which previously required printing time of between 36 and 42 hours are now completed, along with all the requisite plate changes and makeready processes, within 21 to 24 hours. The consistently high production speed represents another contributing factor. While a print job used to last for 1.5 shifts, Schmidt & Buchta has now been able to condense its operations to one single shift only. Even so, monthly output has increased by around 500,000 sheets – despite the fact the predecessor press was also from the 16,000sph generation.

“On the old press,” Herrmann recalls, “we sometimes had to drive with the handbrake on, so to speak, in order to keep the quality up to the required level.” This is now a thing of the past. The Rapida 76 reliably delivers consistent results, irrespective of production speed or substrate. QualiTronic PDF, in particular, can take the credit for this. The system comprises not only inline colour control and sheet inspection with continuous production monitoring, but also a comparison of the printed sheets with the pre-press PDF. This functionality allows the company to promise a consistently high quality, as required by pharmaceuticals companies, for example.

Matthias Herrmann is still as fascinated by the automatic regulation of colour densities shown on the console monitor as the press starts up as he was on the very first day. He has calculated that the automatic control has enabled waste to be reduced by up to 50 per cent. The benefits are particularly apparent when restarting the press following stoppages or when running work-and-turn jobs.

The print quality on uncoated papers is likewise much better than anything the previous press produced – even without an LED-UV process. “We were already getting very good results beforehand, but the Rapida has elevated us to an even higher quality,” says Matthias Herrmann. Dot sharpness on the Rapida 76 is simply superior.

The sidelay-free infeed is another feature that Matthias Herrmann considers ingenious. Printing on thin and sensitive substrates is much more straightforward, as DriveTronic SIS does not subject the sheets to mechanical stress during alignment. This dispels any concerns about buckling or marking by the side lay. In addition, there is no need for manual adjustments when changing substrates. Even a switch from 80 to 300g/m2 is an amazingly straightforward process.

The coater is another feature which has made a similarly good impression on everyone at Schmidt & Buchta. Coating plates are changed in two to three minutes. In the past, a change usually took around ten minutes longer. Furthermore, changing the coating type necessitated manual washing of the unit, which took a further 15 minutes. The effective cleaning time for the Rapida 76 is negligible, as it is conducted at the same time as other makeready processes in automatic mode. Where the work requires frequent coating changes, the time savings are, of course, considerable.

Nor is anyone prepared to forego parallel washing processes in the printing units any more. Matthias Herrmann: “We had no idea that so many tasks could actually run simultaneously.”

The printers at Schmidt & Buchta were working alone on the new Rapida 76 after just two weeks of familiarisation training. It is now making a significant contribution to the continued growth of the 13-man company. Matthias Herrmann considers the press to be on an absolute par with its 3b counterparts, the only difference being that it prints in a smaller format.

Even if Schmidt & Buchta were also affected by the usual order volume failing to materialise in March and April due to COVID-19, Matthias Herrmann is nevertheless optimistic about the future. By combining commercial work for the regional economy, the cultural sector, food and pharmaceuticals companies and furniture manufacturers, not to mention its unique specialisation in so-called “sample hangers” for the textile industry, he is well equipped to cope with any shifts in market demands. In fact, turnover at Schmidt & Buchta actually increased by two to three per cent in the first three months of 2020, despite the lockdown and all the negative consequences it had for the advertising industry.