11 July 2018, Noida (India): Impressed by the wide range of polymeric films that Flex Films manufactures and the associated R&D capabilities that the company is globally recognized for, Indian Space Research Organization (ISRO) had approached the company earlier in September 2017 with a requirement of specialized film for passive thermal control of spacecraft components.

Taking this requirement in its stride, the engineers at Flex Films India developed a solution for ISRO in a record time period of 6 months. 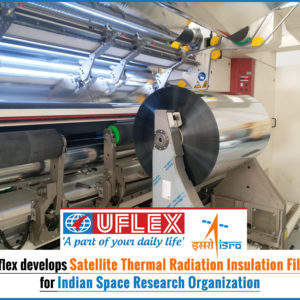 Talking more about this specialized film, Mr. Anand Prakash Gupta from Speciality Films and R&D Department at Flex Films, Noida says, “ISRO approached us in an endeavour to achieve its vision to self-reliance in Indian Space Programme which aims at engaging more Indian Industries in producing Space worthy products/technologies for its specific applications. Their desired specifications were in electro-optical and physical terms like Solar Transmittance, IR Emittance, Thickness of Coating in nano-meters on both sides of the substrate and wide spectrum working temperature of -150 to +120 degrees Celsius to name a few. The real challenge was to convert these specifications into our measurable norm. For this we sent an A4 sized sample to ISRO to get everything measured and tested in their terms. When ISRO reverted to us with their requirements in the parameters that they recognize, we extrapolated that information to our measurable norm.  Performing metallization in conventional metallizer was fraught with high risks of getting scratches and other aberrations (anomalies which were absolutely unacceptable for a high precision job that we were processing for ISRO).  Further we developed some specialized coatings and applied on the substrate to ensure flawless metallization as required by ISRO.”

Talking more about this major break-through Mr. Jagmohan Mongia, President of Flex Films India said, “The specialized metallized film that we supplied to ISRO was subjected to space environmental tests and passed through all parameters/tests qualifying for space application. Here I would particularly like to acknowledge the unrelenting and hard work by the metallizing team of Flex Films India without which it would not have been possible for us to accomplish this goal.  After this major break-through we now look forward to working with ISRO more closely in other research areas and technologies. This is just the beginning.”

Expressing delight on this breakthrough, Mr. Ashok Chaturvedi, Chairman & Managing Director, Uflex Limited said, “The most gratifying part of this whole engagement is that Uflex has been able to contribute to ISRO’s endeavour of indigenization and becoming self-reliant in space technology applications. This is a perfect example of an Indian polymeric film manufacturer meeting and exceeding the performance parameters set by Indian Space Research Organization. This is a major win for Make in India and a moment of truth for Made in India.”

Uflex is India’s largest multinational flexible packaging materials and Solution Company and an emerging global player. Since its inception back in 1985, Uflex has grown from strength to strength to evolve as a truly Indian Multinational with consumers spread across the world. Uflex today has state-of-the-art packaging facilities at multiple locations in India with installed capacity of around 100,000 TPA and has packaging film manufacturing facilities in India, UAE, Mexico Egypt, Poland and USA with cumulative installed capacity in excess of 337,000 TPA.

All Uflex plants are accredited with ISO 9001, 14001, HACCP & BRC certifications. Uflex caters to markets spanning across the globe in over 140 countries like USA, Canada, South American countries, UK and other European Countries, Russia, South Africa, CIS, Asian and African nations. Integrated within its core business profile are allied businesses like Engineering, Cylinders, Holography and Chemicals which further give Uflex a superior edge above competition.