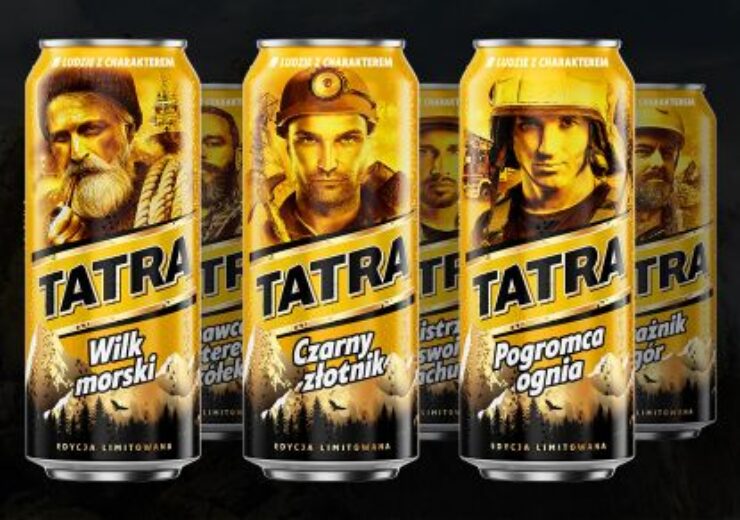 Renowned beer brand Tatra is honouring Poland’s everyday superheroes in a line-up of six limited edition cans that features experts in their field – and the stunning finished Ardagh Group cans show just what can be achieved when vision meets that level of expertise.

Tatra, named for the mountain range on the Poland/Slovakia border, is part of Grupa Żywiec, Poland’s member of the Heineken Group. Exquisitely targeted at beer-lovers of working age, this promotion presents six iconic “people with character” from professions across Poland. Against a base colour of heroic gold, each 500ml can celebrates a master of a particular area of expertise – but in a compelling twist, the professions have been named symbolically rather than literally, inviting consumers to see a part of themselves in each and all of the characters shown.

For example, a hardworking miner is characterised as ‘Black Goldsmith’, while a weather-defying trawlerman is named ‘Sea Wolf’. ‘Master In His Trade’ represents skilled construction and manual workers; ‘Four-Wheel Expert’ proudly wields mechanics’ tools; and ‘Fire Tamer’ is that epitome of heroes: the firefighter. Completing the set is the noble ‘Mountain Guard’ – reflecting Tatra’s longstanding support for Poland’s GOPR (Mountain Volunteer Rescue Service). The men gaze directly outwards, projecting an inspiring sense of strength, in images that are proud and passionate, but gentle in their masculinity.

Achieving such a sophisticated look for the Tatra cans presented several complexities for Ardagh’s local Graphics Team in Radomsko, Poland. Such detailed and nuanced images of faces are particularly difficult to recreate within the limitations of beverage-can printing technology, demanding complex screen-printing and absolute precision at every stage of the design and execution. Nevertheless, the team rose to the challenge, deploying their own expertise and passion to the full while working at the very limits of colour registration parameters with absolute accuracy. The result is an incredibly clear, neat, and feather-like print that can be achieved at full production speed, with all the necessary variation of shades and contrasts throughout the image, and with no quality loss.

Ardagh’s Graphics teams are located in several European countries, to be close to its customers, and speak their local language. Julia Czyżykowska, Tatra’s Brand Manager, said: ‘We appreciated the cooperative approach of Ardagh’s graphics team during the development process. They were professional, engaged and kept working to achieve the best possible results, and we are very satisfied with the final cans.’

Top five glass packaging manufacturers in the world by revenue

Plastic pollution can travel thousands of miles in a few months, study finds

PepsiCo commits to use 100% recycled plastic beverage bottles by 2022

Birdcall teams up with Ball to launch recyclable aluminium cup