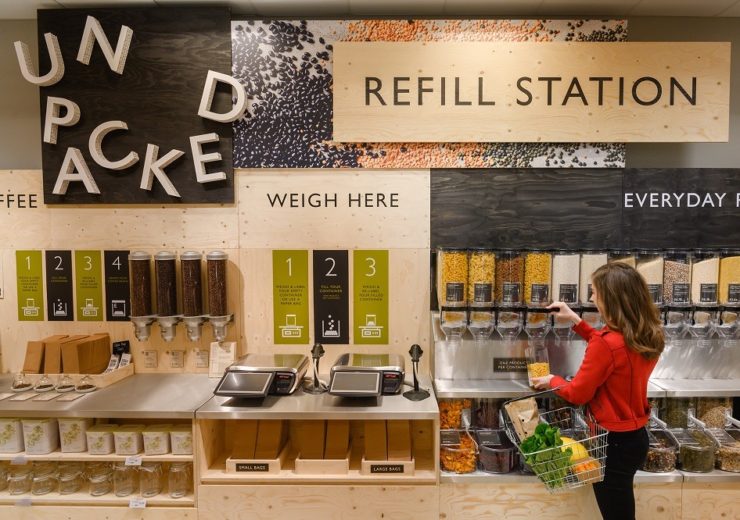 The expansion of Waitrose 'Unpacked' follows on from a successful first trial in Oxford (Credit: Waitrose)

Supermarket giant Waitrose & Partners will extend its “Unpacked” plastic packaging reduction test to a further three UK stores later this year, it was announced on 1 August.

It follows a successful trial of the scheme at the Botley Road shop in Oxford, and will include supermarkets in Cheltenham, Abingdon and Wallingford as part of their refurbishment plans in the next few months.

The project is designed to reduce the amount of plastic packaging in stores, with customers encouraged to bring their own containers to fill with food.

The Botley Road test, which was featured in the BBC documentary War on Plastic, appealed for consumers to give comments on the idea, with more than 7,000 responses received through its in-store “feedback walls”, customer interviews, dedicated website and social media.

Waitrose & Partners’ head of corporate social responsibility Tor Harris said: “The reaction to Waitrose Unpacked has been incredible with the invaluable feedback from thousands of customers giving us the confidence that they are prepared to change how they shop with us.

“We are keen to take the Unpacked concept forward and these additional tests will help us achieve this, as well as understand its commercial viability.

“Through working with our customers and suppliers we will continue to learn and develop ideas which have potential to be rolled out more widely.”

What does the Waitrose ‘Unpacked’ scheme involve?

The Unpacked rollout to the new stores will include a frozen fruit “pick and mix” initiative – where customers can bring in their own containers to fill up.

It will also involve the removal of plastic packaging from flowers and planets – replacing it with 100% recyclable paper certified by the Programme for the Endorsement of Forest Certification.

A set of 28 “essential” products including pasta, rice, grains, couscous, lentils, cereals, dried fruit and seeds, will also be made available through dispensers from which customers can directly fill  their own containers.

New legislation needed to ensure all companies play their part to cut waste, says Friends of the Earth

The news has been welcomed by plastics campaigner for environmental charity Friends of the Earth Julian Kirby, who believes new legislation is needed to make sure all companies play their part to cut waste.

“Customer enthusiasm for less packaging is fabulous news – supermarkets across the UK must take note and do far more to cut down on pointless plastic and packaging in their stores,” he said.

“Where other supermarkets are stuck in the recycling rut, Waitrose has been doing some genuinely game-changing work with its focus on packaging re-use and reduction.

“New legislation is needed to ensure that every business plays it part in cutting waste and phasing out the unnecessary single-use plastic packaging and products that blight our environment.”