Waitrose to roll-out environmental-friendly packaging made from tomato leaves 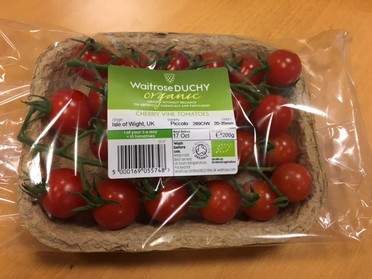 Designed to replace the original plastic punnets, the tomato leaf and recycled cardboard tray will be used as packaging for Waitrose Duchy cherry tomatoes from mid-June.

Waitrose is also planning to launch remaining four Duchy tomato lines in new brown packaging by the end of July.

Waitrose fresh produce head Nicola Waller said: ‘‘We’re serious about looking for alternative packaging materials. This uses materials which would otherwise be wasted which can only be a good thing.

‘‘We will ensure that all our own-label packaging is widely recyclable (using the widely recycled logo), reusable or home compostable by 2025 – and looking for alternative forms of packaging is part of this process”

Recently, Waitrose launched Red Lentil Pasta and Green Pea Pasta in boxes, which are partly made from pulses, enabling to reduce the use of virgin tree pulp by 15%.

The retailer also used a mixture of rye grass and recycled paper to create a packaging for Duchy organic eggs, helping to save 77 tons of wood and paper per annum.

In April this year, Waitrose pledged to remove all takeaway disposable coffee cups from its stores by autumn 2018, in a bid to reduce its environmental impact.

As part of this effort, the retailer initially removed all disposable cups from nine of its UK branches, followed by gradually phase out of the cups from all of its stores in the country.