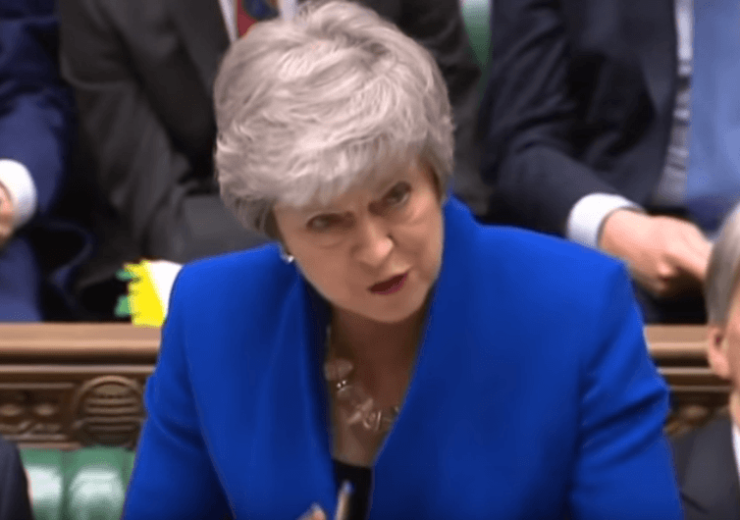 UK Prime Minister Theresa May says the government could put a tax on the incineration of waste if the country’s current recycling targets are not met.

The targets, set by the Department for Environment, Food and Rural Affairs (Defra), are in line with those of the European Union – which aims for 65% of all urban waste to be recycled by 2035.

The UK had initially opposed the targets, which were set out by the EU parliament at the start of 2018, before deciding to commit to them in March last year.

At the British Parliament’s weekly session of Prime Minister’s questions, Conservative MP Dr Andrew Murrison asked Mrs May if the government would be willing to put a pause on new incineration, gasification and pyrolysis applications – processing facilities for burning materials.

Dr Murrison referenced a gasification facility that is about to begin construction this month in Westbury, a town in his South West Wiltshire constituency.

In her response, Mrs May said: “The issue of incineration, as I understand, is a crucial one, particularly for certain local areas.

“We want to maximise the amount of waste that is sent to recycling rather than to incineration and landfill.

“Waste parts play and continue to play an important role in reducing the amount of rubbish sent to landfill.

“But if wider policies don’t deliver our waste ambitions in the future, including those recycling rates, then we will consider a tax on the incineration of waste.

“This would operate in conjunction with the landfill tax, and take into account the possible impact on local authorities.”

A tax on landfill was first introduced by then-Chancellor of the Exchequer Ken Clarke in 1996, alongside the Environment Secretary John Gummer.

The initial tax was proposed to be set at a rate of £7 per tonne, and was introduced on 1 October 1996.

It’s since expanded to the current tax policy, outlined by HMRC in October 2018.

The policy was put forward by current Chancellor Phillip Hammond in his 2017 autumn statement and began on 1 April this year.

The legislation states that the landfill tax rates will go up in line with the country’s Retail Prices Index (RPI), a monthly set of figures from the Office of National Statistics, measuring the change in costs of retail goods and services.

It is expected to change the standard rate of sending material to landfills from £88.95 per tonne to £91.35 per tonne.

Concerns raised on the idea of a UK incineration tax

It’s not the first time the idea of a UK incineration tax has been mooted, with the Treasury reporting in August 2018 it had 162,000 responses for evidence on how tax can be used to reduce plastic waste, which included a call to encourage further recycling as opposed to incineration.

Exchequer Secretary to the Treasury, Robert Jenrick, said at the time: “Tackling the scandal of plastic pollution is one of our top priorities and we know the public is right behind us.

“Our duty to leave the environment in a better state than we found it is absolutely clear and what we’ve set out today is another important step to ensuring a cleaner, greener future for Britain.”

However, some have raised concerns on how the tax could cause more waste in landfills.

This included Environmental Audit Committee chairwoman Mary Creagh, who told the Local Authority Recycling Advisory Committee conference in October 2018: “I have written to the Chancellor calling on him not to introduce a tax on incineration.

“The experiences of other European countries do nothing to boost recycling rates or improve plastic packaging.

“It would drive up costs to councils and council taxpayers and could cause more waste to landfill.”

The UK set to miss its recycling targets

A tax on incineration is increasingly likely, as, according to a study by cardboard packaging company DS Smith, the UK would miss its 2035 recycling goals by more than a decade.

In the Tipping Point report, the company said the reasons behind this included the increased amount of online shopping in the country, as well as the “chronic under-investment in the UK’s waste management system over the past decade.”

DS Smith’s head of recycling Jochen Behr said: “We see a system that doesn’t consider the volume of today’s recycling infrastructure which could be close to breakdown and a number of local authorities looking to adopt the cheapest waste treatment rather than improving the quality of collected dry recyclables.

“It creates a compelling case for a joined-up, systemic change on how the UK deals with waste and recyclables.”