The monomers, made up of atoms of carbon, hydrogen, oxygen, nitrogen, chlorine, sulfur and other elements, are the raw materials of plastics manufacturing 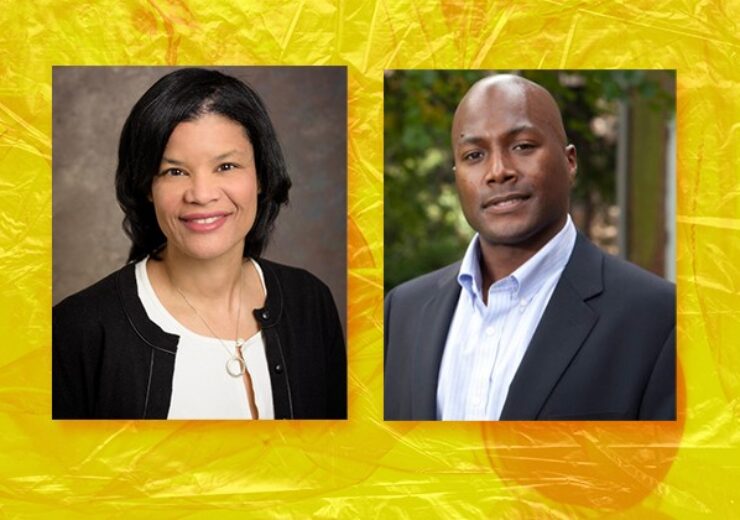 The Center for Plastics Innovation (CPI), led by Professors LaShanda Korley and Thomas H. Epps, III, will focus on chemically transforming plastic waste into fuels, lubricants and other valuable products in an energy-efficient manner. It is one of six new Energy Frontier Research Centers established across the U.S. and the second to be directed by the University of Delaware.. (Credit: University of Delaware.)

Every year millions of tons of plastic bottles, coffee cups, grocery bags and other waste enter our environment, from landfills to vast garbage patches in the ocean. These plastics can persist for decades, posing health threats to humans and wildlife.

Think about how the entire planet would benefit if more of this plastic could be recycled or reimagined instead of trashed.

The Center for Plastics Innovation (CPI), a new research center at the University of Delaware, is now taking aim at that challenge. Funded by an $11.65 million grant from the U.S. Department of Energy, CPI is one of six new Energy Frontier Research Centers (EFRCs) established across the U.S. to accelerate scientific breakthroughs in critical areas.

CPI will bring together researchers from UD, the University of Chicago, University of Massachusetts Amherst, University of Pennsylvania and Oak Ridge National Laboratory to “upcycle” plastic waste — chemically transforming it into fuels, lubricants and other valuable products in an energy-efficient manner.

“Thanks to the exceptional leadership of Professors Korley and Epps, this new Center for Plastics Innovation will be a dynamic force for breathing new life into otherwise wasted materials and energy, thus tackling one of the most important challenges facing our world,” said UD President Dennis Assanis. “The University of Delaware’s researchers and students will be trailblazers in this critical field, making transformative contributions to the environmental health and sustainability of our planet. We wish this exceptional team, and all of its partners, great success with the exciting work ahead.”

As an Energy Frontier Research Center, UD’s Center for Plastics Innovation will play an important role in advancing the nation’s energy future.

“The EFRC program has been one of our most innovative and successful basic science research efforts, driving progress in a wide range of important scientific fields,” said U.S. Secretary of Energy Dan Brouillette.  “Through these research centers, the Department is mobilizing America’s scientific workforce to lay the foundation for the nation’s future energy innovation, security and prosperity.”

Worldwide, more than 350 million tons of plastics were produced in 2018 alone. Only 12% of this plastic waste is reused or recycled, according to an industry report. Current recycling strategies fall far short in recovering material that is as high in quality as the material you started with — a major hurdle the CPI will be working to overcome.

Plastics are formed from polymers, which are chemically bonded chains of repeating units called monomers. These monomers, made up of atoms of carbon, hydrogen, oxygen, nitrogen, chlorine, sulfur and other elements, are the raw materials of plastics manufacturing.

The CPI team is focusing on the most difficult plastics to recycle because of their complex chemical structure. Examples include high-density polyethylene (HDPE), used in containers for milk, motor oil, shampoo and bleach; low-density polyethylene (LDPE) found in sandwich bags and plastic grocery bags; polystyrene used in Styrofoam coffee cups and other food packaging; and poly (methyl methacrylate) (PMMA), from which acrylic sheets such as Plexiglas are made.

“We have a unique skill set at Delaware, with strengths in catalysis, polymer science, computational design, synthetic biology and machine learning,” Korley said. “Our collaborators and partners bring great expertise in computational materials science and enzymatic catalysis, and also contribute characterization and computational facilities critical to advancing this work.”

The CPI team initially will investigate fundamental catalytic and functionalization approaches on the pristine polymers that comprise these plastics waste streams — processes that add new features or capabilities by altering the polymers’ surface chemistry. Then, the team will begin building various levels of complexity into the plastics, such as adding a colorant or a layered configuration, to test strategies on more realistic feedstocks.

In consultation with advisers from industry, academia and the National Institute of Standards and Technology (NIST) in the U.S. Department of Commerce, the team will pursue traditional and additive manufacturing techniques to simulate the manufacturing process of actual products, from a simple flat plastic film to fully dimensional Lego-like objects.

The team will apply different strategies to break down plastics waste — using chemical catalysts and selective enzymes — to “de-polymerize the polymers” and recover pure material for making high-value fuels and lubricants at low temperature. Other catalytic strategies will be explored to transform the recovered materials by changing their electronic properties or by incorporating a “stealth catalyst,” for example, that would activate only on demand.

It is challenging work, in which the power of partnerships can really make a difference.

“This center brings together a highly collaborative and multifaceted team in order to provide transformative solutions to a critical problem impacting the environment,” Epps said.

Levi Thompson, dean of the UD College of Engineering, said this new center further cements the college’s status as a destination for talented people to collaboratively tackle important societal problems.

“We have deliberately worked to create a culture and climate that supports and celebrates innovation,” said Thompson. “LaShanda and Thomas have assembled an outstanding team that will, for many years, help improve the quality of life for everyone through research on polymeric and other soft materials.”

UD: A place for frontier research
The new center stands to impact UD and the broader community in numerous positive ways, according to Charles G. Riordan, vice president for research, scholarship and innovation.

“The Center for Plastics Innovation will advance solutions to the global plastics pollution crisis through ingenuity and teamwork,” Riordan said. “As an Energy Frontier Research Center — the second to be established at UD — CPI will bring together established and early career faculty to inspire creative solutions while also providing our students with valuable research experiences and opportunities for industry collaboration.”

UD’s existing EFRC, the Catalysis Center for Energy Innovation, directed by Dion Vlachos, the Allan and Myra Ferguson Professor of Chemical and Biomolecular Engineering, was established by the U.S. Department of Energy in 2009. The center has developed processes for transforming biomass such as wood chips and switchgrass into sugars and oils for use in products ranging from chemicals to advanced materials.

“CPI’s formation is exciting as it can profoundly impact one of our major ecological and societal problems and is a culmination of UD’s collaborative culture and the leadership of our polymers colleagues,” Vlachos said.

Korley credits the collaborative nature of UD’s research community as a key contributor to the funding success of both the Center for Plastics Innovation, and of UD’s recently announced Center for Hybrid, Active and Responsive Materials (CHARM), funded by an $18 million grant from the National Science Foundation.

“What is great about Delaware is that when I arrived two-and-a-half years ago, several faculty members began conversations about core research strengths and interests, and we started to brainstorm,” Korley said. “This collaborative atmosphere really allowed these ideas to take off. We are excited to launch these ideas from concepts to fundamental scientific advances with the ability to transform the state of our environment.”

The Center for Plastics Innovation team would like to offer a special thanks to Joy Mintzer, senior sponsored program coordinator in the College of Engineering, and Jaynell Keely of the Delaware Energy Institute, for proposal support.