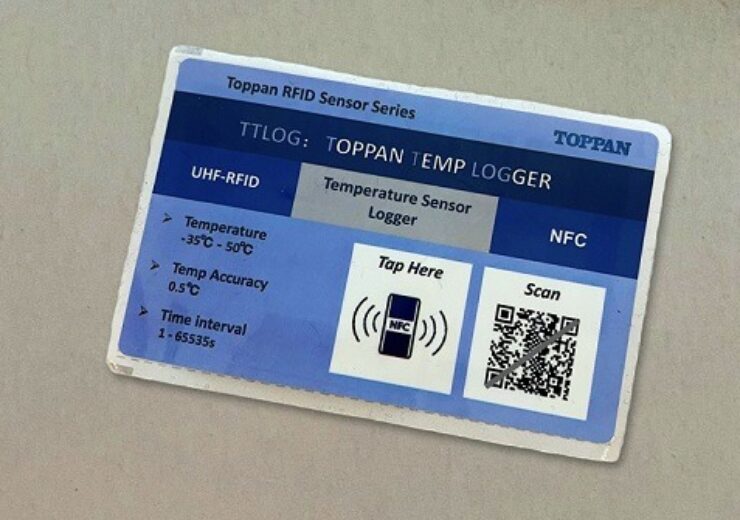 Toppan, a global leader in communication, security, packaging, décor materials, and electronics solutions, has developed a thin, card-sized temperature logger label that enables temperature to be measured and recorded at regular intervals and data to be sent to a database via wireless networks.

When attached to freight, Toppan’s temperature logger label automatically records the surface temperature at an interval set by the shipper. Two frequency bands are available: UHF, which facilitates communication over relatively long distances of about five meters, and NFC, which is becoming increasingly incorporated into smartphones. Log data (record of date, time, temperature, etc.) from shipment to final destination or a given point on the route, which is read using a dedicated app, and traceability data from the reading location are sent to a cloud-based management system to facilitate chronological tracking and management of temperature changes during transportation.

Toppan’s temperature logger label is equipped with a single-use battery and adopts a simple structure without a terminal for data downloading or a display. Toppan therefore plans to supply it at less than one tenth of the cost of existing temperature logger devices.

The label was used as a tool to measure and record the surface temperature of container boxes during a pilot test conducted between October 2021 and March 2022, which involved transporting Japanese sake from major breweries in Japan to cold storage facilities in China. Sales of the temperature logger label are scheduled to be launched in June this year.

In contrast to general logistics, long-distance transportation of food requires strict temperature management. Fresh products such as meat, fish, and vegetables as well as chilled items such as dairy products and prepared foods need to be transported at specific temperatures set for each product to maintain freshness and prevent quality deterioration.

Temperature logger devices that measure and record temperature at fixed intervals are widely available as tools to manage temperature during transportation. Prices ranging from tens to hundreds of dollars per unit, however, mean that attaching them to every container is costly, and the workload for their recovery after use has also presented an obstacle to their adoption. This has led to increased demand for low cost temperature loggers suitable for one-way use that do not need to be recovered in scenarios requiring temperature management over long-distances, such as international shipping.