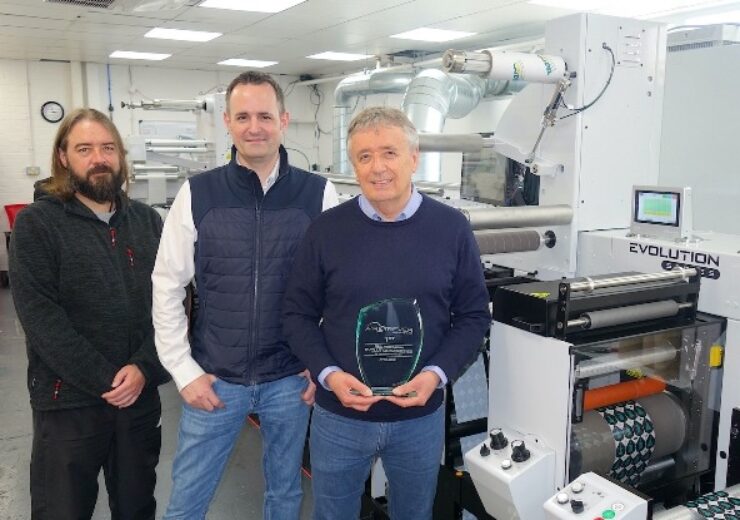 In one of the more unusual applications for narrow web flexo technology, UK manufacturer of dart and accessories, Retriever Sports, has added a Mark Andy Evolution Series E5 to its production facility in Slough, some 20 miles west of London. The six-color flexo press is the first of its kind to be installed in the UK and replaces one of two Mark Andy Scouts that have been in use at Retriever Sports since shortly after the millennium.

The company is renowned worldwide for its dart products, which it supplies to both the leisure and professional markets. Founded by husband-and-wife Tom and Katie Pope in 1978, Retriever Sports remains under family ownership and is run today by Ian and Marc Bennett, along with Jacqueline Bennett and Geraldine Osborne. Together with a staff of 35, they manufacture around 10 million sets of dart flights each year in their 20,000 sq ft factory. In addition to the printing technology onsite, they also have CNC, injection molding, vacuum forming, laser marking, pad printing and automated bagging machines.

According to Ian Bennett: “We consistently apply high standards of manufacturing to our dart products and build technical innovation into each and every component that we produce. Our commitment to providing a superior product and outstanding service to our customers has seen the company grow into one of the largest manufacturers of darts and accessories in the World.”

It was into this high-quality engineering environment that Mark Andy sold two 10” Scout presses in the early 2000s. Used to print the variety of colorful dart flights that Retriever manufactures, the Scouts have given great service to the company over the past 20 years, so for Ian Bennett it was a combination of reliability and Mark Andy’s reputation and support over the years that steered him towards the new Evolution Series E5 when the time came to upgrade capacity.

According to Phil Baldwin, Mark Andy’s UK & Ireland Sales Manager: “The new Evolution Series press is a fully servo-driven 13” six-color flexo line, with full UV curing and an overhead rail system for moveable cold foil application.” According to Ian Bennett, most dart flights are six colors, or five plus varnish, and the moveable cold foil system allows for the greater degree of creativity in decoration that the market now demands. The new press also features pacing rollers that are the same size as the impression rollers, which improves tension control for superior register whether in manual or auto mode.

Since full commissioning in April, and two weeks of training from Steve Bull, Mark Andy UK’s print instructor, the new Evolution Series has added 50% to Retriever’s output. From typically 130,000 sets per week beforehand, the company is now manufacturing in excess of 200,000 sets of 75 – 180-micron PE that is used. Crucially, in addition to extra volume the new Mark Andy has reduced delivery times at a time when higher demand would normally have extended them.

Retriever Sports now exports to all the established dart playing nations in the World and is expanding into supporting countries that are trying to develop the game as a major recreational past-time. With a number of significant innovations to its name, the company views its ongoing investment in the latest technology as key to staying ahead of the competition. “The new Mark Andy Evolution Series is part of that process,” concluded Ian Bennett.