The grant program builds off the CMI research released last year that found it is critical to capture all used beverage cans (UBC) flowing through material recovery facilities (MRF), which play a critical role in the U.S. recycling system of sorting recyclables 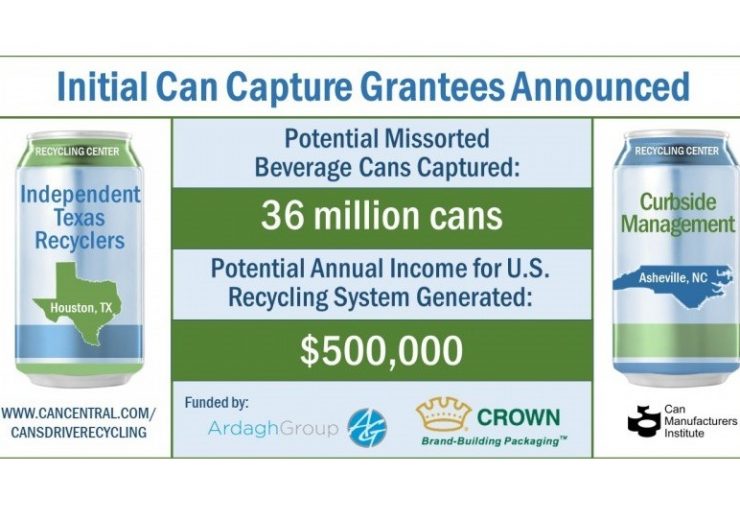 Recycling facilities in North Carolina and Texas will use Can Manufacturers Institute (CMI)’s aluminum beverage can capture grants to install equipment that will result in 540 tons, more than 36 million aluminum beverage cans, per year being captured that were previously missorted. These recycling facilities are the initial recipients of a grant program made possible with the generous support of can manufacturers Ardagh Group and Crown Holdings. The Recycling Partnership helped select the grantees and will provide technical assistance to ensure successful implementation.

The grant program builds off the CMI research released last year that found it is critical to capture all used beverage cans (UBC) flowing through material recovery facilities (MRF), which play the critical role in the U.S. recycling system of sorting recyclables. This research concluded that most MRFs in the United States would not be able to operate without the revenue from UBCs considering they are consistently the most valuable beverage package material in the recycling stream.

Due to the success of this initial round of grantees, a new round of applications to the pilot program has been added. The deadline to submit an application is Tuesday, May 11.

About the grant announcement, CMI president Robert Budway said, “It is important for the health of our nation’s recycling system to capture every aluminum beverage can for recycling. Aluminum beverage cans provide 33 percent of the revenue to MRFs in non-deposit states, which is more than any other residential recyclable. Additionally, CMI beverage can members, Ardagh and Crown, want all used cans back to make them into new cans using the infinitely recyclable aluminum. Capturing missorted cans at the MRF is a cost effective way to capture the valuable aluminum from cans. The return on investment of capturing incremental used can volumes is so high that additional equipment MRFs install will pay for itself in a short period of time.”

“As one of the founding organizations of what would become The Recycling Partnership, we are grateful to CMI’s continued dedication to improving the U.S. residential recycling system, ensuring that more used beverage cans are sorted and recycled, creating healthier, more efficient, and more cost-effective programs at scale,” said Rich Simon, director of MRF advancement at The Recycling Partnership. “With The Partnership’s extensive expertise in grant programs – including other recent grants with MRFs – and our systemic approach to improving residential recycling, we will ensure this program achieves its goals of recycling more aluminum cans and improving the U.S. residential recycling system.”

The grant money provided to these two MRFs is being combined with other sources of funding at a ratio of more than one to ten. The two MRFs are operated by Independent Texas Recyclers (ITR), Houston, TX, and Curbside Management, Asheville, NC.

The ITR facility is a single-stream MRF serving the Houston area. It will put the grant funding toward installing a second eddy current to capture UBCs from the containers in the residue (i.e., material destined for landfill) line.

The Curbside Management facility is a single-stream MRF serving Asheville, NC, and surrounding communities, and it is the largest MRF in Western North Carolina. The facility is replacing its existing eddy current with a state-of-the-art eddy current that can more effectively sort aluminum packaging at the volume flowing through the facility.

ITR and Curbside Management are just the first two recipients, with additional grantees expected to be announced in the middle of this year and initial impact results expected by the end of 2021. The Recycling Partnership led the effort to methodically analyze and rank the received proposals. These grants are part of an aluminum can capture program that was initially announced in October 2020 with a request for proposals released in January 2021.

Capturing and recycling these more than 36 million aluminum cans each year will have a significant environmental and economic impact. These aluminum cans when sold will generate more than $500,000 in much needed revenue for MRFs. When these cans are recycled, it will save more than 15 million kilowatt hours of energy and will avoid more than 3.5 million kilograms of carbon dioxide equivalent emissions. That corresponds to saving enough energy for each person in the United States to watch a 40-inch LED TV for one hour and to avoiding emissions from driving an average car nearly 9 million miles, which is more than 350 times around the Earth.

This grant program is the latest aluminum beverage can industry effort to build on its industry-leading recycling rates and recycled content. The grant program will foster additional examples of MRFs that have successfully invested in can capture equipment, providing case studies to spur more MRFs to invest in aluminum can capture.