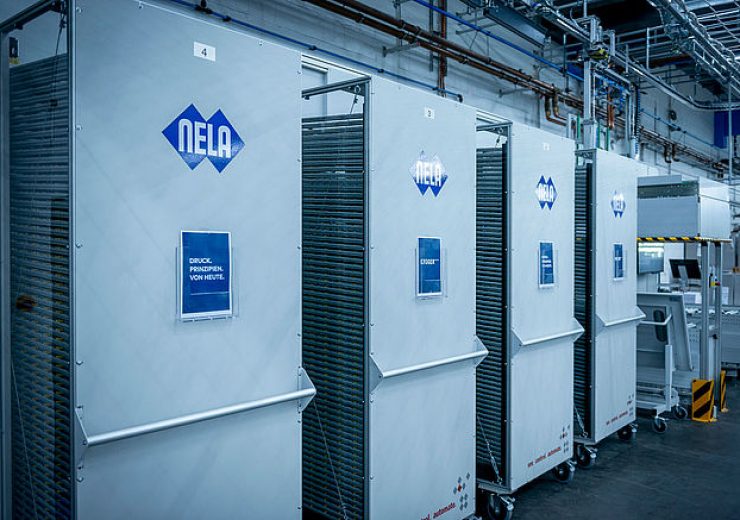 The plate magazine holds up to 256 plates, which are subsequently transferred to the Rapida 106 X in accordance with the planned job sequence. (Credit: Koenig & Bauer AG)

Krüger Druck+Verlag, a full-service print provider based in the small town of Merzig in Germany’s Saarland, has been an active pilot user of the Rapida 106 X for several months now. Its eight-colour press in 3b format is configured for 4-over-4 perfecting, incorporates an additional inline coater, and is integrated into a fully automatic plate logistics system.

With operating speeds of up to 20,000 sheets per hour – which also extends to perfecting – the Rapida 106 X now represents the backbone of the company’s production facilities.

Markus Weisgerber, owner of the family-run business, explains the decision to invest in such a highly automated press: “The comprehensive automation features enable us to significantly increase our productivity and efficiency.”

Faster makeready, reduced start-up waste, high production speeds and a fully digital workflow from the MIS through to the control console of the Rapida 106 X have allowed us to make major optimisations to the individual process steps. Other benefits are provided by inline colour control and sheet inspection with QualiTronic PDF. “The inline comparison of each printed sheet with the customer PDF has allowed us to measure the actual print quality for the very first time, instead of just the colour values,” as Weisgerber reports.

Krüger Druck+Verlag prints a large range of different flyers, folders, magazines, books and many other commercial products with either wire stitching or adhesive bindings. The run lengths for many of these products are on the decline, while, in contrast, page counts are simultaneously increasing and the demand for multiple versions and variants is continuing to grow, thereby making fast makeready a decisive advantage. The simultaneous makeready processes, however, make the Rapida 106 X virtually unparalleled in this regard. The modular PlateTronic plate logistics system, which links the platesetter directly to the plate changers on the individual printing units by means of a plate magazine with a capacity for 256 plates, represents another invaluable contribution to production automation.

A tried-and-tested method of identifying the plates is the use of a 2D code, which is automatically added to each plate as part of the platesetting workflow, and facilitates subsequent navigation to the respective printing unit. Interfaces to the MIS and to the console of the Rapida 106 X ensure reliable, correct and just-in-time delivery to the press by means of a conveyor system. The plate magazine makes a new plate available for transport to the Rapida approximately every 20 seconds. While one set of plates is waiting for an upcoming job changeover, another set can already be loaded using the press console. This allows the printer to see the actual plates for the next job, along with the console job list. Once a plate change has been completed, the old plates are removed to a central collection point – fully automatically and without manual invention.

The PlateTronic plate logistics system features a fully modular in design, and can be adapted to the specific requirements of the respective print company using it. The system version installed at Krüger Druck+Verlag enables the printing of up to 20 jobs per hour with run lengths of around 300 sheets each. A job changeover occurs after approximately one minute of production. The press can continue alternating between printing and makeready for as long as necessary.

Krüger Druck+Verlag has experienced a significant increase in its real net output ratio over the past years. Alongside the recent investments in the printshop, a new 3,000 m2 production building has been erected for the post-press department. It provides the space necessary for innovative systems and process upgrades. The company already works to PSO specifications, but is now taking its commitment one step further: the tolerances are up to 50 per cent lower than the ones defined in the standard. This gives customers additional assurance that they will receive absolutely flawless print products.