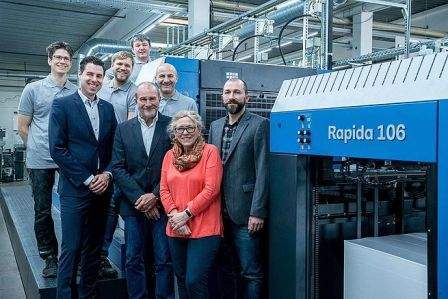 The new Rapida 106 has been in operation at PMS Offsetdruck in Wendelstein near Nürnberg since the starting of March.

PMS has made purchase decision based on the ability of the new press to die-cut complicated forms inline. It needs fast conversion of the coater between die-cutting and coating set-ups.

The company is using the machine in various applications ranging from 55gsm paper to 450gsm board.

The system, which offers flexibility to install with 9 printing and inline finishing units, is provided with DriveTronic SIS sidelay-free infeed.

PMS has also invested in new trimming line such as Polar 137 XT Autotrim, and an MBO T800 folder with fully automatic Palamides delivery system to improve its production operations.

PMS Offsetdruck senior director Wilfried Buhr said: “We are not your printer if you only want it cheap. We produce high quality.” That includes offering genuine full service to customers – from business cards to new design developments which help them to present their products at the point of sale.

“That could mean displays or dispensers which have yet to be produced in the envisaged form, or small items which require complex handling and exceptional creative input.”

The investment in the new 41-inch press, which will replace an existing Rapida 130 press at the facility, is help Curtis Packaging maximize it coating expertise.