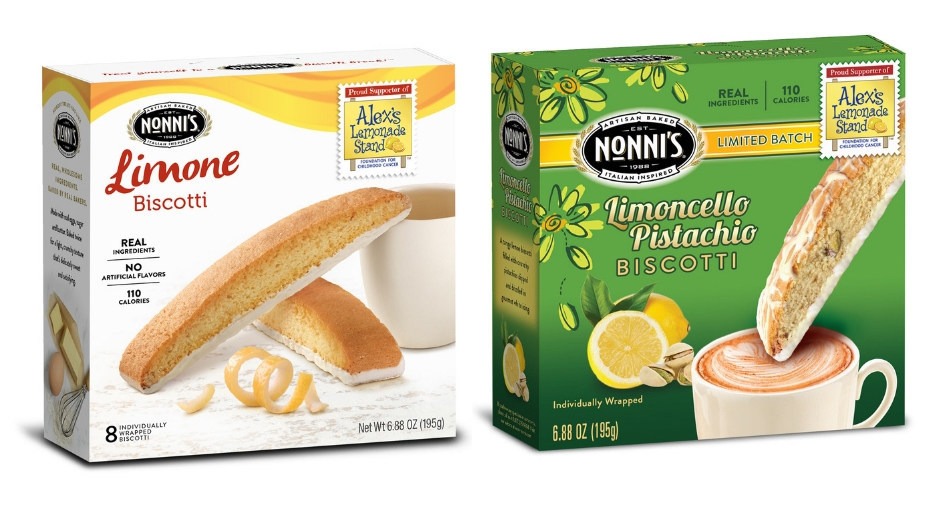 Additionally, Nonni’s Limone Biscotti, available year-round, will debut new packaging highlighting the partnership with ALSF. ALSF is a non-profit organization with a mission to change the lives of children with cancer through funding impactful research, raising awareness, supporting families and empowering everyone to help cure childhood cancer.

“It is an honor to join Alex’s Lemonade Stand Foundation in the fight against childhood cancer,” said Patricia Wong Bridges, senior brand marketing manager for Nonni’s Foods. “The moment we heard Alex Scott’s incredible story, we knew we had to give back in any way we could.” Nonni’s partnership with Alex’s Lemonade Stand Foundation also includes a $25,000 donation to help fund life-saving research and support communities impacted by childhood cancer.

Liz Scott, Alex’s mother and the Co-Executive Director of ALSF, is equally thrilled by the partnership. “It’s amazing to see brands like Nonni’s step up to help make a difference to families impacted by childhood cancer,” she said. “We’re excited to see what this year has in store and foster a partnership with a company such as Nonni’s. The lemon-inspired flavors from Nonni’s Biscotti are the perfect avenue to further share our mission across the U.S.”

Limone Biscotti: A crunchy lemon cookie layered with a light coating of white icing for a flavorful experience to brighten any spring day. This Nonni’s treat is only made sweeter by its support of Alex’s Lemonade Stand Foundation.