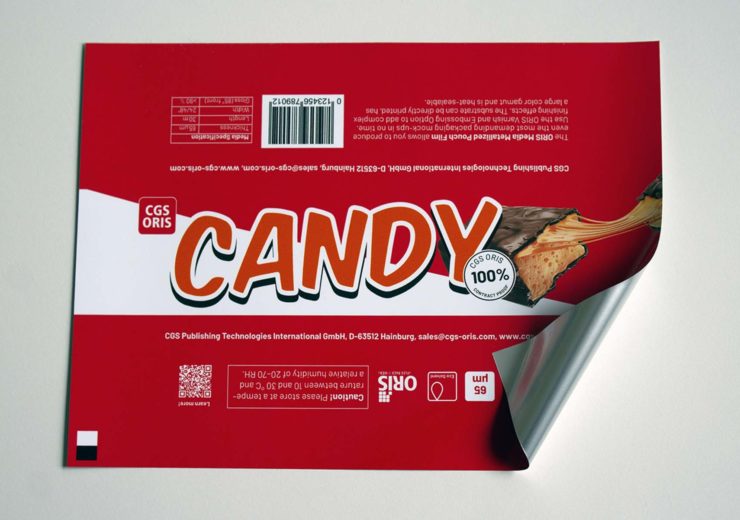 CGS ORIS adds another unique pouch film to its media portfolio for solvent printers. A special feature of the material becomes apparent at first glance.

The pouch film has both a white (printable) and a metalized side and thus corresponds in appearance and tactility to a typical aluminum composite film, such as is often used in the food industry for pouches, snack bars, or similar products. With this film, perfect mock-ups can be produced for this area, which cannot be distinguished from the original.

“With the market launch of what is now the fourth heat-sealable film, we have responded to the great demand from our users. Lightweight sachets, stand-up pouches, etc. made of composite films are increasingly replacing the traditional types of packaging on the market. This is obviously also reflected in the increased demand for respective mock-ups. These pouch films are currently very much in trend and are in great demand. The films can all be printed quickly and easily and then converted into a perfect prototype. They are suitable for a variety of different packaging prototypes without having to resort to the original substrate,” comments Heiner Müller, Sales Director Packaging at CGS ORIS.

Thanks to the white-laminated side of the substrate, it offers several advantages. Fewer passes are required and the ink coverage is significantly reduced because white no longer needs to be printed. For example, a snack bar, which often consists of white-laminated composite films, can be easily produced. The printable white layer has high opacity and completely covers the inner film.

This of course also shortens the otherwise necessary drying times and makes the entire production process much faster and more efficient. The new material now makes it even easier to meet the great demand for mock-ups and their increasingly complex designs and to satisfy the increased requirements for packaging samples perfectly and cost-effectively.