British multinational retailer Marks & Spencer (M&S) has launched a new initiative which will allow customers to bring back non-recyclable plastic packaging that is then recycled into playground equipment. 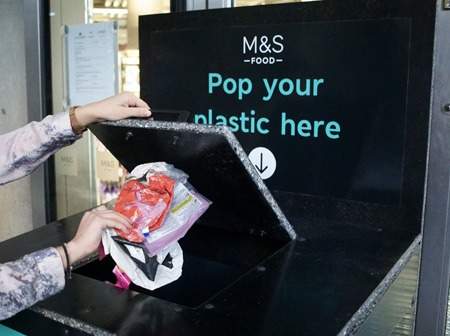 Image: The scheme has initially launched in Food and Beauty Halls at eight of M&S stores. Photo: Courtesy of Marks and Spencer plc.

Under the initiative, customers are provided with new M&S recycling bins to drop varied plastic packaging like black ready meal trays, crisp packets, sauce sachets and certain cosmetics containers, all of which are currently not recycled by local councils and end up in landfill.

The retailer giant said that it has pledged to give collected plastic a purpose by recycling it into store fittings, furniture and playground equipment for schools.

The company is expected to extend the scheme to rest of its stores nationwide by the end of 2019 and install collection bins made out of recycled plastic collected from the first eight stores.

M&S has partnered with Wastebuster, a waste education social enterprise, to introduce recycling collection points to primary schools across the country. Through this, pupils will be taught about the importance of recycling and reducing plastic waste.

M&S senior packaging technologist Laura Fernandez said: “As a business, we’re committed to reducing the amount of plastic we use, and we have already started phasing out non-recyclable packaging from our products. As we continue to work towards our plastic reduction goals, we want to go a step further and help our customers and the next generation to have a real impact on the environment.

“Customers often don’t know how best to recycle certain types of plastic or where it goes after being collected by local councils. We’re on a mission to provide a greater awareness of landfill avoidance and plastic recyclability, while ultimately helping our customers to give plastic a new purpose and support a truly circular economy.”

M&S has partnered with plastics technology firm Dow to give the collected plastic a new purpose and support the scheme.

The take-back initiative follows the launch of a three-month trial at M&S’s Tolworth store, where it has removed plastic packaging from over 90 lines of fruit and veg and introduced greengrocers to the shop floor.