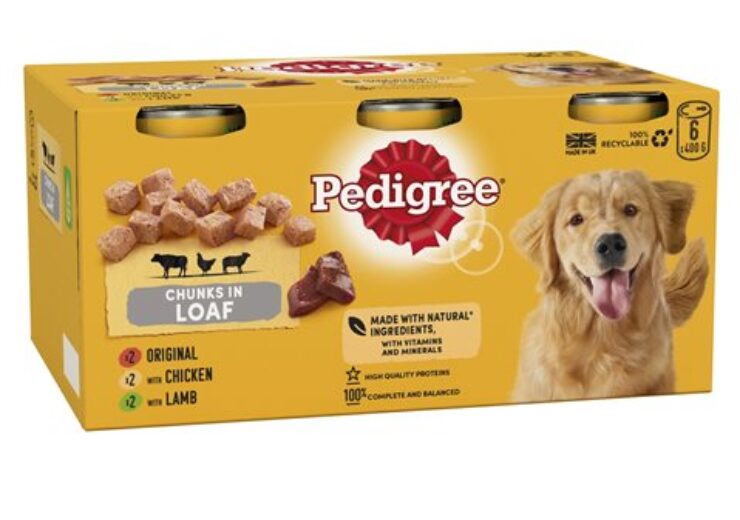 Mars Petcare UK has replaced plastic shrink film with cardboard packaging for some of its products. (Credit: Mars, Incorporated)

Mars Petcare UK has announced the replacement of all plastic shrink film consumer packaging with cardboard across all mixed multipack cans of Pedigree, Whiskas, Chappie and Kitekat, as part of its sustainable efforts.

The latest initiative is expected to eliminate 180 tonnes of plastic from the environment per annum.

The new recyclable cardboard packaging is said to remove 15 million individual pieces of plastic per year.

Mars stated that the latest move is based on the recent partnership with Pets At Home, which placed in-store recycling points for pet food packaging across 40 UK stores.

The move is also supported by the company’s participation in Asda’s trial of in-store refill zones, which offered the first pet care offering with products from Mars brands such as Whiskas and Pedigree.

The company has also reduced the packaging of Pedigree Schmackos by 12% and produced thinner Dreamies 60g packs, thereby saving a combined 27.6 tonnes of virgin plastic in the UK.

Mars is focusing on redesigning its packaging portfolio to achieve its goal of using 100% recyclable, reusable or compostable packaging by 2025.

In November last year, Mars collaborated with chemical firm SABIC and packaging supplier Huhtamaki to include food-grade recycled plastic in the packaging of pet food brands to build a circular economy.

The company also announced that it aims to incorporate recycled polypropylene plastic into the primary packaging for some of its pet food brands from this year.