KHS has unveiled the fifth generation of its InnoPET Blomax stretch blow molders at BrauBeviale 2018, a capital goods exhibition for the beverage industry held in Nuremberg, Germany. 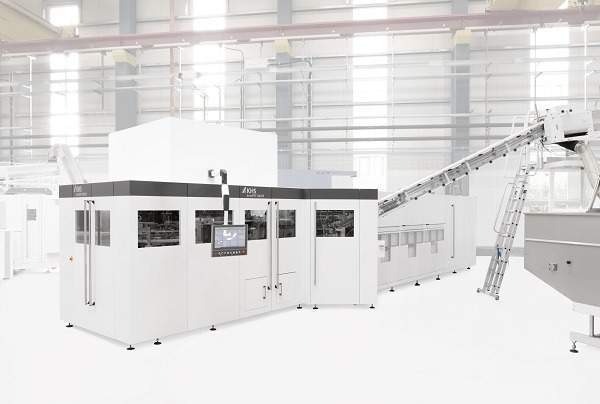 According to the company, the InnoPET Blomax Series V gives its users both sustainability and powerful technology with the machine having a production capacity of up to 90,000 PET bottles an hour holding between nearly 0.2 and 3.0 liters.

The fifth generation stretch blow molder is capable of manufacturing lightweight or premium variants as reliably as individual containers and bottles, claims KHS.

Based on requirements, six to 36 blow stations are possible with the new machine, said the company. Each of the blow stations has a capacity of up to 2,500 bottles per hour.

The quick-change system format changeovers of the InnoPET Blomax Series V involve only a few manual adjustments to be made in a very short time, thereby ensuring permanently high line availability.

KHS believes that the new series of stretch blow molders ties in seamlessly with the company’s blocked machine strategy. Furthermore, the machines can be simultaneously combined with a filler, labeler or Plasmax barrier technology or with various modules.

The InnoPET Blomax Series V is also claimed to give a savings of up to 40% in energy compared to the previous version because of the implementation of a new heating concept, said the company.

KHS block and stretch blow molding technology product manager Marco Böhnke said: “We’ve always listened closely to what our customers have to say and work this into the continuous improvement of our stretch blow molder. In this series the greatest technological advance came with the development of the machine’s new heating concept, however.

“With the new Series V generation of machines we want to define just what a stretch blow molder can do.”

KHS also announced that it is offering the Eco version of the Innofill Glass DPG bottle filter, which it says will help customers in achieving savings in the areas of CO2, water and power. Apart from giving enhanced resource efficiency, the glass bottling systems give benefits in the areas of filling process monitoring and adjustment, better efficiency and quality assurance.