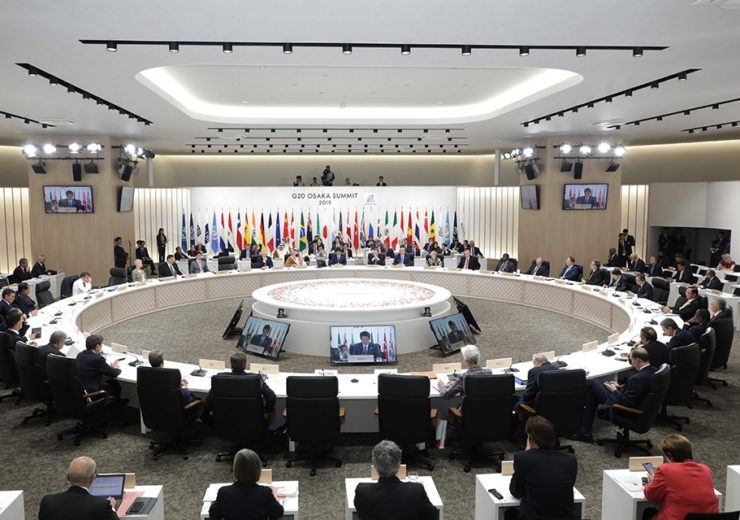 At this years summit, the G20 agreed to how each members was going to implement its Actions of Marine Plastic Litter, laid out at the meeting in Hamburg two years ago (Credit: G20)

Its comments were made in response to the G20 setting out its implementation framework of its “Actions on Marine Plastic Litter”.

The foundation for this was set out in the 2017 summit in Hamburg, with the declaration made this year giving a more concrete framework of how the Group of Twenty aims to do this.

The announcement, made at this year’s summit in the Japanese city of Osaka, listed a set of voluntary commitments that members were encouraged to take part in.

Included in this was the promotion of a comprehensive life-cycle approach to urgently and effectively prevent and reduce plastic litter discharge to the oceans, and the sharing and updating of information on relevant policies, plans and measures.

A WWF spokesperson said the introduction of these goals at an international level is a meaningful step.

“It’s encouraging that G20 leaders have announced the Osaka Blue Ocean Vision, including a goal of eliminating the leakage of plastic pollution into our oceans by 2050,” she said.

“WWF welcomes the affirmation that only reducing plastic pollution to zero is sufficient in avoiding its large environmental, social and economic impacts.

“The introduction of a goal at the international level is a first meaningful step in the global response to the plastic pollution crisis and provides important direction to the efforts of both governments and businesses.

“Nevertheless, we still need to see faster action for our planet. A global goal of eliminating plastic leakage into our oceans by 2030 is necessary.”

The WWF is also urging government leaders to start negotiations for a new treaty to combat marine plastic pollution.

“What we need now is urgent action in response to the interlinked environmental challenges we face,” the spokesperson added.

“While most G20 countries have reaffirmed their commitment to achieving the goals of the Paris Agreement, WWF strongly urges the group, which holds 85% of the world’s GDP, to commit to delivering more ambitious nationally determined contributions before 2020 by announcing them at UN Secretary General’s Climate Action Summit planned for 23 September in New York.

“WWF also calls on world leaders to secure an international commitment to stop and reverse the loss of nature.

“We need a new deal for nature and people as comprehensive and ambitious as the Paris Agreement on climate change that puts our natural world on the path to recovery.”

Alongside an agreement of the implementation of the G20 Actions on Marine Plastic Litter, the G20 also shared the Japan-led “Osaka Blue Ocean Vision”.

Covering a range of policies, the vision aims to hit a target of 2050 for a reduction of additional pollution by marine plastic litter.

It aims to improve the strength of the waste management systems in developing nations through bilateral and multilateral commitments such as Official Development Assistance – also known as the overseas aid budget.

Martin Kersh, executive director of the Foodservice Packaging Association, told NS Packaging he believes this is the best way to tackle the pollution problem.

He said: “It needs to address a proper, sophisticated, modern waste management infrastructure in the most polluted nations.

“Therefore, to tackle the issue at source, particularly if you like the ten most polluted rivers in the world, it means putting our hands in our pockets, it means increasing overseas aid and directing some of the funding.

“And it’s not just building facilities – it’s education to get people to put items into the correct bins and so on, to make sure we are not adding to the problem by continually exporting stuff they are unable to process.

“For the moment, the response to the G20 has got to be ‘come on, let’s make a concerted effort to invest in the right places and into the right equipment’.

“This is where it will make the biggest difference.”

Zoë Lenkiewicz, head of programmes and engagement for WasteAid UK, said that although the organisation welcomed issues of plastic pollution being discussed, the commitments made don’t go far enough.

“We continue to call for binding targets that hold polluters and governments responsible for the growing global pollution crisis,” she added.

“Open dumping and burning of plastic waste causes costly impacts on both the environment and society, both of which disproportionately affect the poorest.

“Our planet, and the three billion people around the world who have no waste management, deserve better.”