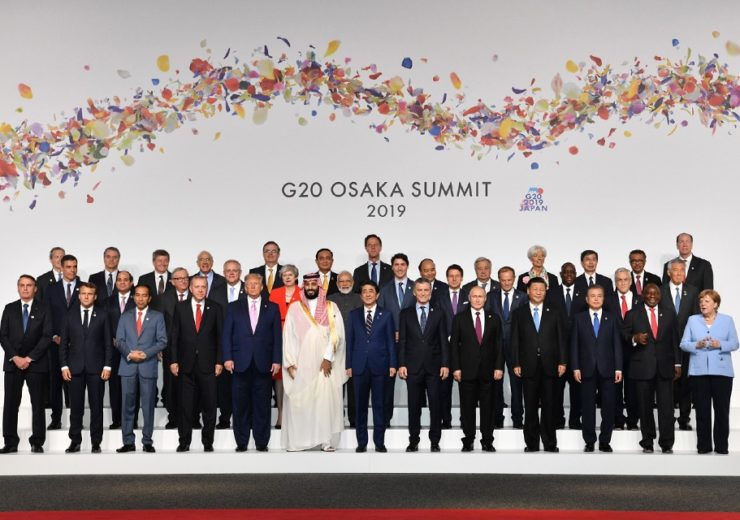 Marine plastic litter has been a topic of conversation at the past three G20 summits (Credit: G20)

A new commitment to the problem of marine plastics was one of the key environmental outcomes at the latest G20 summit.

As political leaders gathered in the Japanese city of Osaka for the 14th summit, they highlighted the importance of collaboration among major nations and investment into waste management systems in developing countries.

Marine plastic was first addressed at the 2017 summit in Hamburg, with the unveiling of the Marine Litter Action Plan.

Its recommendation included the improvement of the global waste management system and the facilitation of extended producer responsibility – in which packaging manufacturers pay for the collection and disposal of their products.

Speaking on the opening day of the 2019 summit on Saturday, outgoing UK Prime Minister Theresa May said: “The facts, which are clear, should guide us: we are running out of time to act.

“We need a five-fold increase on existing 2030 commitments to remain below 1.5 degrees of warming.

“In addition to stronger national commitments, we need determined implementation, and a change in how we invest.

“And we need to build resilience, both in our own societies and economies, and in the most vulnerable countries.

“We can only tackle this crisis, and fully reap the benefits of the transition, if we act together.

“These next few years are critical. This is why this crisis has become such a high priority for the UK.

“Our citizens – and our youth in particular, whose lives will be shaped immeasurably by climate change – demand action.

“We will be judged by history on how we act in the next few years.”

The Group of Twenty was founded in 1999 with the purpose of bringing together systemically important industrialised and developing economies to discuss key issues in the global economy.

After much discussion by the world leaders on Saturday, 19 out of the 20 in attendance agreed to the climate change commitments – we take a look at each agreement.

Within the summit’s 13-page leaders declaration was a commitment to the Japan-led Osaka Blue Ocean Vision.

The policy follows what is called the MARINE initiative, which looks at four principle ways to improve the world’s oceans, tackling issues such as the management of wastes, recovery of marine pollution, innovation and empowerment.

The goal of the vision is to reduce additional pollution of marine plastic litter by the year 2050.

Among the ways it aims to achieve this target is by providing developing countries with assistance through bilateral and multilateral commitments like Official Development Assistance (ODA) – also known as the overseas aid budget.

This budget will provide assistance to develop capacities and institutions, including waste-related legal frameworks and sorting or collection systems, to promote waste management and the three Rs – reduce, reuse and recycle.

It will also help formulate national action plans to address the problem of marine litter.

The declaration aims to promote collaboration with businesses, and help them form partnerships with NGOs and local governments.

Through doing so, it hopes to facilitate the export of infrastructure services, such as waste management facilities, and introduce plastic alternatives and technology related to recycling.

How the G20 intends to implement its ‘Action Plan on Marine Litter’?

Alongside an agreement with the Osaka Blue Ocean Vision, the G20 outlined moreover how it intended to implement its “Action Plan on Marine Litter”.

First announced in 2017, the leaders renewed their commitment to the plan at the 2018 summit, hosted in the Argentine capital of Buenos Aires.

This weekend, it announced some voluntary actions it was encouraging G20 members to implement in accordance with national policies, approaches and circumstances.

One of these actions is the promotion of a comprehensive life-cycle approach to urgently and effectively prevent and reduce plastic litter discharge to the oceans.

The declaration also advocates the sharing and updating of information between members across relevant policies, plans and measures taken or to be taken in line with the plan, and the promotion of policies and measures through peer learning from best practices.

How the G20 intends to monitor marine litter

Within this recommendation is the co-ordination of scientific research and the sharing of knowledge, such as the impacts of plastic pollution on human health, and marine biodiversity.

The hope is that each initiative will raise global awareness of the importance of urgent and effective actions at all levels to prevent and reduce plastic litter discharge to the oceans, alongside promoting sustainable consumption and production.