The 'Return to Sport' range is scalable from a lone fan to a full house of up 100,000, and can be delivered to clubs and installed within a matter of days 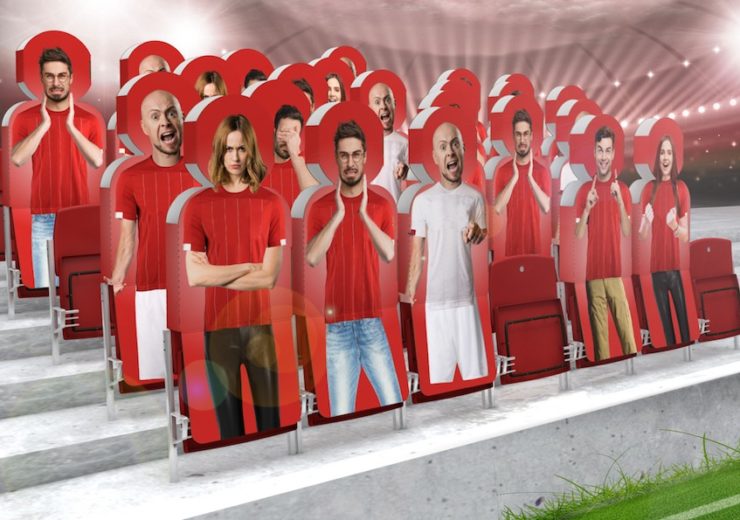 DS Smith's range is fully scalable, with the company capable of installing up to 100,000 cardboard fans into stadiums (Credit: DS Smith)

Packaging giant DS Smith is offering professional football clubs the opportunity to pack stadiums with cardboard fans ahead of the sport’s return this week.

The Premier League is set to restart on 17 June, with games being played behind closed doors due to the Covid-19 pandemic.

To bring some much-needed “atmosphere” to stadiums, DS Smith has developed its “Return to Sport” range of fully recyclable cardboard crowds for clubs.

Each bespoke “fan” is made from recycled materials and is designed to easily slip over existing seating.

DS Smith sales, marketing, and innovation director James Lomax said: “DS Smith likes to see itself as a box-to-box midfielder and we’re ready to spring into action as the Premier League and Championship both get back underway.

“Sport is an integral part of many people’s lives and by using a versatile material like cardboard, we can support clubs across the country to create a unique atmosphere while fans stay home to support social distancing.

“Our ‘Back to Sport’ range is the ideal sustainable solution providing clubs with a blank canvas that can be fully customised, while also ensuring the material can be reused or recycled.”

From cardboard fans to a ‘video fan wall’: How football clubs are looking to create an atmosphere in stadiums

The “Return to Sport” range is scalable from a lone fan to a full house of up 100,000 fans, and can be delivered to clubs and installed within a matter of days.

It’s not the first time that cut-outs of fans have used to add a bit of “atmosphere” to football stadiums during the Covid-19 pandemic.

Towards the end of March, German Bundesliga giant Borussia Monchengladbach announced plans to fill its stadium with a cardboard crowd.

Part of its “Stay at home. Be in the stands” campaign, the club offered its fans the chance to have themselves installed in the stadium in cardboard form.

Speaking at the start of May, when around 4,500 cut-outs had been put in place at Borussia-Park, Monchengladbach forward Marcus Thruman said:  “When you first come into the stadium, for three or four seconds you don’t realise that it’s not real people.

“Sadly, we can’t get the same noise from the crowd, but it’s still a nice feeling to have the fans there.”

Fans paid €19 ($21) to purchase a cut-out, with all the proceeds from the “Stay at home. Be in the stands” campaign given to local charities.

Spanish football’s top-flight La Liga, which returned on 11 June, has been using “virtual” CGI fans stands to populate its stadiums on matchday.

Developed in collaboration with Norwegian company VIZRT, the CGI has been designed to offer a to-scale image of seated fans wearing the home club’s colours.

Premier League football club Tottenham Hotspur is also looking at a technological solution to bring an atmosphere to its stadium, with it set to use a “live video fan wall” during its game against Manchester United.

“Spurs Inside” will be streamed on the venue’s giant video screens, playing live videos of fans cheering the team on intermittently throughout the match.

Spain’s Saica plans to build corrugated manufacturing facility in US