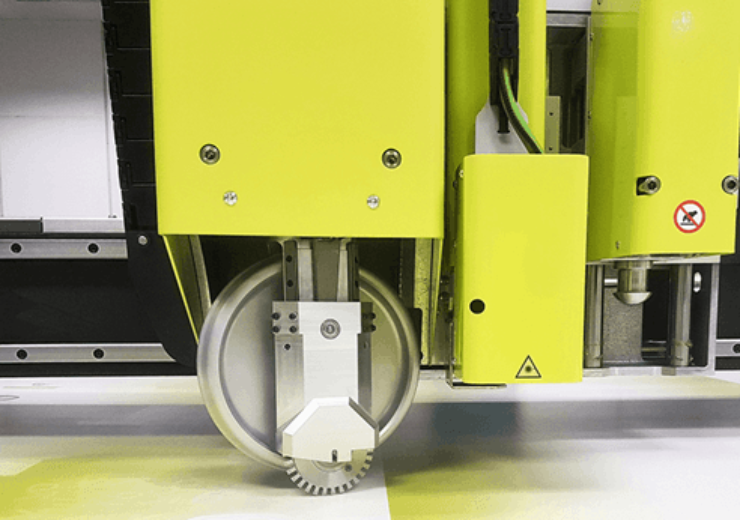 Esko has introduced latest Kongsberg digital cutting and creasing innovation, the Dual Heavy Duty Unit, designed to increase productivity by up to 50% in corrugated finishing.

Capable of automatically switching and using the right tool throughout the job, the new machine is claimed to deliver better crease quality, even on materials with high-recycled material content.

Esko said in a statement: “Thanks to the uniquely engineered design of a Kongsberg table, it is possible to exercise an unrivalled 50kg of downforce on corrugated materials from single to triple wall, without compromising speed or quality.”

The new Dual Heavy Duty Unit, when combined with the Esko CorruSpeed Tool, allows converters to cut and perforate corrugated substrates with die-cut like quality at full machine speeds of up to 100m/min

Designed specifically for high-speed digital finishing of corrugated board, the CorruSpeed Tool uses a static knife in combination with a patented knife foot design, simulating the effects of ejection rubbers in conventional die tooling.

Esko product manager Russell Weller said: “The new Dual Heavy Duty Unit is perfect for corrugated point of sale and packaging jobs, allowing our customers to run without changing tools, delivering productivity boosts of up to 50%.

“It enables faster machine setup and higher quality digital cutting and creasing of corrugated board – targeted at sample making and short-run production of corrugated containers, displays and signage – so most importantly speed and quality does not suffer.

“Both positions still pack a 50kg downforce and run through material at full machine speeds. When converters add the CorruSpeed tool into the mix, corrugated board can be cut at 100m/min with die-cut like quality that is not achievable anywhere else.”

Esko said that the Dual Heavy Duty Unit and the Corruspeed tool can be retrofitted on all existing Kongsberg C, Kongsberg C Edge and Kongsberg XP tables running iPC.