Together with the retailer Lidl Switzerland, Empa researchers have now developed a protective cover for fruit and vegetables based on renewable raw materials 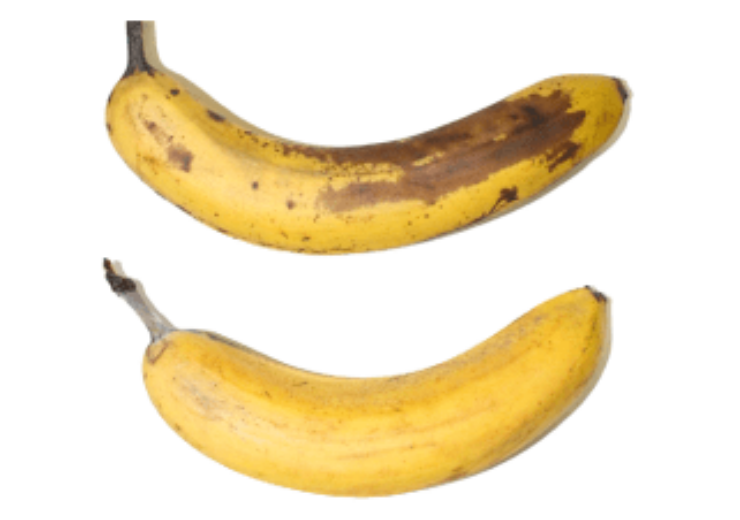 The lower of these 10-day-old bananas is protected by a cellulose coating. Image: Manifesto Films, Lidl Schweiz.

Empa and Lidl Switzerland have jointly developed a cellulose protective coating for fruit and vegetables. The novel coating is made from so-called pomace – squeezed fruit and vegetable peels. The innovative project can reduce packaging and prevent food waste.

Plastic packaging in grocery stores protects fruits and vegetables from spoilage, but also creates significant amounts of waste. Together with the retailer Lidl Switzerland, Empa researchers have now developed a protective cover for fruit and vegetables based on renewable raw materials. For this project, Lidl chose Empa as a partner because Empa had decades of research experience with cellulose products.

In Empa’s Cellulose & Wood Materials laboratory, the researchers then spent more than a year developing a special protective cellulose coating that can be applied to fruits and vegetables. The result: Coated fruits and vegetables stay fresh significantly longer. In tests, the shelf life of, for instance, bananas was extended by more than a week. This significantly reduces food waste. “The big goal is that such bio-coatings will be able to replace a lot of petroleum-based packaging in the future,” says Gustav Nyström, head of the Empa lab.

The idea is to process so-called pomace into fibrillated cellulose. Pomace is the solid residue left over after extracting the juice from fruit, vegetables or plants. Previously, this plant leftover was disposed of in biogas plants or directly on the field; in the future, it will be used to create a protective coating for fresh fruit. The coating is either sprayed onto the fruit or applied to the produce as a dip and is easy to wash off. As it is harmless to the consumer, it can also be consumed without harm. The potential of cellulose coatings is by no means exploited yet; there is the possibility of adding additives such as vitamins or antioxidants.

In summer, the highly promising preliminary study, which has been ongoing since 2019, was successfully completed and the main study launched. The cellulose layer developed at Empa will be tested and further improved over the next two years together with Lidl Switzerland and a fruit and vegetable supplier. The project is supported by Innosuisse, the Swiss innovation agency. The aim is for the new technology to be used in all 150 Lidl stores throughout Switzerland following the successful main trial.