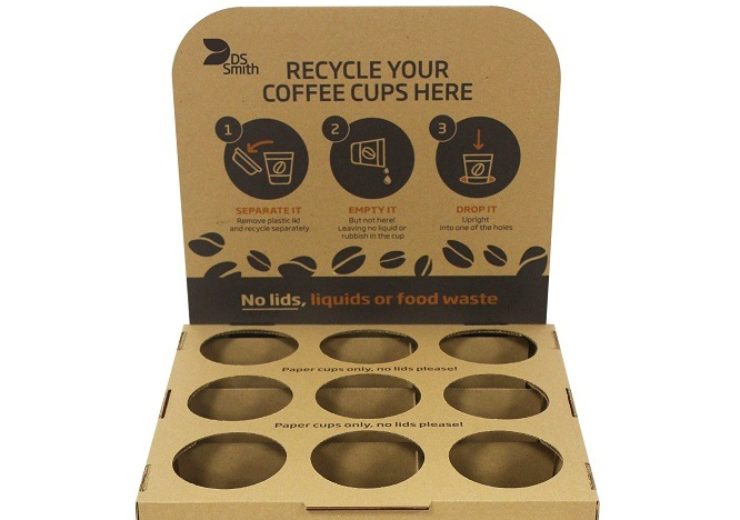 DS Smith says the move will offer the UK's 2.7 million businesses the chance to recycle used cups at its recycling plant in Kent (Credit: DS Smith)

Cardboard packaging company DS Smith has announced a partnership with Royal Mail to set up a “Coffee Cup Drop Box” in an effort to improve the item’s recycling.

The firm has developed a box, made from recycled paper, which can be used to collect coffee cups from across the UK and is targeted at the 2.7 million businesses operating in the country.

Each box can hold about 700 cups and once filled is then collected by Royal Mail and returned to DS Smith’s recycled paper mill, where it’s then turned into new packaging products.

Currently in the UK, up to 7.8 million cups end up in landfill or incinerators every day, with 58% of Brits disposing of their coffee cups at work.

“With this figure only increasing, we need to ensure these cups reach us separate from other waste.

“Through our Coffee Cup Drop Box we can provide the much-needed national infrastructure to reduce the 7.8 million coffee cups that are currently falling through the gap on commutes, in offices and across the UK.”

Research commissioned by DS Smith and carried out by market research and data analytics firm YouGov found 54% of British adults believe their recycled coffee cups are turned into new products.

However, the study also found nearly 20% think that even when recycled, these cups end up either incinerated or in landfill.

More than 40% of people in the UK who own a reusable coffee cup admitted to rarely using it, says DS Smith

The use of reusable coffee cups in the UK has grown over the past few years, with retailer Argos announcing that in December 2017, portable cup purchases jumped by 587% compared to the same month the previous year.

Kitchenware chain Lakeland also reported an increase in reusable cup sales, going up by more than 100% month-on-month, with retail giant John Lewis saying that during the week before Christmas 2017, it had sold more travel cups than in any other week of the year.

Two of the biggest coffee companies in the UK, Costa and Starbucks, also sell reusable coffee cups at their stores, with a discount offered over drinks purchased in a single-use alternatives.

Despite this, DS Smith found of the 46% of Brits currently using a reusable coffee cup, only 12% say they use it all the time when purchasing a hot drink and 41% admitted to rarely or never using it.

Alongside this, the number of disposable cups used each year in the UK is estimated to have risen by 20% from 2.5 billion in 2016 to 3 billion.

DS Smith currently operates a recycled paper mill in the UK county of Kent, which is capable of recycling up to 2.5 billion coffee cups every year, the largest of its kind in the UK.

The “Coffee Cup Drop Box” will allow the small and medium sized businesses using the scheme to access the recycling mill.