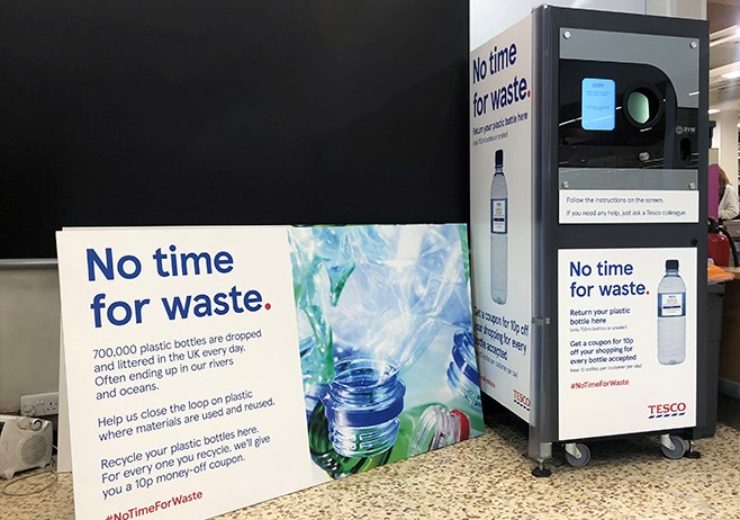 Tesco were one of a handful of UK supermarkets to trial a deposit return scheme (Credit: Tesco)

Mr Gove, in what could be his last speech as minister for the Department for the Environment, Food and Rural Affairs (Defra), also announced support for extended producer responsibility (EPR) for plastic packaging-makers at London’s Kew Gardens today.

It comes after a consultation by Defra into both schemes concluded in May, with the results likely to be released later this year.

Commenting on the EPR, he added: “At the moment, producers currently pay only 10% of the cost. We will make them responsible for 100%.

“These reforms will raise up to £1bn, which can then be used to support improved recycling.”

Time is running out to make a difference, says Michael Gove

Alongside the  backing for an all-in DRS and EPR, Mr Gove also emphasised the importance of taking immediate action on climate change and urged the incoming Conservative prime minister to make the upcoming Environment Bill a flagship measure for the next Queen’s speech.

He said: “There is a political need to act – because we cannot leave this planet to the next generation more polluted, more dangerous, denuded of its natural riches and increasingly inhospitable to all life.

“There is an economic need to act – because unless we restore our natural capital then we will have depleted soils incapable of yielding harvests or sustaining livestock.

“We will have oceans with more plastic than fish, we will have dried up or contaminated water sources and we will have severe weather events endangering lives and livelihoods.

“And there is a moral need to act – because, as Margaret Thatcher reminded us, we do not have a freehold on this planet, it is not ours to dispose of as we wish.

“Time is running out to make the difference we need, to repair the damage we as a species have done to the planet we have plundered.”

Sam Chetan-Welsh, political adviser for Greenpeace UK, believes the general public and the planet will reap the benefits of DRS.

He said: “We’re pleased that, despite heavy lobbying from supermarkets and the soft drinks industry, Michael Gove hasn’t lost his bottle on backing an all-inclusive scheme for drinks bottles and cans.

“This public commitment to an all-in scheme is a vital step forward and we now urge the government to finish the job and make this into law.

“These plans will also force big business to finally foot the bill for the masses of plastic rubbish it creates – which currently is almost entirely paid for by you and me.

“Mr Gove has stood his ground, and the winners will be taxpayers and our planet.

“By backing an all-inclusive deposit return for bottles and cans, and pledging to force big business to finally foot the bill for masses of plastic rubbish they create, Gove’s pledges give the next government a good place to start.”

He added: “The government must speed up the ban on petrol and diesel vehicles, triple renewable power over the next decade, end fracking and Heathrow’s third runway, and boost investment in insulating our homes.

“The next government must do better on climate and nature, and do it quickly.”

He said: “Forward-thinking businesses increasingly understand if they aren’t part of a circular system that manages waste then consumers will hold them accountable for their growing environmental impacts.

“But in order to bring plastic packaging into that system and ensure as much material as possible is recycled, we need a simple, universal and inclusive scheme that helps people put a value on plastic and encourages them to stop littering and start recycling.

“By announcing his intent to establish just such a scheme, the secretary of state has today promised a significant step forward.”