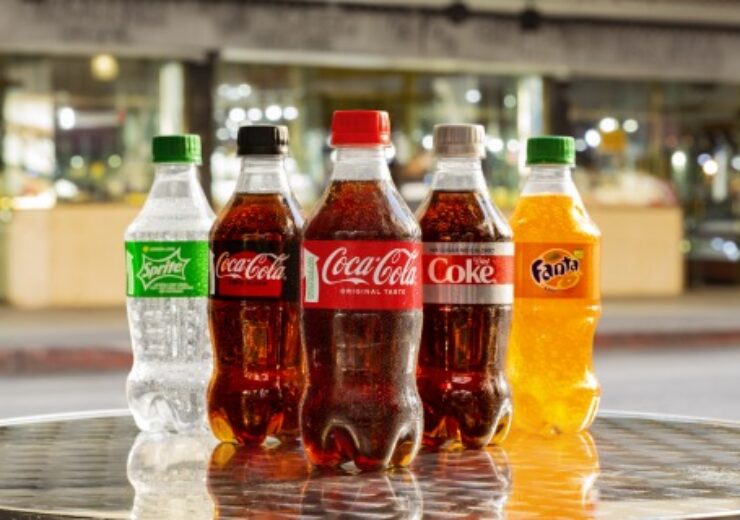 All-new 13.2oz bottles made from 100% recycled plastic material (does not include the bottle's cap and label) (Credit: Business Wire)

Multinational beverage company Coca-Cola has launched a new 13.2oz bottle made from 100% recycled plastic material (rPET) in the US.

The company is initially offering its Coca-Cola beverage brand products in the new sustainable rPET bottle.

This year, the firm will also offer other brands such as DASANI and smartwater in the new bottle made from recycled plastic material.

Coca-Cola stated that the initiatives are a significant step in addressing plastic waste and reducing the firm’s use of new plastic by over 20% across the portfolio in North America compared to 2018.

From this month, the company offers its Coca-Cola Trademark products such as the Coke, Diet Coke, Coke Zero Sugar and Coca-Cola Flavours in a sustainable bottle in select states in the Northeast, Florida and California.

Designed to reduce the use of new plastic, the new recyclable package is conveniently sized in a sippable package.

The company will also launch additional sparkling beverage brands in the 13.2oz rPET bottle in this summer.

Starting this month, the 20oz bottles made from 100% rPET are being launched across Coca-Cola, Coke Zero Sugar, Diet Coke and Coca-Cola Flavours in California and New York, as well as in Texas is spring as part of a portfolio approach.

The DASANI and smartwater brands will also be launched in sustainable 20oz bottles in March and July, respectively.

In addition, the Sprite is now available in new 13.2oz clear bottle in select markets. All Sprite packaging will be converted to clear packaging by the end of 2022.

Coca-Cola North America operating unit sustainability general manager and vice president Alpa Sutaria said: “Given our scale and resources, we realize our unique opportunity and clear responsibility to make a positive difference in the global plastic crisis, bringing us closer to our ambitious World Without Waste goals.

“Plastic is a valuable packaging resource and these innovations in the U.S. represent meaningful action that focus not just on what goes into the bottles, but on innovation of the bottles themselves.”

In September last year, Coca-Cola European Partners announced that it intends to transition from the use of virgin oil-based plastic in PET bottles to 100% rPET bottles in the Netherlands and Norway.