The award means development of the bioplastic made from fish waste — created by University of Sussex graduate Lucy Hughes — will be boosted by £30,000 in additional funding 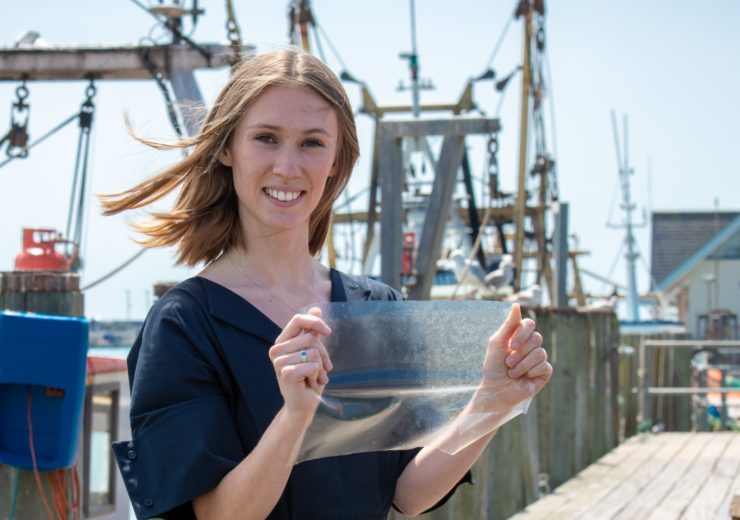 A bioplastic made from organic fish waste destined for landfill or incineration has won this year’s international James Dyson Award.

MarinaTex, developed by University of Sussex graduate Lucy Hughes, is designed for applications in single-use packaging and can biodegrade within four to six weeks.

It’s estimated the UK uses around five million tonnes of plastic every year — nearly half of which is for packaging — while the country produces 492,020 tonnes of fish waste annually.

Hughes said: “Plastic is an amazing material, but we’re too reliant on it as designers and engineers.

“It makes no sense to me that we’re using plastic, an incredibly durable material, for products that have a life cycle of less than a day.

“For me, MarinaTex represents a real commitment to innovating plastic use and incorporating sustainable, local and circular values into product design.

“As engineers, we shouldn’t limit ourselves to designing to form and function, but rather form, function and footprint.”

One Atlantic cod could generate enough waste to make 1,400 bags of MarinaTex

Through extensive research into the potential of using fish waste to create bioplastic, Hughes found the fish skins and scales were the most promising sources for the product, due to their flexibility and strength-enabling proteins.

To create the new material, she had to find an organic binder, experimenting with marine substances found along the UK’s Sussex coastline, settling on agar — which is found in red algae.

To refine the material and its development process, Hughes conducted more than 100 experiments, mostly conducted on a kitchen stove at her student accommodation.

The product could also prove to be resource-efficient, with Hughes claiming one Atlantic cod could generate organic waste required to make 1,400 bags of MarinaTex.

“Ultimately, we decided to pick the idea the world could least do without.

As the international winner, Hughes will receive £30,000, using this money to commercialise her invention.

She will also use her funding for further research into how MarinaTex can become a global answer to the abundance of plastic waste while still harnessing local solutions.

On winning the award, Hughes said: “I’m so delighted that MarinaTex has been recognised by the James Dyson Award.

“The invention is still in its infancy and I never thought it would make it to this stage, so it’s really encouraging to have the potential of the material acknowledged by such a prestigious award.

“I’m excited to now have the chance to undertake further research and development to explore all of the possible uses of MarinaTex, taking into account form, function and footprint.”