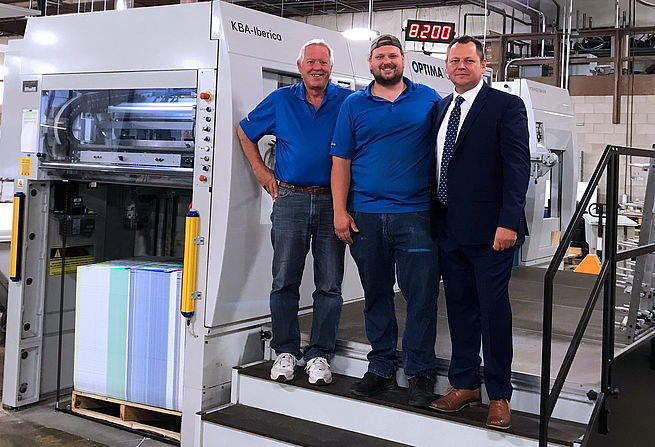 Image: Officials from KBA among others. Photo: courtesy of Koenig & Bauer AG.

Ever since Battlefield Press was founded in 1964, this family-owned full-service modern print shop located in Burlington, Ontario, Canada has striven to be the best. Now in its third generation, Battlefield has separated itself from its North American competitors by applying its superior trade of craftsmanship with particular know-how especially using UV techniques. Central to its success, Battlefield’s management team has had to make hard decisions to better offer its customers top quality, fast turnaround, and competitive pricing. This incisive decision-making process was on full display when the firm had to replace a sub-par die cutter from a different manufacturer with a new KBA-Iberica Optima 106 die cutter earlier this year.

“Since we serve very high-end customers, it was very important to us to buy the best-made die cutter,” says Jerry Theoret, president of Battlefield. “For us, that meant it had to be European built. Due to our prior bad experience, we would not consider anything made in China, so that eliminated a lot of machines.”

Instead, Battlefield turned its discerning eye to KBA-Iberica’s brand of die-cutters. The firm learned that the Optima 106 machine is capable of handling production of paper, cardboard, plastic and corrugated boards up to 1.5mm, providing much needed flexibility to the firm’s varied jobs. It could also offer top running speeds for faster productivity and efficiency. Wanting to see where the die-cutters are manufactured, Battlefield’s management team traveled to the factory in Barcelona, Spain to see how the machines are built.

“After our visit, we left the meeting very impressed,” says Theoret. “So much so that we signed an order three days later for a KBA-Iberica Optima 106 die cutter. We felt the sales team was very professional, knowledgeable, and responsive. From the moment we met them, they answered all of our questions immediately and were alert to our needs throughout the entire process.”

In early May 2018, the 45,000 sq ft one-story facility outside of Toronto took possession of the new die-cutter. The installation, says Theoret, was performed very well and went smoothly. The KBA-Iberica training team came to Battlefield’s facility to teach the operators how to use the new die cutter. The Battlefield operators were so impressed and learned so much from them that they hope they will be able to visit again for some future training.

“Although we’ve only had the die-cutter up and running jobs for less than a month, the early reviews from our team are that the machine is providing faster makereadies, runs much faster than our previous machines, and the sheets are much easier to strip,” says Theoret. “We’re thrilled with its operator friendly innovations and ease of handling. It’s been an important addition to our post-press department allowing us to keep all of our jobs inhouse and permitting us to die-cut from 29.5-inch up to 41.5-inch press sheets. Plus, it has performed magnificently for our customer’s demanding work.”

Theoret adds that his company is looking forward to utilizing some of the special features on the KBA-Iberica machine, particularly, its unique grip edge removal and its die cutting of clear plastic substrates. Battlefield’s new Optima 106 is equipped with a grip edge removal system with pneumatic clamps that fixes the wooden templates for perfect and secure positioning and make-ready reduction time. With this unique system only found on KBA-Iberica models, effective removal of grip edge trim is achieved on each job.

“A big part of our business is to produce very high quality work on diverse substrates, including clear plastic,” says Theoret. “We’re pleased that the Optima 106 features an anti-static kit for feeder head and table providing us with improved performance when die-cutting plastic materials. We didn’t have these features or operation on our previous die cutters.”

As the 60-employee business looks to the future, it is well-positioned for increased growth and revenue. With the installment of the new KBA-Iberica die-cutter and other important equipment purchases, Theoret believes that the company can grow by 15-20% per year, with a goal of posting a 50% increase in revenue in the next three years. “The Optima 106 was the perfect investment for our company, providing us with high productivity and a rugged long-life piece of machinery,” says Theoret.

Battlefield Press was founded in 1964 and was one of the first in Ontario to offer four-color printing. In the 1990s, the firm led by incorporating digital printing and workflow technology. It was also the only printer in Canada to offer 12-colour perfector printing in 2005. In 2016, it was the first Canadian printer to win Sappi’s Printer of the Year Award. It has built its fine reputation by producing automotive, pharmaceutical, in-store POP, direct mail and product package printing. Battlefield prints catalogs, books, maps, decals, boxes, banners, signs and more using specialty coatings from matte and gloss UV (usually in a single pass) to clear foil deboss and it prints on everything from 40lb text to 40pt vinyl right off the roll.