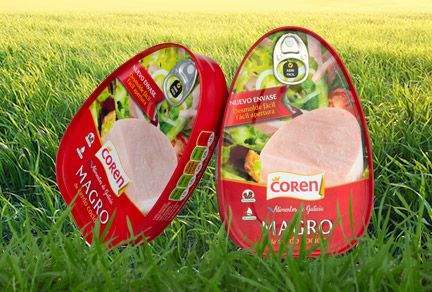 The can provided to the Coren features an advanced shape with wider at the top of the can or otherwise called as shoulder.

The triangular shaped aluminium can is also provided with a special easy release lacquer, which makes the content simpler and quicker to serve in one piece.

The new single serve can is produced at Ardagh’s production facility in Schweighouse of France.

Ardagh has provided slightly conical angle to the cam for facilitating easy stacking, while striking red decoration provides better shelf appeal and is applied at the firm’s specialist printing facility in Cuxhaven, Germany.

Coren, which is said to be the largest agri-food co-op in Spain, supplies fresh poultry, pork and beef, processed meats, cured meats and ready-meals.

In October this year, Ardagh unveiled new William Grant whisky bottle, which has been redesigned for the worldwide relaunch of its whisky range.

During the same month, Ardagh has provided its nitro cans for Kahlúa Espresso Martini drink.

Launched in late 2016, the nitro can is the RTD packaging solution developed by Ardagh for nitro beverages.

The firm produces metal packaging for all market sectors, including beverage, food, pet food and seafood.

Manna Capital, Ball partner for aluminium sheet mill and recycling centre in US