Brand partnerships with Comic Relief have become one of the key pillars in raising money for the charity on Red Nose Day - with a wide range of interesting wrapper, bottle and jar designs 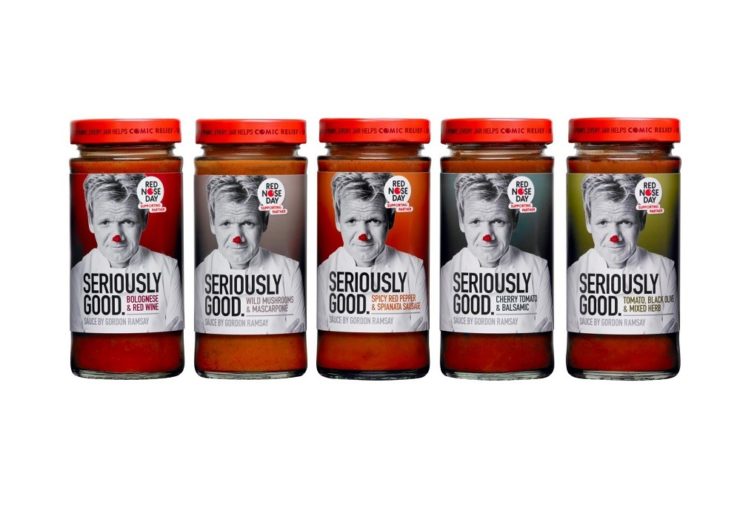 Fundraising activities will take place across the UK tomorrow for Red Nose Day – but it’s not just schools and community events that raise money for Comic Relief, but brand partners too.

These partnerships, including Walkers, Kellogg’s and Mars, have contributed to the charity raising more than £1bn in its 34-year history.

Campaigns have included specially-branded packets of crisps to giving consumers the opportunity to speak to an iconic character of British advertising history.

Consumer goods brand Unilever entered the campaigning foray for the charity back in 2015, with two of its most well-known brands, PG Tips and Persil, donning the iconic red nose.

With this pairing, the public would be able to get in touch with the famous PG Tips Monkey via the @MostFamousMonkey Facebook Messenger account, receiving jokes and also being able to donate to Comic Relief.

Given that it would make a worthy substitute for a red nose, it’s perhaps no surprise Mini Babybel wrappers have adorned the Comic Relief logo.

Parent company Babybel has been a partner with the charity for both its Red Nose Day and Sport Relief events since 1999.

It has raised more than £1m with a varied array of campaigns during this time.

The cheese snack brand ran a campaign in 2015 called “Become a laughing Babybel”, which allowed customers to create their very own personalised wrapper.

In the same year, it worked alongside The Only Way Is Essex star Joey Essex, live streaming him onto a digital billboard at Westfield London with the aim of making unsuspecting shoppers laugh.

For the 2019 edition of Comic Relief, Mini Babybel has started a #BabybelDares campaign, challenging consumers to upload videos of themselves carrying out dares that are instructed on special edition wrappers, such as “roar like a dinosaur” or “walk like a crab”.

Mars, Incorporated has worked alongside Red Nose Day for eight years, with the partnership starting with great success.

Its chocolate brand Maltesers helped to raise £1.2m after donating 2p from every sale of the specially-designed packets.

In that same year, UK subsidiary Mars Associates raised a further £47,300 at the company’s headquarters in Slough.

In both 2015 and 2017, Maltesers conducted two cake-making campaigns called “Bake Yourself Silly” and “You Bake, We Donate £1 million”.

The firm succeeded in meeting its target figure of £1m on both occasions.

The campaigns were designed so that, for every photograph a customer uploaded to social media of them with a cake they’d baked alongside the hashtags #bakeyourselvessilly or #bakeamillion, the confectionery giant donated £5.

To help to raise awareness for the first-ever Red Nose Day launched in the US in 2015, another of Mars’ brands M&M’S did a social media campaign called #MakeMLaugh.

Consumers were encouraged to make someone laugh and post evidence on social media.

Every single time a photograph with this hashtag was posted, the company would give a dollar to Red Nose Day, with M&M’S making a combined total of $1.25m (£959,000) for the charity.

Seriously Good Sauces was a brand created specifically for Comic Relief by world-famous chef Gordon Ramsay and was sold from 2009 to 2011.

When every £1.89 jar was sold, 10p was donated to the charity, with the added bonus of it being available all-year round.

The range of sauces included bolognese and red wine, spicy red pepper and spianata sausage, and wild mushrooms and mascarpone.

On its launch, Mr Ramsay said: “I’ve seen first-hand the difference money raised through Comic Relief can make, which inspired me to get involved.”

At the start of 2011, the Scottish chef, alongside Coronation Street actress Shobna Gulati, set up a pop-up curry stall in Brick Lane, London, to help raise awareness for the product.

When the charity announced the discontinuation of the product, the sauces had raised close to £500,000.

The iconic Walkers crisps brand has worked alongside Comic Relief on numerous occasions, with heavy involvement from celebrities as part of its marketing campaigns.

In 2007, it gave away free novelty red ears as part of a bid to raise £1m for the charity.

A advert for the campaign featured the likes of Stephen Fry, Billie Piper and Walkers’ brand ambassador Gary Lineker.

In 2011, the firm partnered with four comedians in another bid raise £1m.

The premise of the idea was that the comics would each have their own personally-branded packet of crisps with a unique flavour.

Of every packet sold, 5p went to the charity, with the campaign making more than £1m for Comic Relief 2011.

This will be the first year that pizza brand Chicago Town will be one of the Red Nose Day partners, making a social media push to raise the money.

Firstly, its German-owned parent company Dr Oetker has agreed to donate £300,000 directly, alongside a fundraising campaign called “Party In Your PJ’s”.

Every time someone posts a picture of themselves partying in their pyjamas with the #myRNDparty hashtag, it will donate £1.

Comic Relief fundraising and partnerships executive director Catherine Cottrell said: “We’re extremely grateful for Chicago Town’s generous donation to the charity and thrilled to have its support, inviting people to come together for this year’s Red Nose Day.”

As part of a promotion for the campaign, the company enlisted the help of celebrity lookalikes of Gordon Ramsay, Vogue editor Anna Wintour and Victoria Beckham to pose for pictures in pyjamas.

Breakfast cereal giant Kellogg’s teamed up with Comic Relief in 2011 and created a special version of its Rice Krispies Squares bars.

The American company released a limited edition version of the bars, which featured red dot colourings to make it look like they were covered with red roses.

To help promote it, Kellogg’s integrated it into its million-pound advertisement campaign, taking an interactive Rice Krispies Squares vending machine to some university campuses in Britain.

Students were able to have their picture taken at the dispenser, which morphed their photos into a smiley face – and in doing this, a Rice Krispies Squares would be dispensed.

Mike Taylor, then-Kellogg’s sales director, said at the time: “We’re proud to be able to do something for Comic Relief.

“This promotion allows our shoppers to support this great cause by simply buying the food they love.”