From recycling to no single-use plastics: How Glastonbury’s going green

From a stage made from recycled plastic to a festival-wide ban on single-use plastic bottles, NS Packaging takes a look at Glastonbury's recycling and reuse policies 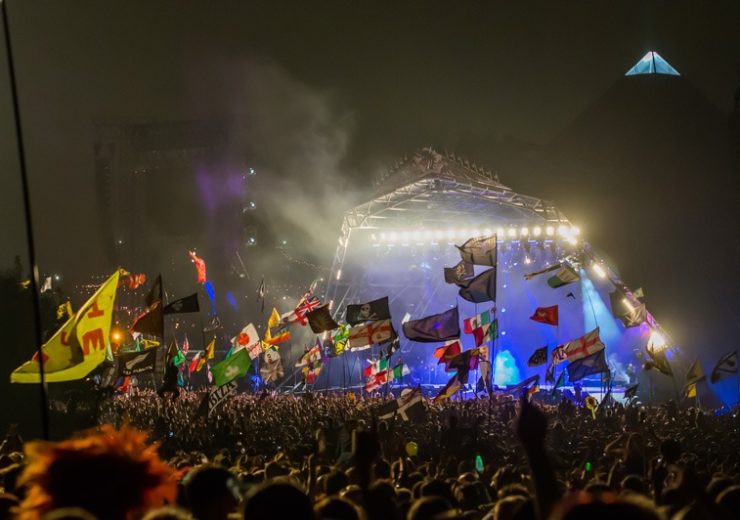 Glastonbury is back after its traditional one year hiatus to let the ground regrow (Credit: Glastonbury)

After a one-year hiatus, the iconic Glastonbury Festival is back – and with it being granted an expanded attendance of more than 200,000, the amount of waste that needs recycling will be larger than ever.

According to estimates in The Show Must Go On report produced by festival industry think-tank Powerful Thinking in 2015, roughly 23,500 tonnes of waste is produced annually at UK festivals, with only about a third ending up recycled.

Large event organisers are making moves to reduce the effect they have on the environment, with the Association of Independent Festivals (AIF) setting up the Drastic on Plastic campaign.

This has seen them pledge to rid their sites of single-use plastic by 2021, ridding events of plastic straws, cable ties, toiletry bottles, food trays and drinks bottles.

With the likes of George Ezra, The Cure and Stormzy preparing to take to the famous Pyramid Stage in Somerset this weekend, NS Packaging takes a look at some of the work being done to keep the surrounding areas as waste-free as possible.

Since 1994, WaterAid, alongside Greenpeace and Oxfam, has been one of the official charity partners of Glastonbury Festival and has run its refill water kiosks at the event since 2014.

For the 2019 festival, the charity has tripled the number of water kiosks to 37, allowing attendees to refill their bottles.

The stands also feature Glastonbury-branded water bottles, which can be paid for in advance and picked up, with a limited number available for sale.

Alongside this, WaterAid has also teamed up with famous artists to design exclusive badges for the music festival.

Designed to highlight the importance of clean water for people across the world, the badges will be free to visitors of all the charity’s kiosks.

The Cure, who will be Sunday’s headline act and one of the designers of a badge, said: “Without water, there wouldn’t be life.

“Everyone should have this basic human right, but millions have their access denied because of who they are or where they live.

“So if you’re going to Glastonbury Festival this summer, head down to the WaterAid water kiosks to refill your bottles while also helping make a noise about this injustice and supporting the charity’s work to change lives for good.”

The 36th edition of Glastonbury Festival will be the first time it has implemented a ban on single-use plastic bottles.

Alongside the refill areas, soft drinks and Life Water, which was previously sold in single-use plastic bottles, will now be sold in aluminium cans that can be disposed at the festival’s on-site recycling centre.

While there is a ban on the sale of plastic bottles, festival-goers will still be able to bring plastic bottles on site, although Glastonbury organisers are strongly encouraging attendees to join the effort by bringing as little single-use plastic as possible.

Emily Eavis, the event’s co-organiser and the youngest daughter of founder Michael Eavis, said: “It’s paramount for our planet that we all reduce our plastic consumption, and I’m thrilled that, together, we’ll be able to prevent over a million single-use plastic bottles from being used at this year’s festival.

“I really hope that everyone – from ticket-holder to headliner – will leave Worthy Farm this year knowing that even small, everyday changes can make a real difference.”

When purchasing a ticket to Glastonbury, attendees have been required to sign up to the festival’s “Love the Farm, Leave no Trace” pledge.

The commitments made include only using the toilets provided, using the recycling bins correctly, not dropping litter on the ground, bagging all rubbish in bin bags provided by the campsite stewards, trying to use a reusable water bottle and avoiding single-use packaging.

Across the site, there are 100 recycling pens provided, which festival-goers are asked to use to prevent bins from overflowing.

Alongside this, recycled British stainless steel pint cups can be purchased for £5 at the WaterAid kiosks and used for cold drinks at any of the festival’s smaller draught bars.

Glastonbury stage made from recycled plastic

Environmental charity Keep Britain Tidy announced last month that it has partnered with Shangri-La Glastonbury and the Orca Sound Project to create a stage made from recycled plastic.

Voluntary group #LitterHeroes, based in the South West of England, collected 10 tonnes of plastic – the equivalent of around one million plastic bottles – from beaches, parks and streets across the region.

These were collected and processed by Exeter City Council before the materials were used to build the Shangri-La’s 360-degree audio-visual arena – The Gas Tower.

Keep Britain Tidy CEO Allison Ogden-Newton said: “This ground-breaking project will see tonnes of plastic removed from our environment – where it has such devastating consequences on our wildlife and marine life – and put to good use.

“By working together, we are showing the world that the plastic we no longer want or need can be recycled and turned into something this is both exciting and useful.”

Kaye Dunnings, Shangri-La’s creative director, added: “Team Shangri-Las are thrilled to be a part of this important, pioneering project.

“Through our collaboration with Orca Sound and Keep Britain Tidy we are able to continue our explorations into finding sustainable solutions for our work in the festival and creative industries.”