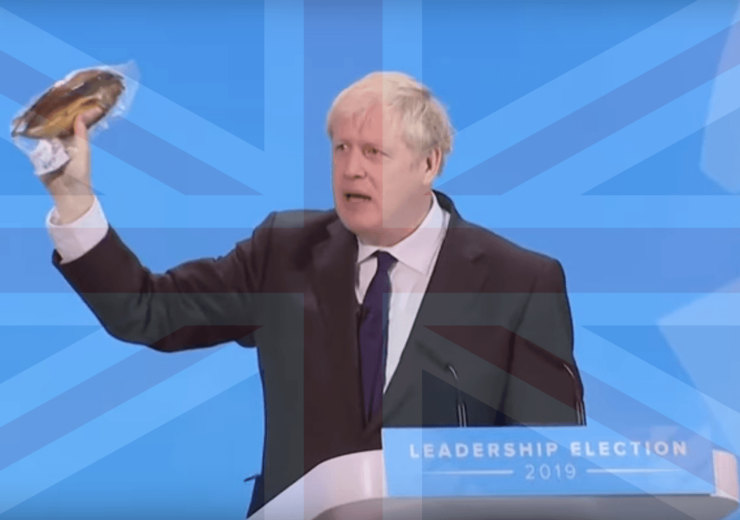 Boris Johnson holding up a kipper with plastic packaging wrapped around it (Credit: YouTube, The Guardian)

Packaging industry and environmental charity leaders have given a mixed reaction to the announcement of Boris Johnson becoming Prime Minister – with fears that his past comments on business and determination to push through Brexit could cause “mortal damage” to the UK.

Johnson was elected leader of his party yesterday (23 July), taking the place of Theresa May, after beating Jeremy Hunt in an internal party contest.

The 55-year-old former Mayor of London was officially appointed to the role today after accepting the position from the Queen.

Johnson comes in to 10 Downing Street with an array of issues to deal with, including Brexit, infrastructure and climate change.

He said: “It’s very difficult to express enthusiasm towards a Prime Minister who could even consider leaving the EU with no agreement.

“Couple this with his stated views of business, the lifeblood of our country, then it’s hard to believe we now have a Conservative Prime Minister who is a confessed non ally of business.”

“Balanced against this is an intention to lower corporation tax. It will be interesting to see if this can be delivered given his huge spending promises.

“Indeed there is no guarantee a reduction in corporation tax will result in the investment needed to bring about the much needed increase in productivity the UK so urgently needs.

“A little love bombing of business would be welcomed.”

Mr Kersh believes Johnson’s proposals on environmental issues will likely ring true with the general public but is interested on whether he keeps Michael Gove as Environment Secretary or opts for a replacement.

“One could imagine his policies on the environment will reflect those of the mass media,” he said.

“Why challenge what is such a safe ground to court popularity?

“If packaging was defined solely by kipper packaging then our new PM clearly considers himself an expert.”

No-deal Brexit would ‘destroy’ any opportunities to progress the food and drinks market, says industry leader

Ian Wright, director general of trade association the Food and Drinks Federation (FDF), said a potential no-deal Brexit would “destroy” any progress that could be made in the industry.

He said: “The UK’s largest manufacturing sector, food and drink, is central to our critical national infrastructure.

“The industry employs more than 450,000 people across the nation. UK food and drink is globally renowned for its quality, provenance and taste.

“The industry’s recently published ‘Plan for Success’ demonstrates how we can make the UK’s £4bn ($4.9bn) food chain the most dynamic, sustainable and competitive in the world.

“It shows how – working in partnership with government – we can boost exports, develop talent and encourage innovation.

“A no-deal Brexit would destroy that opportunity and much more. It will inflict serious and, in some cases mortal, damage to UK food and drink.

“Prices will rise, there will be significant shortages of some products, and disruption for shoppers and consumers will be far reaching.

“We urge the new Prime Minister and government to work with us to deliver a withdrawal agreement that guarantees the closest possible trade and regulatory relationship with our nearest neighbours so UK food and drink can flourish.”

Friends of the Earth chief executive Craig Bennett believes that swift action from the new Boris Johnson administration must be taken to tackle the climate change crisis.

Bennett said: “Boris Johnson said he’d ‘lie down in front of the bulldozers’ to prevent a third runway at Heathrow Airport.

“Now he has the power to cancel this polluting project along with other climate disasters like fracking, and he must.

“The country is united in wanting an urgent response to the climate crisis.

“Swift government action will decide whether we are a nation with warm homes, clean air, and a thriving renewable industry or whether worsening extreme weather, wildfires and floods cause misery for millions.

“Prime Minister Johnson, the choice is yours.”

He added: “Boris Johnson will step into Number 10 as multiple temperature records are being broken in the UK and around the world.

“The challenge of the climate and nature emergencies is staring us all in the face – the question is whether the new Prime Minister is ready to rise to it.

“Will he try to please the dwindling band on the Tory backbenches who aren’t interested in taking much action, or the majority of the British public who want to see faster change and stricter standards to protect our climate, food, air and water?

“Will he be lying in front of the bulldozers, or driving them?”