Inside Waitrose Unpacked: How the supermarket is trying to change the way we shop

The Waitrose Unpacked scheme features food and drink dispensing areas, allowing for consumers to fill up their own containers with the products they want 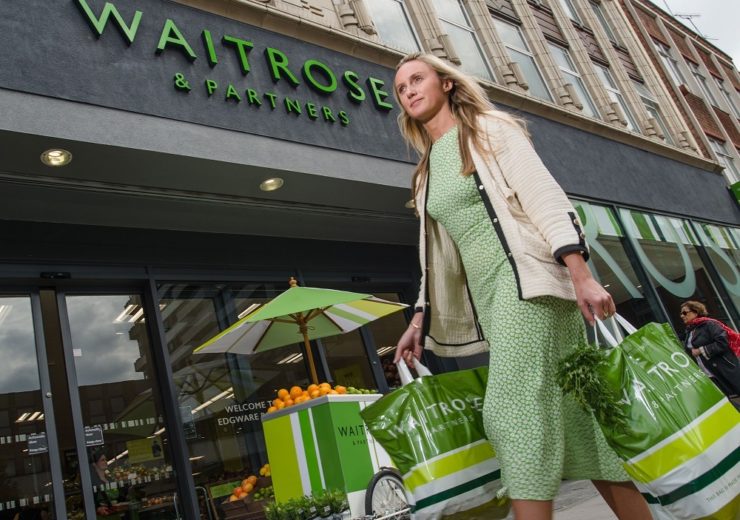 Waitrose has been testing its 'Unpacked' scheme in four of its stores (Credit: John Lewis Partnership)

In 2019, Waitrose caused an international storm of interest when it unveiled its Unpacked scheme. The company’s customer proposition manager Rachel Edmonds spoke at a recent packaging industry about how the scheme came into existence, with Thomas Parker in attendance.

Since being founded as Waite, Rose and Taylor in 1904, Waitrose has been one the tentpoles of the British supermarket sector.

Part of the UK’s largest employee-owned company, the John Lewis Partnership, it currently owns 338 shops across the country, making up 5.1% of the market.

Such a mammoth size means the shifts that Waitrose makes can have a big impact.

First tested in its Oxford Botley Road store and since rolled out to a handful of other outlets, it allows consumers to bring their own containers to purchase food.

The scheme offers consumers a frozen “pick and mix area”, as well as dispensers for 28 other foodstuffs – including pasta, lentils, cereals, dried fruit and seeds.

Speaking at the time, Waitrose & Partners head of corporate social responsibility Tor Harris said: “We are determined to build on the work we’ve already done to reduce packaging – and this test will take our efforts to a whole new level as we help the growing number of customers who want to shop in a more sustainable way.

“This has huge potential to shape how people might shop with us in the future so it will be fascinating to see which concepts our customers have an appetite for.

“We know we’re not perfect and have more to do, but we believe this an innovative way to achieve something different.”

The Blue Planet effect and consumers’ changing attitudes towards packaging

Ever since the broadcasting of documentaries such as Blue Planet II, awareness of climate change issues has risen.

According to an April 2019 study by market researcher GlobalWebIndex, 53% of consumers said they had reduced the amount of disposable plastic they use because of the TV show.

Alongside this, the survey found that 42% of people believe products that use sustainable materials are important when it comes to making day-to-day purchase decisions.

This type of shift in awareness from consumers was seen by Waitrose’s customer proposition manager Rachel Edmonds.

Speaking at the Foodservice Packaging Association’s Environment Seminar in London during January, she said: “Customers began to engage with us on the issue on a very different level than they had done before.

“Whether that was on social media, through customer care comments or letters coming into us, we were seeing a step-change.”

Alongside a more vocal consumer base on sustainability issues, Edmonds says their purchasing habits changed as well.

She said: “More than half of our customers said they were already trying to shop in different ways to avoid packaging.

“A further 26% said they would consider doing so in the future.”

How was Waitrose Unpacked set up?

The evidence that its consumers were changing their habits gave Waitrose the confidence to devise a new shopping format.

It brought together employees from across the business to investigate this area and look into the “consumer pain points” when it came to packaging.

Edmonds said: “We looked at what ‘unnecessary’ means to a customer, and what was really difficult to do within a weekly supermarket shop.

“We then began a number of innovation sessions to look at how to tackle these pain points.”

The team shortlisted several ideas and prepared to put them into practice during an 11-week test at the Botley Road store in Oxford.

Over the course of one night, a team transformed an entire area near the entrance to the store.

It was the Waitrose Unpacked debut and involved new branding being unveiled to greet shoppers, along with so-called “ambassadors” of the scheme as they walked into the supermarket.

Edmonds said: “We needed customers to know we were doing something different, so they could get involved and give feedback to us about they thought.”

Central to the pilot was a “refill station”. Pick ‘n’ mix-style dispensers filled with food like pastas, cereals, lentils, rice and dried fruit lined a wall, where shoppers could use recyclable plastic containers – or bring their own in future visits – to carry products previously packaged in non-recyclable plastic wrappers.

Next up was a wine dispenser, allowing customers to fill up their own bottles.

The company also changed its fresh produce department, making 160 of its fruit and vegetable items loose.

Edmonds found that people loved this area because these foods are “emotive” for its customer base.

She added: “They loved being able to shop and choose the amount they want, and see the produce – it felt like going back to the farmers’ market again.”

When Waitrose Unpacked was first launched, it received a large amount of both social and traditional media coverage.

During its 11-week trial, the scheme received 82,000 mentions on social media via the hashtag #WaitroseUnpacked – with celebrity tweeters ranging from Hugh-Fearnley Whittingstall to Richard Dawkins.

Coverage of the scheme spread as far as Japan – with the story also being a top trending news piece on the BBC News app.

In a survey by Waitrose on the Botley Road pilot, 90% of consumers said they’d shop Unpacked again – with those interviewed saying it made them think about having a sustainable lifestyle.

The scheme has since grown, with it now being tested in three more stores in Cheltenham, Wallingford and Abingdon.

Edmonds said she felt reassured because people appeared to be interested.

She said: “The time was right and we have seen that shift increase.

“It’s becoming such a mainstream thing now and people are expecting change – and they’re expecting the industry to help them change as well.

“We got thousands of feedback cards from customers – they couldn’t wait to tell us what they thought.

“We didn’t think we would get this level of traction, but we touched a nerve.”