What is the plastic producing Pennsylvania crackler plant developed by Shell?

After US President Donald Trump paid a visit to the Pennsylvanian town of Monaca to see plastic plant developed by Shell, we take a look at the site 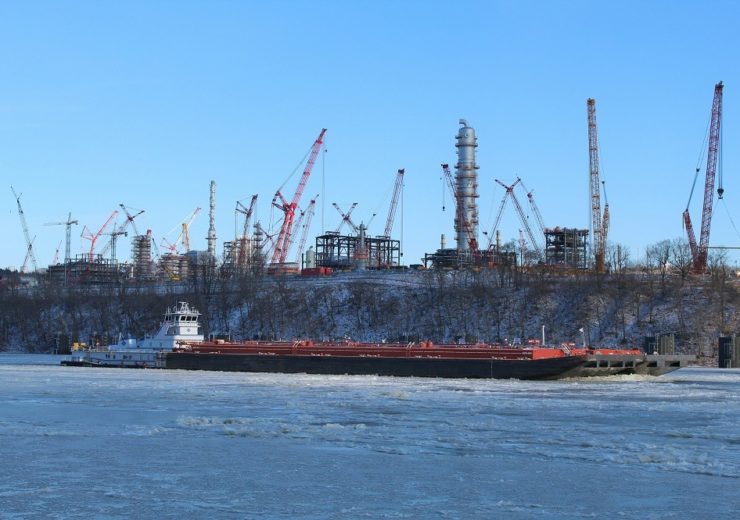 Despite rising international concern about the environmental impact of plastics, the industries involved in their production are still booming worldwide.

And the materials packaging market, a key area of plastic production, is expected to reach a value of $269.6bn by 2025, according to research from Grand View Research in 2018.

However, the plastic production rates of the US are soon to increase, with gas and oil giant Shell to complete its multibillion-dollar chemical plant, which the company estimates will produce more than a million tonnes of plastic pellets each year when up-and-running in the early 2020s.

Following US President Donald Trump’s 13 August visit to the plant, based in the Pennsylvania’s town of Monaca, we take closer look at the ins and outs of the facility.

History of plastic producing crackler plant being set up by Shell

Shell first announced plans for the site in 2012, with construction beginning towards the end of 2017.

As of October 2018, the facility’s largest piece of infrastructure, a quench tower used in plastic production, was under construction.

Speaking at the time of the announcement, the executive vice-president of Shell’s global chemicals business Graham van’t Hoff said: “Eleven months in main construction, I’m delighted with the progress we’re making in Pennsylvania.

When visiting the plant, Trump hailed the facility as a positive, due to its production of plastic in the US.

Speaking about the facility’s exportation of plastic, he said: “That raw material will then be shipped all over the country and all over the world to be fashioned into more products stamped with that very beautiful phrase: ‘Made in the USA’.

How does the facility work?

During Trump’s visit, Hilary Mercer, vice president of Pennsylvania Chemicals and the person in charge of the project, explained how the system works.

“There are furnaces on the left-hand side that were made in Maine.

“Then we crack the ethane to make ethylene, and then we follow it all the way down the platform so we get to the outside, where the big crane is, this being where we make polyethylene in three different reactors.

“So, all different grades of polyethylene make the hard plastics, all the pallets that would go out to customers who are, actually, mostly based in the north east of the US.

“When we finish making the product, it can go out in railcars, so we are on CSX rail here [a freight transportation company], or we can load trucks.

“So we’re the only polyethylene pump, really, in the country, that loads trucks.”

The ethane used at the facility will be fed through a wide range of pipelines that go across miles upon miles of the Appalachia (a cultural region in the east of the US spanning the southern tier of New York to north Alabama and Georgia).

At the site, the ethane is then subjected to a process called crackling, where hydrocarbon molecules found in chemicals are broken up into lighter molecules, by subjecting it to a lot of heat.

When crackled, the molecular bonds turn from ethane to produce ethylene.

Once this is done, the ethylene is then further processed down into a resin, which is turned into plastic pellets – a item that most products using the material are made from.

The facility’s location – built on the Ohio River in Beaver County around 30 miles from Pittsburgh – is based due to both the area’s natural source of ethane, with the company fracking for the subsistence, and because of the customer base.

According to Shell, more than 70% of North American polyethylene customers are within a 700 mile radius of the city of Pittsburgh.

Speaking to the station, Environment Protection Agency administrator Andrew Wheeler said it shouldn’t be a cause for concern.

He said: “”We are closely monitoring both the permit and the emissions and we’re looking at the overall emissions environment of Western Pennsylvania.

“We want to make sure the air quality overall is positive for everyone who lives in Western Pennsylvania.

“These products are being made here instead of China, India or other countries so you save on the carbon footprint of transporting the finished products from halfway around the world.

“So this is actually a win for the American public and it’s producing the products that we use here in our own backyard.”

According CNN, when Trump was asked by a reporter whether there was a need to produce more plastic, he also referred to Asia as the primary source of concern.

He said: “Well, we have tremendous plastics coming over from Asia, from China, and various others.

“It’s not our plastic. It’s plastic that’s floating over in the ocean and the various oceans from other places.

“No, plastics are fine, but you have to know what to do with them. But other countries are not taking care of their plastic use and they haven’t for a long time.

“And the plastic that we’re getting floating across the ocean from other places, including China.”

A spokesperson from Greenpeace USA believes the plant ignores experts’ views that it would be a disaster for employees and the climate.

He said: “Donald Trump is famous for stiffing workers and dodging debts, and his lies about energy are more of the same rubbish.

“Building a giant new fossil fuel plant to make more throwaway plastic packaging ignores both science and economics in a way that is a disaster for workers and for the climate now, and will be even worse for the future.

“But the world’s lousiest showman doesn’t care about any of that, he simply wants attention and money, no matter the cost.

“Trump’s ‘energy dominance’ plan has nothing to do with American workers — it’s a cover to allow his corporate backers to continue their business as usual of profiting off the backs of vulnerable communities.

“The next election is the most important in our lifetime if we want to keep our planet liveable for everyone.

“Donald Trump has made clear once again that he will be catastrophic for the future if he’s re-elected.”