Red Bull burst into the soft drinks market in 1987, creating a new energy drinks segment and bringing with it an innovative 25cl can concept that changed the way the industry and consumers viewed drinks in cans. Now a global brand with plenty of me-too competitors, Red Bull gives us an insight into what's next for energy drinks packaging, and marketing manager Rikke Lerhøj talks us through the new Faxe Kondi Booster launch. 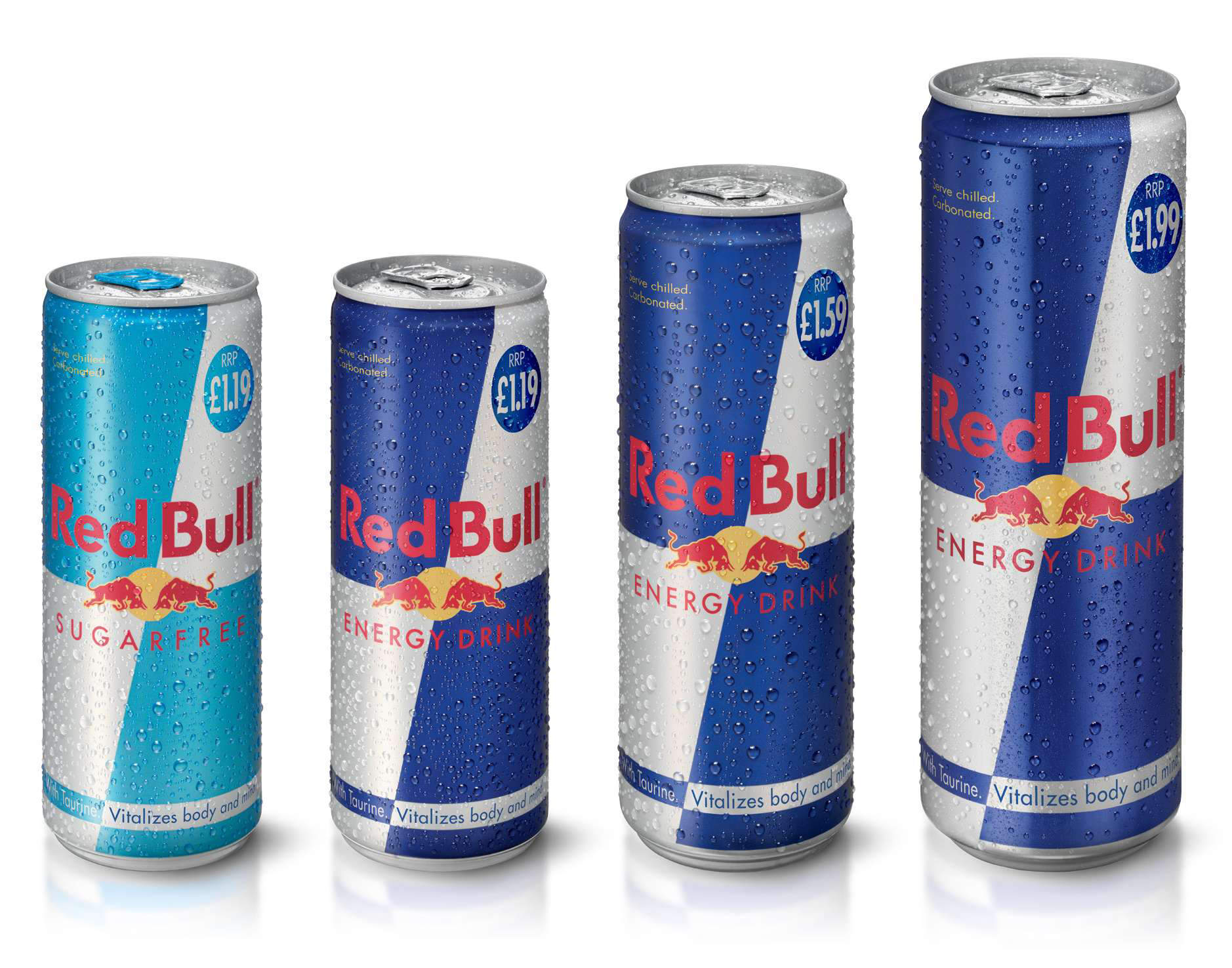 The story goes that 33 years ago, Austrian Dietrich Mateschitz landed in Thailand on a business trip selling toothpaste. Arriving at his hotel, Dietrich grumbled to someone about his jet lag and they recommended local pick-me-up Krating Daeng as a remedy. It must have worked, because Dietrich Mateschitz was so impressed that he tracked down Chaleo Yoovidhya, the creator of his jet lag remedy, and together they developed an energy drink suited to a Western palate. In 1987, Red Bull – what many believe to be one of the most successful soft drinks since Mr Pemberton invented Coca-Cola 100 years or so earlier – was born.

Red Bull offered consumers in the West a new concept, and the idea of a liquid mental stimulant soon caught on outside its Austrian home market. Many consumers’ first experience of Red Bull was as a mixer served with vodka, which helped accelerate its appeal with younger consumers. Red Bull was so popular that it wasn’t long before the me-too products came along – and with them came the emergence of a very valuable soft drink segment in the market. Today, Red Bull is very much a global brand, sold in 167 countries and selling more than 5.6 billion cans in 2014.

Part of Red Bull’s success can be attributed to the company’s distinctive, almost medicinal, small 25cl can. Many reasons can be attributed to the small-can design: firstly, it made the new drink stand out on supermarket shelves, garage forecourts, nightclubs and bars in an intensively competitive marketplace. Secondly, selling 25cl of Red Bull instead of the standard soft drink 33cl measure allowed the company to gain a good price point on an already premium-priced product. Thirdly, the compact design of the can suited Mateschitz’s aspiration to export to new markets around the world.

Although the company has since chosen to open a plant in Brazil, most of the production still takes place in Austria and Switzerland, and the can is suited to exporting demands, keeping the product in good condition without the risk of breakage. The catalyst for the development of the drinks can came from the need to supply Europe-based American GIs with a taste of home after the Second World War.

Red Bull was also available in a 25cl glass bottle in Europe. Many on-premise outlets opted for the glass bottle because they found it easier to pour and meant that consumers could not easily compare prices with off-premise outlets. Despite the modest share for glass, Red Bull has essentially ensured that the 25cl can has become the standard format for the functional energy drink segment. Certainly in the 1990s and the early 2000s, the plethora of new and private-label products mainly opted for this packaging format. There was plenty of evidence of PET, particularly in larger formats, but these were generally aimed at sharing portions and had limited visibility.

Against the grain
Ironically, the domination of canned energy drinks in some markets was so great that the use of PET allowed competitor brands to stand out in their own way. This is best illustrated by Lucozade Energy in the UK. The brand was able to give drinkers a real choice and differentiate itself from other energy drinks by choosing 38cl and 50cl PET bottles. Lucozade registered considerable growth in the UK despite the dramatic emergence of Red Bull. Now owned by Suntory, the PET bottle is a key differentiator for the Lucozade brand and, because it’s sold in a bottle with a cap, it can be closed for drinking later.

Lucozade was the exception, however, and in the early days, very few new brands managed to dent the domination of Red Bull in developed markets such as Western Europe and North America. In Australasia, V Energy gained market leadership, but was soon bought by Danone and is now also owned by Suntory. A few other brands also managed to establish dominance – particularly in markets such as Denmark, where Red Bull was outlawed because of its high caffeine content. These brands soon gave way to Red Bull when regulations changed and it became available.

The bigger can
The dominance of Red Bull in the US was shaken by the arrival of new energy drink Monster in 2002, inspired by Red Bull and six years in the planning. This new energy drink specifically targeted young males, and did not cannibalise the global world leader to a great extent. Monster appealed to the gamer generation, while Red Bull attracted a far broader audience. Once again, it was the use of innovative packaging that allowed Monster to catch the eye in a crowded market. By adopting a bigger 16oz can, Monster offered better value to the price-sensitive consumer group and brand sales exploded and, in little more than a decade, Coca-Cola was buying a piece of the action too.

Monster changed the perception of a 25cl can as the norm for the energy drinks market and ignited a shift in format to bigger cans. Red Bull followed by unveiling a 47.3cl can that quickly attracted a loyal fanbase. Research found that many building site and other manual employees would buy this new size to consume throughout the day.

The larger can also attracted the ‘gamers’ who played games over a sustained time frame. In Europe, Monster sponsored gaming events wherein competitors played all night fuelled by half a litre of liquid enhancement. Monster and earlier products such as Rockstar changed the dynamic of the packaging size mix for energy drink cans. The bigger can has also accelerated the growth of the energy drink category by significantly increasing the average consumer weight of purchase.

From big, back to small
As these new bigger cans began to gain momentum, a new miniature size for energy drinks was brought to the US market – the energy shot. A few pioneers were involved in the development of this segment, with the most prominent being 5-hour Energy, produced by Living Essentials in Indiana. This shot was sold in a 1.93oz or 5.9cl PET bottle and quickly established a considerable fanbase. The big turning point for shots was probably in 2009, when all the main energy drink players had joined the party with their own shots and the market jumped to 40.6 million litres, according to research specialist Canadean. In volume, that does not sound spectacular, but in terms of units sold, it certainly is. Of course, cans were not suited to the shot concept: only PET could allow the format to work.

By 2014, the energy drink shot format had reached over 60 million litres – more than a billion units. However, the shot has not fared as well in Western Europe as it has in the US. The energy capsule idea received plenty of publicity in Western Europe, but in contrast to North America, demand was restricted to less than two million litres at its peak in 2010 and had withered away to less than 200,000L last year. Feedback suggests that European consumers wanted more refreshment with their energy dose, and the approximately 6cl size didn’t deliver enough liquid. Some retailers also complained that the small size meant the shots were often targeted by shoplifters.

Monster changed the perception of a 25cl can as the norm for the energy drinks market and ignited a shift in format to bigger cans.

More shapes and sizes to come
In North America, the energy shot is still going in the right direction and looks likely to maintain its presence. Larger cans have gone from strength to strength around the world, taking market share from the once-dominant 25cl can.

Monster changed the concept of the 25cl can for energy drinks and, as Royal Unibrew has shown by ditching its Faxe Kondi Booster 25cl can, more operators now have the confidence to set their own standards. Monster also has a 20oz can size, plus other odd can sizes for limited-edition flavours.

Red Bull was quick to identify the need to continue to innovate around its packaging, ensuring shelf standout and its appeal to different occasions. Today, Red Bull is sold in big and small cans, bottle cans, PET bottles, shots and glass. This reflects the diverse direction of packaging in tomorrow’s energy drinks market.

What’s in store for energy?
There’s still plenty of slack in the global energy drinks market and we can assume that the market will continue to grow. Red Bull’s flavour range will widen the audience for the global leader, while Coca-Cola’s investment in Monster will allow the brand to enter unchartered channels. Packaging innovators will play an important role in facilitating the growth of the category to help suppliers exploit future opportunities.

The bias towards male energy drink consumers and packaging innovation will play a key role in bringing more women into the category. In countries where the sugar debate rages, innovation will demand smaller pack types to appease the lobbyists. Finally, as Royal Unibrew demonstrates, there is a need to innovate to continue to appeal to the aging Red Bull generation.