How New Zealand is looking to tackle single-use plastic pollution

In 2020, the government in New Zealand published a policy document that outlined how it's looking to tackle the problem of plastic pollution in the country 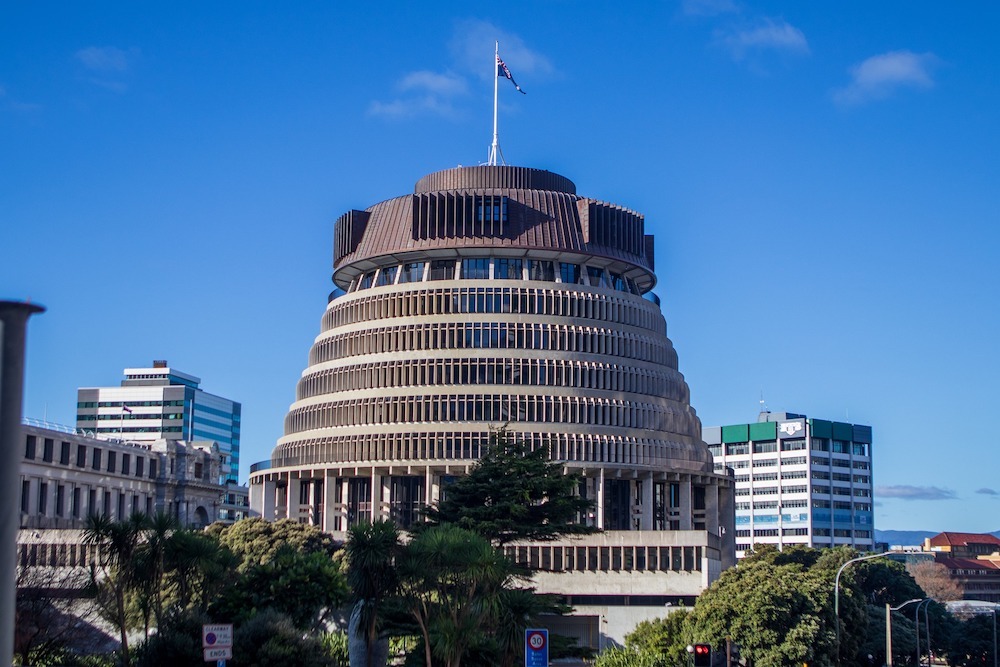 The Beehive is home to New Zealand's parliament (Credit: Pixabay)

New Zealand is home to many famous things, from the iconic All Blacks rugby team to the Lord of the Rings’ Hobbiton set – the nation is, like many others across the world, also home to single-use plastic pollution.

It’s estimated that people in the country discard 15.5 million tonnes of plastic waste each year.

Alongside this, a study published in 2020 found that Kiwis throw out 1.76 billion plastic containers each year.

Like many nations though, New Zealand is exploring a raft of new measures designed to address the problem of plastic pollution.

Explaining the premise of the policies proposed during a webinar hosted by the United Nations Environment Programme, Dr Rachel Chiaroni-Clarke – a senior research and policy analyst at the Office of the Prime Minister’s Chief Science Advisor – said: “It’s all about changing our relationship with plastics.

“This was based on the premise that plastic really is a miracle material, but the problem is how we’re using it, and we really need a cultural transformation around how we value, use and dispose of plastic.”

The history of recycling plastic waste management in New Zealand dates back to 1996, when kerbside recycling schemes began in the cities of Auckland and Lower Hutt.

Nine years later, the Golden Bay area of the country launched the plastic shopping bag-free campaign – becoming the first community in the country to say no to plastic bags.

This push was led by a group known as the Golden Bay Bag Ladies, which launched the initiative on 1 January that year by handing out hundreds of cloth bags to visitors and locals.

In August 2018, it was announced that the country would phase out single-use plastic shopping bags nationwide.

Speaking at the time, Prime Minister Jacinda Ardern said: “We’re listening to New Zealanders who want us to take action on this problem.

“This year 65,000 Kiwis signed a petition calling for an outright ban. It’s also the biggest single subject school children write to me about.

“Every year in New Zealand we use hundreds of millions of single-use plastic bags – a mountain of bags, many of which end up polluting our precious coastal and marine environments and cause serious harm to all kinds of marine life, and all of this when there are viable alternatives for consumers and business.

“It’s great that many people are already changing the way they shop. But it’s important we take time now to get this right so we can help all New Zealanders adjust their shopping habits.”

This phasing out period came ahead of an outright ban on single-use plastic bags, which came into force in July 2019.

That same year the Office of the Prime Minister’s Chief Science Advisor published its Rethinking Plastics in Aotearoa New Zealand report, which set out its recommendations as to how to best tackle plastic and plastic pollution in the country.

Discussing how such a report was put together, Dr Chiaroni-Clarke explained: “We approach this issue by convening a panel of experts to bring together the evidence to inform policy.

“We also draw on the expertise of people from outside our panel with central and local government people feeding in, as well as people from industry, community groups and a whole lot of other researchers.”

The report recommends, amongst other things, that the government needs to embed “rethinking plastics” into its agenda, and that consistency in plastic packaging design, use and disposal should be created.

Alongside this, it suggests there needs to be an improvement of plastics data collection and that all options to replace plastic should be guided by environmental, social and health impacts of a product across its whole life cycle.

A year later, and following on from the Rethinking Plastics in Aotearoa New Zealand report, the country’s environment department published its own policy document – titled Reducing the impact of plastic on our environment – which is up for consultation.

As part of its plans, the government is looking to phase out more single-use and problem plastics to “reduce waste and protect the environment”.

These proposals include phasing-out some hard-to-recycle PVC and polystyrene packaging, as well as oxo-degradable plastic products.

“The level of plastic pollution in the oceans is unacceptable. It is distressing that birds, fish, whales and other mammals die from eating plastic that did not need to be made in the first place.

In response to the Rethinking Plastics in Aotearoa New Zealand report, the government committed to investigating how it can improve the depth and accessibility of data on plastic, develop a plastics research agenda and stimulate innovation.

It also said it would support education initiatives, sectors, businesses and communities to take action on plastics, develop guidelines for government agencies to encourage more sustainable use of plastics during procurement processes.

Alongside this, it’s looking to better coordinate and leverage international connections to support its plastics agenda, and aid pacific neighbours in their plastic management.