Founded by Sam Born in 1923, Just Born is a family-owned confectionery company that manufacturers sweets such as Peeps, Mike and Ike, and Zours 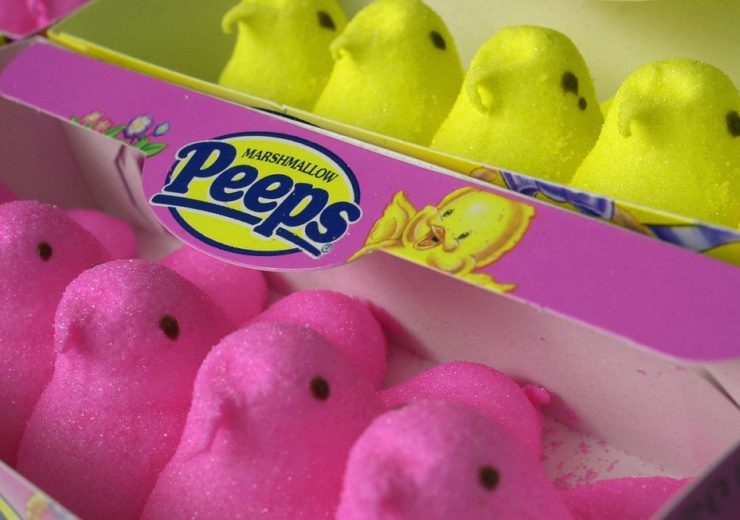 The diverse variety of formats and use of marshmallow caused Just Born to resist automating its 3D PEEPS lines for a time (Credit: Just Born)

Being a successful candy manufacturer in the US is a tough task, especially in a world of behemoths like Mars, Hershey, Mondelez, General Mills and Kelloggs, but Just Born confectionery has found a way to thrive.

Now in its third generation, the family-owned company makes national favourites like Mike and Ikes, Hot Tamales and PEEPS, the last of which is its most well-known product – particularly the chick and bunny-shaped marshmallow candies for Easter. In total, the company makes more than two billion of these sweets for four major holidays, with Easter accounting for the majority.

Due to the sheer number being made, automation would normally be a given; however, the diverse variety of formats means that, so far, PEEPS has resisted. Another key detail is that sugar coating, and being made from marshmallows, makes handling products very tough in-line – so tough that one line of the product is, almost exclusively, assembled manually.

In the PEEPS product line, the largest shape volumes are sold in clusters; this could be a 1×4 cluster of the rabbits roughly hip to hip and shoulder to shoulder per pack. This single line then orients with an identical cluster into a flow-wrapped tray. Each row is picked and placed into individual trays that provide two 1×5 rows and a 10-count pack.

The ones in a 1×4 format come in four, eight or 12-count packs (one, two or three rows). Perhaps the main consideration, however, is that the company considers them two-dimensional (2D) products. This was manageable until the roll-out in recent years of the company’s chocolate-dipped marshmallow chicks collection, PEEPS DELIGHTS.

These have to be placed into their own nesting divot in a thermoformed tray in rows of three and until recently doing this by hand was the only option as the product is so delicate.

“The amount of labour was intense; 13 to 15 people per belt for three of the four belts moving depending on the product run,” explains Randall Copeland, SVP operations/supply chain at Just Born. “That last belt needed 28 people on the line. Before this installation running that line wiped out the whole labour force, so we had to be very careful when scheduling.”

If the main objective was to address this labour issue, a secondary need was to automate repetitive dull tasks so that the human labour could remain skilled and less likely to suffer injury or strain from menial tasks.

“We started with just needing a way to make the 3D Delights line efficiently as it is a source of strategic growth for the business, and the way it was being done was not sustainable” says COO David Yale.

The company decided that if it was going to automate the 3D line they would look at how to update all lines – 2D clustered PEEPS, 3D and 3D singles. The 2D product already had its own automated lines but a new line would provide agility and help shift labour resources where they were needed.

Handling and variability were the main challenges. The former can’t touch as the products would stick together, the sugar coating would rub off and the line would get clogged.

“The marshmallow we use isn’t like the ones you buy in the bag, it is much softer,” Copeland says. “We could toughen them up for packaging if we used a bunch of additives like gelatin and starches, but who wants to eat that?

“The softness is very important for the identity of our product, but at the same time, any robot we would be using couldn’t break through that sugar layer. As soon as you touch raw marshmallow, it is the stickiest object known to man. We would have to shut down.”

The first part of the new-look line came via JLS Automation’s soft robotics gripper, which the company had encountered at the 2016 Pack Expo. JLS Automation CEO Craig Souser was approached, as his system could handle the super-soft PEEPS, as well as being advantageously located in the same state, meaning any manufacturing and maintenance was extremely close by.

Just Born selected an integrated Talon robotic pick-and-place system, developed and integrated by JLS, that would handle all primary packaging and integrate seamlessly upstream and downstream. The entire system was integrated and assembled at JLS’s facility prior to installation.

“It was our desire, and JLS’s suggestion, that we make it have enough capabilities such that you can lose an entire cell and keep going at full rate,” Copeland explained. “And usually it is not anything to do with the cell.

“Normally it is related to the wrapper, so we have very, very good wrappers, but short interruptions in product flow happen for a variety of reasons, including routine operator checks. So you need to be able to shut down a wrapper to do normal maintenance for a few minutes and not have to worry about the lines going down.”

So, how was this all achieved? At the front of the new-look line, PEEPS move to an accumulator that had been solely for cooling, but now acts as an automated buffer in case any downstream issues arise so that cooking depositing can remain consistent.

Post accumulation comes at the pick belt where the PEEPS are carried past the Talon robotic pick-and-place cells. The whole line runs on an Allen-Bradley ControlLogix housed in a master cabinet, so any issues with the cells can be addressed remotely.

“As the costs of components go up, the cost of labour goes up,” says Copeland. “We want to be able to at least hold our ground. That is, to have productivity increase at the rate that will offset our other increases.

“We are always looking for ways to improve and our primary tool, frankly, is modernisation and capitalisation by putting in equipment that gives us better speeds, capital capabilities rates and less labour, which is very advantageous to us because [some of] our workforce is retiring.”

This was a major problem at Just Born, where the workforce was ageing out and no one is able to replace them. The new system provided added benefits in that it solved this thorny issue.

“Nobody lost a job when we added this automation,” explains Copeland. “Conversely, I just didn’t have to hire so many people and it enabled me to put them where I need them, which is growing the Mike and Ike, and Hot Tamales business. It really helped out in a way we never even anticipated.”

JLS and Just Born also noted that if sugar was not consistently and evenly distributed onto each PEEP, handling on the robots could descend into a sticky mess. To resolve this, the quality control was tightened where shaping or processing occurred.

There was no major sweeping change implemented but through multiple smaller adjustments the total amount of scrap was greatly reduced. “The additional QC wasn’t just to keep the robots happy,” Souser says.

Just Born also wanted to make an improvement in terms of food safety, and JLS provided some of the construction that it normally would only provide in a true wash-down environment.

Just Born wanted the most sanitary picking system it could get. The grippers are cleaned during changeovers between PEEPS formats – 2D clusters, 3D clusters or 3D singles – and undergo a sanitation review.

“You remove the actual grippers at the point where it is connected to the arm, and then you literally dip the tool in a bucket of no-rinse sanitising solution – that’s all there is to it,” explains Copeland.

“Changeover on a gripper is 30 seconds. Basically, everything from the pick belt down is wash-down capable, and all the upstream conveyors get sprayed down.”

Since this project went from hand-packing to automated packing, a gripper changeover is analogous to people throwing the gloves away between different runs. Instead of throwing gloves away, they are cleaning these tools.

Sugar build-up was also a concern, but the team realised that once sugar builds up to a minimal degree to cover the grippers, it ceases build-up. A lot of testing and validation occurred at JLS prior to the project, before it was revealed not to be a problem.

Just Born bosses on having flexibility in production lines

While there was no question that this was one of the biggest projects for Just Born, it has not only successfully addressed variability and product fragility issues, but has also shifted productivity throughout the plant, not just for the original cause of the concern, the 3D PEEPS line.

“We now have so much flexibility,” Yale says. “The system gives Randall [Copeland] and his team the capability of also doing our regular PEEPS on that line in a variety of different configurations and packs, which we have never had the flexibility to do on any of our lines before.

“We can do bunnies, chicks, regular, filled, bottomed. It is pretty amazing having that jack of all trades line that is also very efficient, where as a line before had 20-some odd people packing product into trays, which was inefficient.

“We wanted a way to justify the build of a production allocation to that line and we are getting it. Our flexibility in manufacturing, of product type and also of human-labour allocation to production, have all been positively impacted.

“It was a win on many different fronts. It is a facilitator for growth, which I think is the best way to think about it.”

Copeland agrees. “It is now more economically efficient to sell these really nice premium products; the efficiency matches that of our larger-volume products, and this has enabled us to go back into Walmart and get them excited about it, and getting more listings than we could have if we didn’t have this. We can look at capital equipment as a sales aid.”

This article originally appeared in the autumn 2019 edition of Packaging & Converting Intelligence. The full issue can be viewed here.